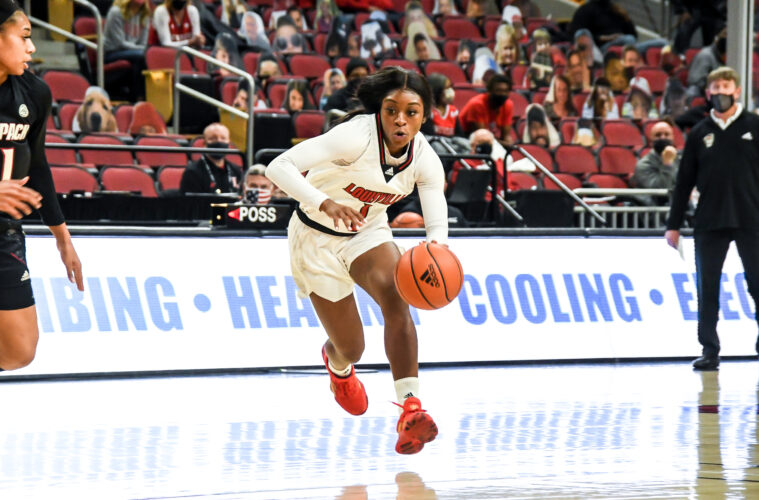 No. 1 Cards Suffer Their First Loss Against A Tough NC State

It was the game we have waited all season for and after a reschedule a few weeks ago, the time finally arrived for the top ranked Cardinals to host No. 4 North Carolina State. Prior to this afternoon, this was set to be a matchup between the No. 1 ranked team and the No. 2 ranked team, but after their overtime loss at Virginia Tech last week, the Wolfpack dropped to No. 4 in the polls. Either way, this would be the biggest test of Louisville’s schedule so far this season.

Olivia Cochran got Louisville on the board early and you could tell within the first two minutes of play that this team was focused and ready to play. There was plenty of good ball movement on the court resulting in 6 players posting points in the first quarter. Louisville also looked very engaged on the defensive end, recording 7 rebounds and 2 blocks through the first quarter. Liz Dixon and Olivia Cochran had both blocks prior to the first timeout of the game. Louisville did struggle rebounding the ball on the offensive end, having zero offensive rebounds at the end of the first period. The second quarter seemed like a different story when we saw a couple of ugly turnovers accompanied by what appeared to be plenty of mental breaks, causing Louisville to hand the lead to NC State. Luckily, NC State went cold on shooting and had a few bad turnovers themselves, which helped keep the game close. The ball movement from Louisville seemed to be non-existent during the second period and shooting was ice cold. The Cards scored 7 points during the second quarter and trailed by 4 points to NC State at the half. Both teams played a sloppy second quarter with Louisville going just 3-13 and the Wolfpack going 4-17.

I am not sure what Jeff Walz said to this team in the locker room, and I am glad I wasn’t in there, but they came out in the second half with increased aggression and it showed. It was most noticeable when Olivia Cochran got under the basket and took the ball and the soul of an NC State player early in the third period. Although they were showing aggression, it was sloppy, and they were unable to get the stops they needed allowing NC State to go on a 9-2 run and gain a 10-point lead. The Cards had no ball movement, and it was becoming clear that they were going to have to fight incredibly hard to come out of this game with a win. The Cards were giving up too many second chance points and exposing themselves to poor shot selection. Toward the end, and I mean the very end, of the third quarter Louisville did see a few shots fall. This included Dana Evans draining a three pointer as the shot clock expired. Going into the fourth quarter, Louisville trailed by 5 points but had a little bit of momentum. If there is one thing we know about NC State, it’s that they’re good on both ends of the court and they proved it tonight. The Cards continued to struggle getting stops, but when they finally got two in a row, they also managed to turn the ball over on the other end of the court. At this point, nothing was going well for Louisville and as time ticked down, it appeared the No. 1 team would be facing their first loss of the season. Dana Evans and her 29 points would not be enough to get the Cards a win and now the number one team in the country has a 14-point loss on their resume.

The Wolfpack shot 43.8% in their 74-60 victory and outrebounded the Cards 44-29. Dana Evans led the team in scoring with 29 points and was the only Louisville player in double digits for the night. Olivia Cochran led the team in rebounding with 9, followed closely by Liz Dixon who had 7.

Louisville will travel to Boston College this Thursday, February 4th for an 8:00 p.m. tipoff.