The University of Louisville men’s soccer team released its 2017 spring exhibition schedule and the slate is highlighted by a trio of home matches.

The Cardinals begin their five-match spring schedule by hosting Indy Eleven of the North American Soccer League on Friday, March 10 at 7 p.m., ET. Louisville will then take to the road for a visit to the Chicago Fire of Major League Soccer on Saturday, March 25 at a time to be determined.

Daniel Keller would go on play at the University of Louisville, going from a redshirt year in 2010 to being named the captain of the Cardinals for his senior season last fall.  Keller’s standout play with Louisville caught the eyes of defending Major League Soccer champion LA Galaxy, who selected him in the third round (62nd overall) of this January’s MLS SuperDraft.

During his five years with the Louisville program, Keller would go from a redshirt walk-on to a senior captain, scoring six goals and adding four assists across his 74 appearances from 2011-14.  During his senior season last fall, Keller started all 22 games and scored three goals – all game-winners – for the Cardinals en route to an 11-8-3 record in their debut season in the Atlantic Coast Conference and a fourth straight appearance in the NCAA College Cup postseason tournament.

Stephan Cleveland then completed his college career at the University of Louisville, appearing in 22 games for the Cardinals in 2016 and earning 10 shutouts en route to a .72 goals against average.

UofL will return home to host Wisconsin on Saturday, April 1 at 7 p.m., before closing the home slate against Xavier on Friday, April 7 at 7 p.m. The Cardinals will conclude the spring at Lindsey Wilson College on Friday, April 14 at 7 p.m. All home matches this spring will be played at either Dr. Mark and Cindy Lynn Stadium or Cardinal Park with the specific location to be announced the week of the games.

Louisville closed the 2016 season ranked No. 6 nationally in the final NSCAA Top 25 and finished with a 14-6-2 record after advancing to the quarterfinal round of the NCAA Championship for the fourth time in the last seven seasons. 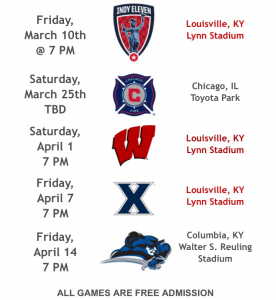