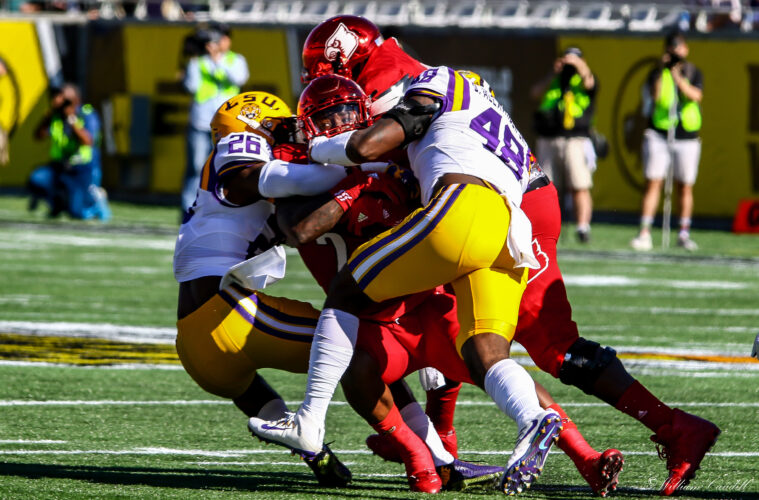 Louisville Football lost its first 3 games of 2015….and the last 3 games of 2016.  The 2015 Cardinals came in as youthful enthusiastic group willing to fight through adversity, the 2016 group limped home after achieving a 9-1 record, #5 ranking and a player with enough clout to win the Heisman Trophy despite losing his final 2 regular season games.

The Cards had a chance at redemption vs. LSU to salvage the euphoria of the earlier part of the 2016 season.  Instead a team ravaged with injuries, off the field incidents and without its offensive coordinator was embarrassed by the Louisiana State Tigers.  Injuries in football happen…… there are always players who find themselves at the wrong place at the wrong time…. and there is even controversy that can occur to any college football program.  But to have ALL of these things happen to UofL Football from November until kickoff of the Citrus Bowl was just too much.

Louisville didn’t look prepared offensively vs. Houston as the Wakeyleaks story was breaking.  Lonnie Galloway, Louisville’s passing game coordinator, would later be implicated and eventually suspended for the Citrus Bowl. In the Citrus Bowl, the Cards once again didn’t look prepared to deal with the pressure of the LSU Defense.  Late in the 3rd Quarter the Cards had just 88 yards on 37 plays and hadn’t converted a 3rd down.  The game was long over by this time.

Defensively the Cards couldn’t get off the field.  LSU held the ball for over 10 minutes of the 1st quarter. The Cards were playing without James Hearns, Josh Harvey-Clemons, Shaq Wiggins and Trumaine Washington.  On play #1 the Tigers attacked Ronald Walker for a long gain….. but the problem all afternoon was running back Derrius Guice who finished with 26 carries and 138 yards.  Guice broke more tackles vs. the Cards than Bo Jackson in Tecmo Bowl as Ed Orgeron and the LSU took advantage of a personnel & physicality challenged Cardinal Defense.

But the biggest problem may lie within the offensive line. The games in which Louisville either struggled or lost in 2016:

LSU’s defensive front WORKED the Louisville Offensive Line in the Citrus Bowl, shut down the Cardinal running game and completely disrupted Heisman Winning Quarterback Lamar Jackson.  Jackson struggled to get to the back of his drop before having to adjust to the pressure and as a result the Cardinal Offense…..the #2 offense in the country….. never got going.

No matter what the actual cause for Louisville’s collapse to end the 2016 season the answer MUST be found in the off-season.  LSU was more physical, played with more purpose and the Tigers were more prepared.  That’s on the coaches and its on the players.