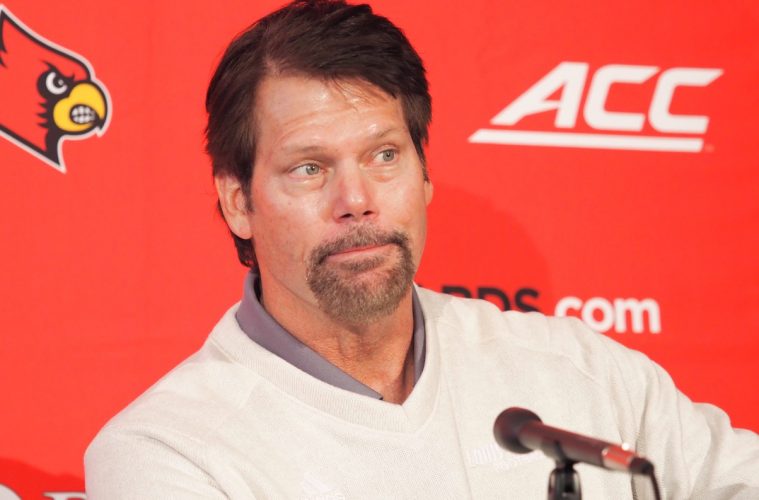 University of Louisville defensive coordinator Brian VanGorder is back where he belongs – on the field.

After serving in an off-the-field role at Oklahoma State last season, VanGorder took over the Cardinals’ defense this winter and is thrilled to doing what he’s always done – coordinating defenses.

VanGorder, who brings 18 years of experience coordinating defenses in the National Football League and the collegiate level, is one of the most respected names throughout the country. He had tremendous success at Georgia and with the Atlanta Falcons.

“I’m excited to be back on the field,” VanGorder said. “Being with coach Petrino is important for me because he’s a football coach. His expectations for coaches and players are extremely high. I like that kind of environment. I’m glad to be back.”

Talking about VanGorder at his press conference to open spring practice on Monday, head coach Bobby Petrino referred to his new hire as “meticulous, which is a tremendous compliment to a coach who’s in charge of running a defense that faces some of the most complex offenses in the country.

“It means I’m very organized and detailed,” VanGorder said. “You want to be well-organized and pay attention to detail. When running a defense, you have to have your players in the right position and not make things very complicated for them.”

Being hired in January, VanGorder hasn’t had much time to learn the number of new faces and is busy trying to find replacements for the seven starters who’ve departed after last season.

“Kind of been the good, bad and the ugly,” VanGorder said following Wednesday’s practice. “And that’s kind of typical in what we expected. Got a new system going in, lot of young players. The thing I’m pleased about right now is the effort’s been really good.”

On the field for only the second day, VanGorder has a number of things he hopes to accomplish this spring but has put an emphasis on two major categories.

“I like the idea of them really learning how to focus in on doing their job,” VanGorder said. “Understanding that this is the greatest team sport of all. One guy depends on 10 other guys and counts on him. Very, very important that they really learn their position and their job.”

Learning a new system is never an easy task, but junior defensive tackle GG. Robinson has adapted well to the new schemes and has appreciated what VanGorder has brought to the field and the meeting rooms in a short period.

“It’s pretty hard,” Robinson said. “However, I feel like I’m a pretty smart player so it’s not been hard for me to learn. I like his style of coaching. He’s energetic and in our face.”

VanGorder comes in with a reputation for being intense and aggressive, and Robinson has certainly seen that from his new defensive leader after a few months and the first two workouts.

“I fully believe in everything that he’s preaching to us,” Robinson said. “I know we only have about 20, 30 percent of the playbook in right now, but I like all the plays and I like the scheme that he’s bringing.”