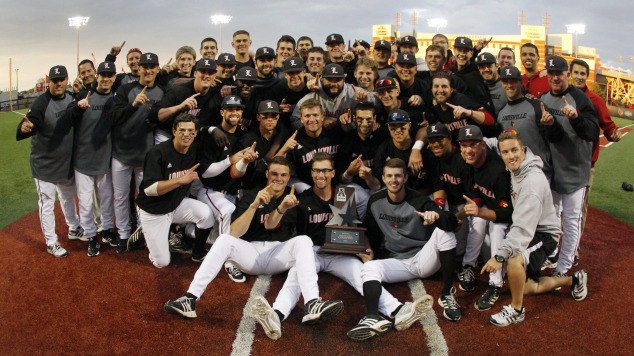 Freshman lefty Josh Rogers struck out a career-best 10 and senior outfielder Jeff Gardner homered as the No. 5 Louisville baseball team clinched sole possession of the 2014 American Athletic Conference regular season title with a 5-1 win over Cincinnati on Friday night at Jim Patterson Stadium.

With their third straight conference championship and the fifth in the last six seasons, the Cardinals (42-13, 18-5 American) locked down the No. 1 seed in next week’s American Athletic Conference Championship at Bright House Field in Clearwater, Fla. Louisville will close the regular season and will attempt to complete a series sweep of the Bearcats (22-30, 6-17 American) on Saturday at 1 p.m., ET at Patterson Stadium.

Making his seventh start of the season and the first on the weekend, Rogers (New Albany, Ind.) allowed only one run on four hits without issuing a walk in a career-long eight innings to earn his second career collegiate victory. In surpassing his previous best strikeout total of six, Rogers became the second Louisville pitcher this season to finish with 10 or more strikeouts in a single game joining Kyle Funkhouser, who had 12 last week at Temple.

At the plate, Gardner (Louisville, Ky.) was 3-for-3 with his team-leading eighth home run of the season, a double and two RBI as the Cardinals finished with an 11-4 advantage in hits. Freshman Nick Solak (Woodridge, Ill.) finished 2-for-5 with his first career collegiate home run and scored twice, while senior outfielder Cole Sturgeon (Owensboro, Ky.) was 2-for-4 with a run driven in.

Cincinnati struck first on Friday plating a run in the second inning against Rogers when second baseman Devin Wenzel connected for a RBI double to center to plate Ian Happ and a 1-0 lead. The scoring chance started with a single by Happ, who stole second before Wenzel’s double.

Louisville started its scoring in the fourth with a pair of runs against Cincinnati starter Connor Walsh. Gardner led off the inning by crushing a 1-0 pitch over the right field wall for his 22nd career home run and the third in the last seven days. Later in the inning, freshman outfielder Corey Ray (Chicago, Ill.) singled to right and scored on a RBI double down the left field line by senior catcher Shane Crain (Lexington, Ky.) for the 2-1 lead.

An inning later, Solak sent a 2-0 pitch from Walsh over the wall in left center for a solo home run and a 3-1 advantage. Sturgeon added to the lead in the sixth inning with a RBI single to right field to score Solak, who singled and moved to second on a balk by lefty reliever Colton Cleary. Louisville closed the scoring with a run in the seventh on a RBI double off the right field wall by Gardner to score junior first baseman Grant Kay (Omaha, Neb.), who led off the frame with a double down the right field line.

Following Rogers on the mound for the Cardinals was sophomore righty Jonah Philley (Louisville, Ky.), who worked a perfect ninth inning with one strikeout. Walsh was charged with the loss and dropped to 5-8 on the season for Cincinnati after allowing three runs on seven hits in 4.1 innings.

Prior to Saturday’s regular season finale, the Cardinals will honor their five senior players and one senior manager with a pregame ceremony scheduled to begin at approximately 12:45 p.m.

– The Cardinals have won nine straight against the Bearcats and 17 of the last 19 overall in the series.

– The Cardinals improved to 37-0 this season when leading after the eighth inning and have won 92 straight games overall when entering the ninth inning with a lead.

– Louisville is 32-0 this season when scoring five or more runs and has won 48 straight games overall when reaching the five-run plateau.

– The Cardinals are 28-4 this season against righty starters.

– Louisville has allowed two or fewer earned runs in 32 of 55 games this season.

– Prior to Friday’s outing, Josh Rogers had finished with six strikeouts twice this season – April 8 at Purdue and April 15 against Kentucky.

– The eight innings for Rogers surpassed his previous long outing of seven innings against Western Kentucky on April 22.

– Rogers joins Kyle Funkhouser (May 9 vs. Temple) as the only two pitchers to pitch eight innings this season Louisville.

– With three hits and two RBI on Friday, Jeff Gardner leads the Cardinals with 23 multiple hit games and 20 multiple RBI games this season.

– Gardner moved into a tie for seventh in career doubles at Louisville with Stewart Ijames (2008-12) after connecting for No. 52 on Friday night.

– Finishing with two hits, Cole Sturgeon ranks second on the team with 22 multiple hit games in 2014.