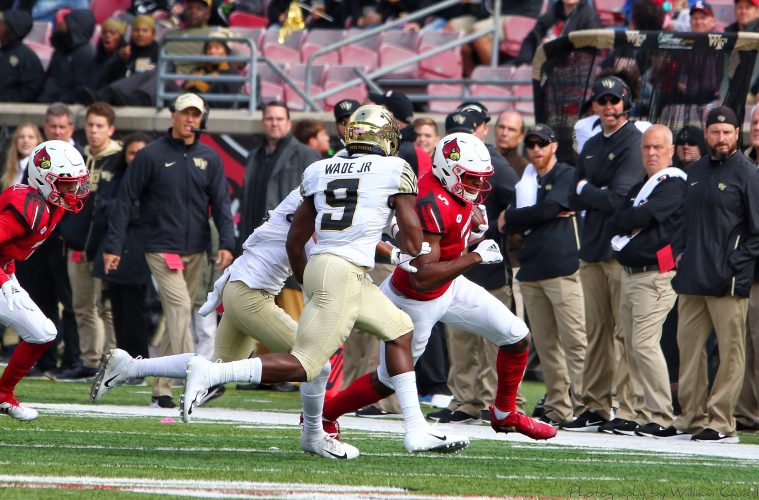 Outside of a 34-point fourth quarter in last season’s football matchup, Louisville and Wake Forest have played a couple of games down to the wire.

The Demon Deacons led the Cardinals last year 12-3 at Papa John’s Cardinal Stadium before Louisville exploded for a 44-12 win. In 2015, Lamar Jackson threw two touchdown passes and Louisville forced five turnovers in the second half in a 20-19 victory over Wake Forest in its first trip to Winston-Salem.

In their first season in the Atlantic Coast Conference, the Cardinals battled to a 20-10 win at home in 2014.

“Wake Forest is a tough team,” quarterbacks coach Nick Petrino said. “It seems like it’s the same guys we’ve been playing for the last couple of years. They have the same guys on the defensive line and the same guys in the secondary. They are a well-coached team, and their two defensive ends are two of the best in the ACC.”

The Demon Deacons, who have dropped three-straight games, boast eight upperclassmen in the starting lineup, and the Cardinals’ coaching staff is familiar with their personnel.

“They have a lot of experience,” Petrino said. “They are an older team. It seems like all their guys are seniors. We played against their front four from last year and their secondary is back. They are a very experienced team.”

One of those veteran players is Duke Ejiofor, who is in the top 10 nationally in tackles for loss and sacks. With the senior leading the charge, the Demon Deacons have one of the nation’s top defenses, especially against the pass.

“They’re really active on the defensive front,” head coach Bobby Petrino stated. “Both defensive ends that we played against last year – both guys do a really good job of rushing the passer and defending the run. They move their inside guys a lot. They’re very experienced at linebacker. They’re guys we’ve played against for a number of years, so they’ve defended people well. People haven’t scored a lot of points on them. I think it’s going to be up to us to mix it up and be able to run it and throw it.”

With Wake Forest being so stout against the pass, the Cardinals could take a page out of last week’s game plans when they ran the ball 44 times in a 31-28 win at Florida State. For the second consecutive week, the Cardinals totaled 293 yards on the ground and were able to control the line of scrimmage.

Running for 181 yards in his last two games, senior running back Reggie Bonnafon benefitted from the emphasis on the running game. He notched his first 100-yard game with 107 yards in a loss to Boston College and added 74 yards versus the Seminoles.

“His acceleration through the hole, working hard at finishing runs,” Bobby Petrino said. “He’s working hard at being the guy that does the hitting. But his acceleration through the hole has really changed. You noticed it in practice where he started bursting right as he saw the opening. He’s doing a good job of doing what we call ‘hugging the wall,’ which keeps the linebacker to the blocks, and if you come out too soon, the linebacker can leave the block and make the tackle. So, he’s setting the blocks better.”

The Cardinals used the running game last season to outscore the Demon Deacons, rushing for 346 yards in the big win. It was the highest output of the season, and Bonnafon hopes the Cardinals can duplicate the same performance.

“We just have to put the work in,” Bonnafon said. “We have to have a good week of practice, and it will translate to the field.”