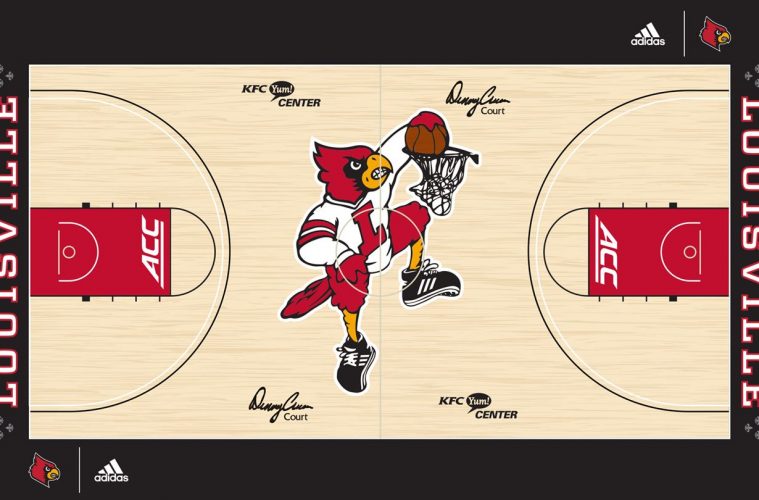 University of Louisville Vice President, Director of Athletics Vince Tyra unveiled a new design for Denny Crum Court in the KFC Yum! Center on Thursday morning. The new design features the “Dunking Cardinal” at midcourt, while the baselines pay homage to both Freedom Hall and the city of Louisville.

“No other Louisville logo elicits more affinity across all generations of our fan base than our Dunking Cardinal,” said Tyra. “After a lot of thought and consideration, we determined that showcasing that was something that would really resonate with our fan base. We are excited about both the men’s and women’s upcoming seasons and can’t wait for our fans to see their new court.”

Louisville athletics worked in conjunction with adidas Basketball on the timely new court design, which required an update once the NCAA Rules Committee ruled to move the Division I men’s 3-point arc back to match the international distance of 22 feet, 1 ¾ inches.

The updated floor design seeks to honor the storied legacy of Louisville Basketball in a modern way while setting the stage for the next chapter for both the men’s and women’s basketball programs.

Great care was taken to slightly update the Dunking Cardinal mark for clear brand recognition on broadcast television, while retaining the vintage appeal. Fans may notice that the facial feathers, eyes and beak were refined to more closely align with

The baseline “Louisville” font pays homage to the iconic scorer’s table signage at Freedom Hall, while the tone-on-tone fleur de lis that appear in the corners of each baseline pay tribute to Louisville’s city flag.

Work will begin on the new floor in mid-August and will be completed prior to the start of the men’s and women’s 2019-20 seasons.

Men’s basketball season tickets are on sale now, including reduced pricing throughout the arena, and are available at www.GoCards.com/mbbtix.