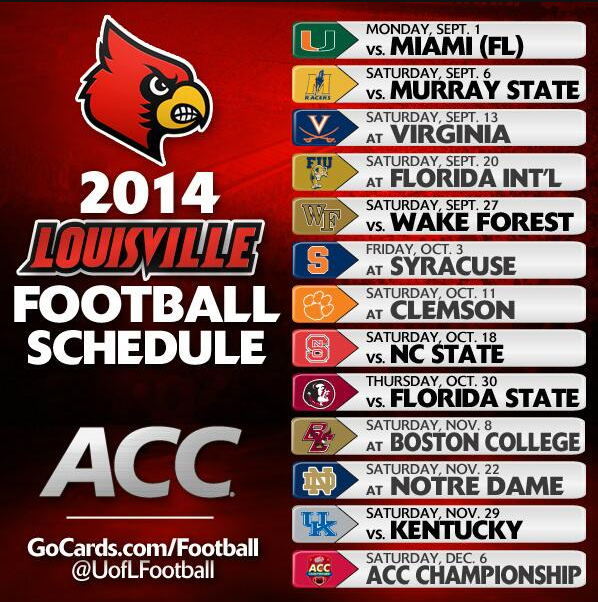 LOUISVILLE, Ky. – The University of Louisville football program is ushering in a new era in its history in the fall when it begins play in the Atlantic Coast Conference. Louisville is scheduled to host Miami (Fla.) at Papa John’s Cardinal Stadium for a Labor Day primetime opener, the ACC announced Wednesday.

The Cardinals will compete in the Atlantic Division of the ACC with Wake Forest, Syracuse, NC State, Florida State, Clemson and Boston College.

“As a head coach, this is the type of schedule you want to play each year,” head coach Bobby Petrino said. “To open the season against a high-profile opponent like Miami on Labor Day is every exciting, as we officially begin play in the ACC. It’s a very challenging schedule, but one that our fans and players can be really excited about.”

The Cardinals and Hurricanes, who met in the 2013 Russell Athletic Bowl, will clash on Sept. 1 at 8 p.m. in front of a national ESPN television audience. Louisville handed Miami a 36-9 defeat on Dec. 28, 2013, in Orlando, Fla. This will be the first time the Cardinals open the season with a conference game since 1973, when Louisville lost in overtime to Memphis State on Sept. 8.

Petrino and the Cardinals are also familiar with Wake Forest, having defeated the Demon Deacons 24-13 in the school’s first BCS appearance in 2007. Louisville last faced NC State in the 2011 Belk Bowl. In the last appearance versus Florida State, the Cardinals knocked off the fourth-ranked Seminoles 26-20 in overtime in 2002 on a nationally televised Thursday night contest

The Cardinals’ road ACC games consist of trips to Virginia (Sept. 13), a Friday night contest versus Syracuse (Oct. 3), Clemson (Oct. 11), and Boston College (Nov. 8). The Cardinals haven’t faced Virginia since 1989 and BC since 1998. Louisville and Clemson have never faced each other.

After opening the regular season with a conference game on Sept. 1, Louisville begins its non-conference slate just five days later with a game versus Murray State (Sept. 6). Louisville travels to FIU (Sept. 20) and will play at Notre Dame (Nov. 22) for the first time in school history before closing the regular season for the first time at home against Kentucky (Nov. 29).

For those interested in purchasing season tickets for the upcoming year, please fill out the season ticket application below and a Louisville Cardinals ticket representative will contact you very soon.

For prices based off of the 2013 football season click here: Seating Map. 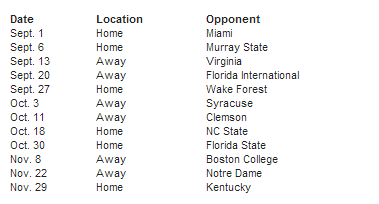 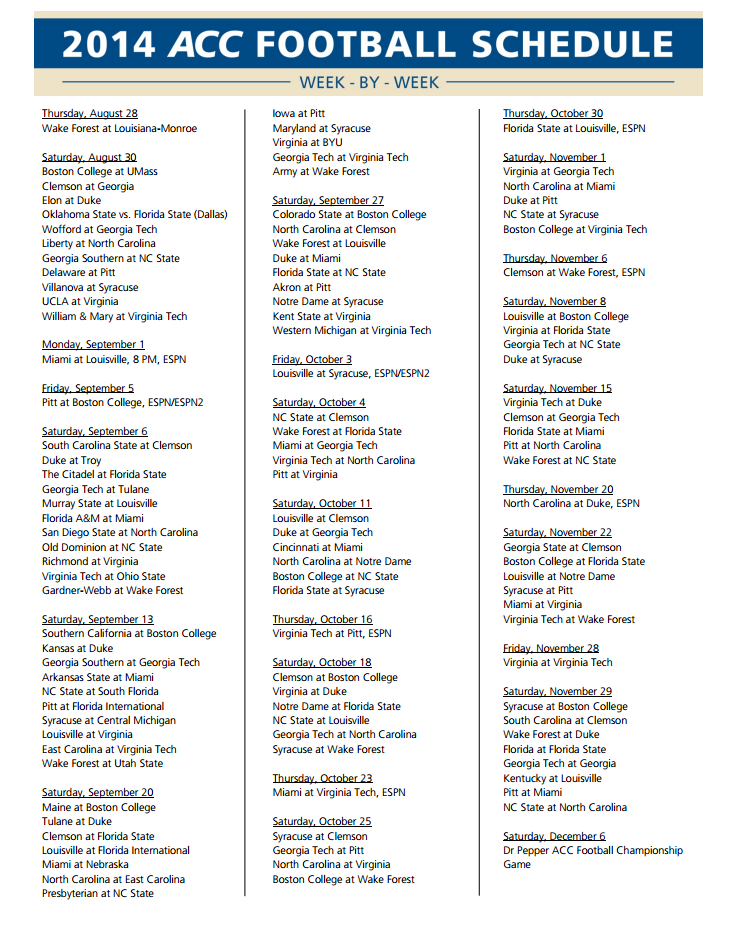 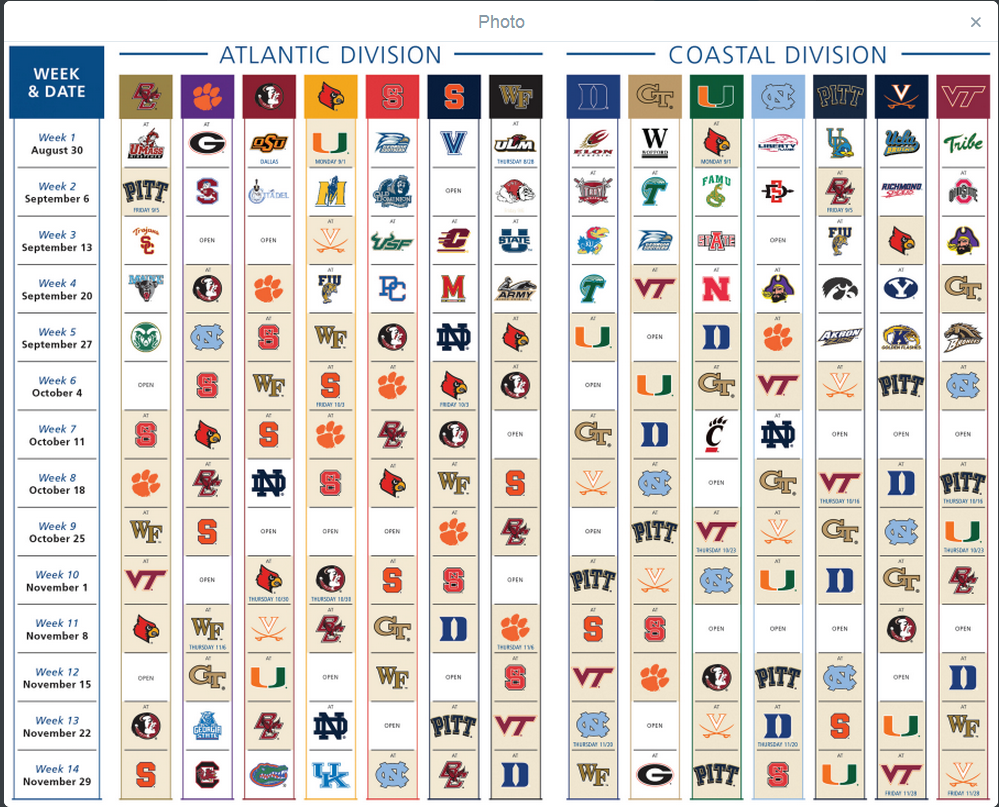 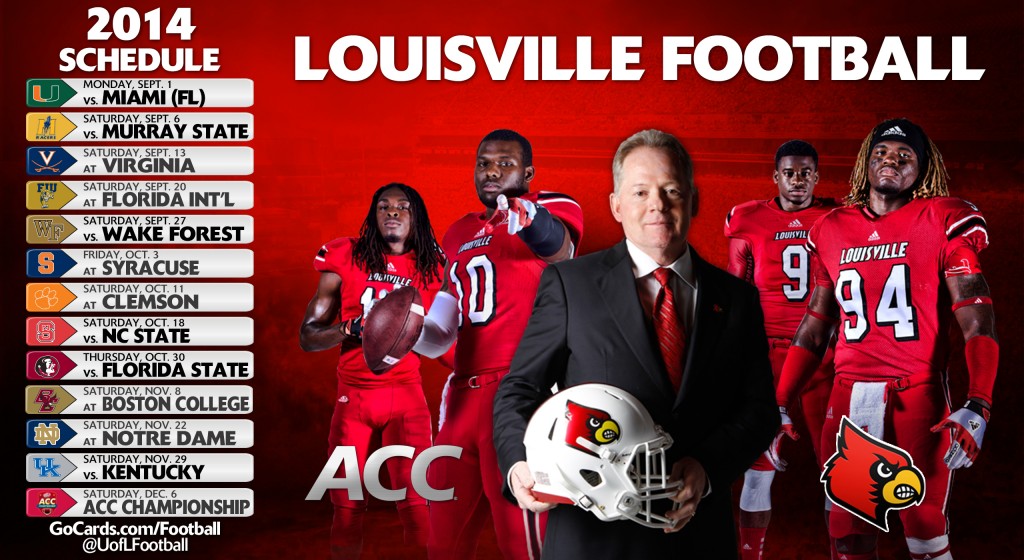 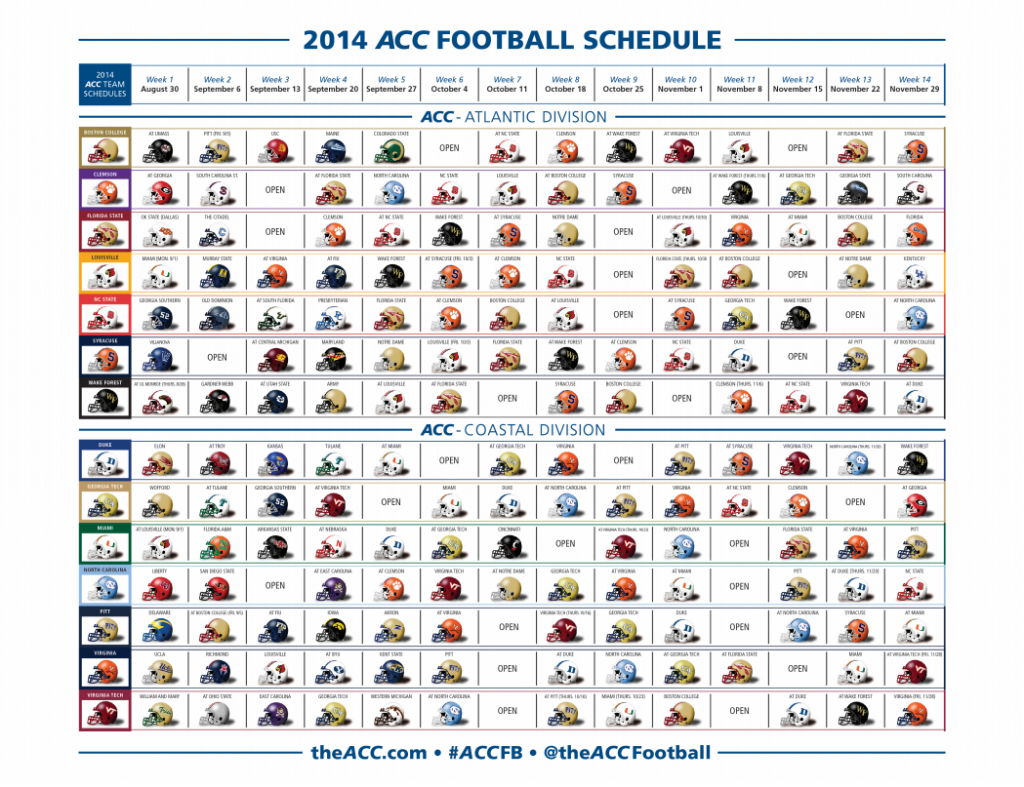