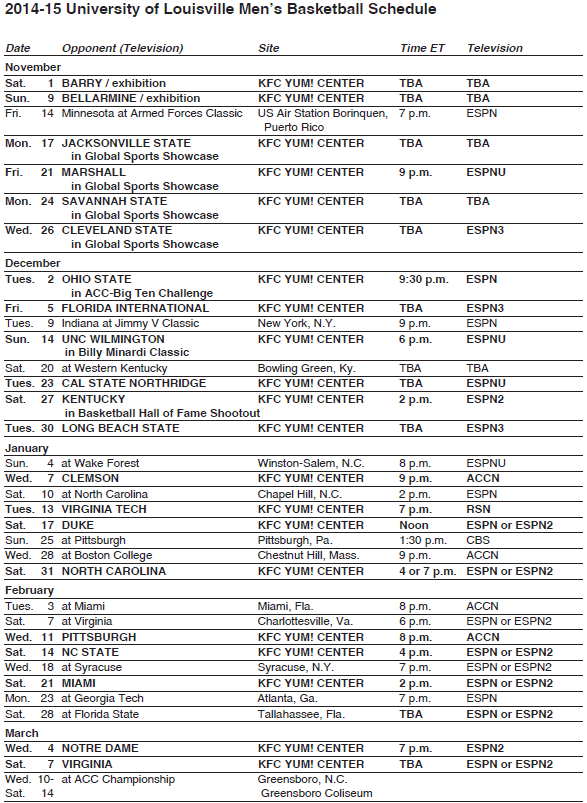 “This will be one of the biggest challenges we’ve had since I’ve been at Louisville,” said U of L Coach Rick Pitino, whose team has played a schedule ranked among the top 12 toughest by the ratings percentage index (RPI) in six of the last seven seasons. “It’s not only a fantastic league schedule, where three of our four repeat opponents are ranked high in the polls, but our non-conference schedule which includes three Big Ten schools will present a significant task.  We believe our veterans will be prepared for it and certainly we look forward to the challenge.  This should be one of the most exciting schedules in U of L history with our first season in the ACC.”

Including a pair of exhibition games, 12 of the Cardinals’ first 15 games will be played at home in the KFC Yum! Center, U of L’s spectacular 22,000-seat home arena.  The Cardinals will face their first outside competition in an exhibition game against Barry on Nov. 1 in the KFC Yum! Center.  Bellarmine, which like Barry reached the NCAA Division II tournament, will provide the opposition in U of L’s second home exhibition game on Nov. 9 with a team coached by former U of L assistant Scott Davenport.

U of L officially opens its season against Minnesota on Nov. 14 on ESPN in the Armed Forces Classic, to be played at U.S. Air Station Borinquen, a U.S. Coast Guard base in Puerto Rico.  The 2014 NIT Champion Golden Gophers are coached by Richard Pitino, a former U of L assistant and son of the Cardinals’ Hall of Fame head coach.

Ohio State visits Louisville on Dec. 2 for the ACC-Big Ten Challenge on ESPN, followed by another home game against Florida International onDec. 5.  The Cardinals will face Indiana in the Jimmy V Classic on Dec. 9 on ESPN in New York’s Madison Square Garden.

Next up for Louisville will be a home game against UNC Wilmington on Dec. 14 (ESPNU) in the 13th Annual Billy Minardi Classic, an event named in memory of Pitino’s brother-in-law who died in the Sept. 11, 2001 terrorist attacks on the World Trade Center.  The Seahawks are guided by first-year head coach Kevin Keatts, who served as an assistant at Louisville the last three seasons.

After Louisville’s first true road test in a Dec. 20 game at intrastate foe Western Kentucky, the Cardinals return for three straight at home beginning with a Dec. 23 contest against Cal State Northridge (ESPNU).  It will be the third team Louisville faces coached by former Cardinal assistant, as the Matador’s coach Reggie Theus was a U of L assistant coach from 2003-05.

The Cardinals face intrastate rival Kentucky on Dec. 27 in the KFC Yum! Center in the ESPN2-televised Basketball Hall of Fame Shootout,with a portion of the game proceeds benefitting the non-profit Naismith Memorial Basketball Hall of Fame in Springfield, Mass.  Louisville will close out 2014 against Long Beach State on Dec. 30 in its final non-conference game on the schedule.

Louisville’s ACC schedule will include a challenging slate of 18 games, including two games each against Pittsburgh, Virginia, Miami, and North Carolina.  The Cardinals will have designated rivals Pittsburgh and Virginia both home and away each of the next two seasons as each team will face 10 opponents once and four twice.

The Cardinals will open the new year and open play in the ACC with a road trip to Wake Forest on Jan. 3.  Clemson will be the Cardinals’ first home ACC opponent on Jan. 7.  The ACC Tournament will be staged in the Greensboro (N.C.) Coliseum on March 10-14.