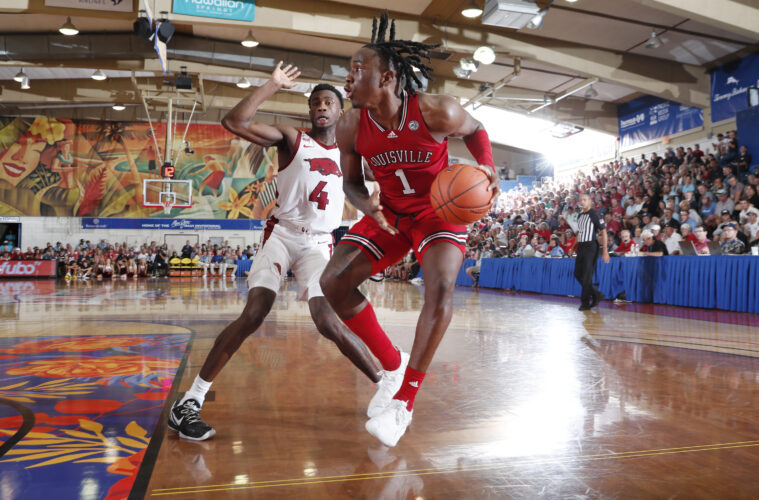 The Louisville men’s basketball team continues play in the Maui Jim Maui Invitational Tuesday against No. 21/20 Texas Tech at 2:30 p.m. ET in Lahaina, Maui, Hawaii. The game will air on ESPN2.

The Cardinals opened the tournament Monday with an 80-54 loss to No. 9/10 Arkansas. Louisville trailed by five with 14 minutes left in that contest before a 26-4 run by the Razorbacks. Texas Tech also lost to a top-25 opponent on Monday with a 76-65 defeat against No. 10/8 Creighton.

• The Cardinals scored more points off the bench against Arkansas (29) than they did in their first three games combined (25). That was due in large part to a team-high 13 points from freshman forward Kamari Lands.

• Louisville was the first team since at least 1980 to lose its first three games of the season by one point each, according to ESPN Stats & Info. Including last year’s 51-50 loss to Virginia in the ACC Tournament, the Cardinals were the first team to lose four straight games overall by one point since Stetson in 1981-82.

• Per Ken Pomeroy, Louisville is 338th in the country in Division I experience with an average of 0.91 years.

The Cardinals shot 34% from the floor and leading scorer Jordan Nwora had only 14 points.

Moretti buried two straight 3s midway through the second half for an 11-point lead that gave the Red Raiders the space they needed. Chris Clarke hit another 3 for Texas Tech and it went into a timeout with a seven-point lead.

Louisville could never make a run, and Nwora was held below his 21.4 scoring average.

The Cardinals missed 20 of 28 shots overall from the floor in the first half and were limited from 3-point range, the kind of shooting that gave a scuffling team like Texas Tech a chance.