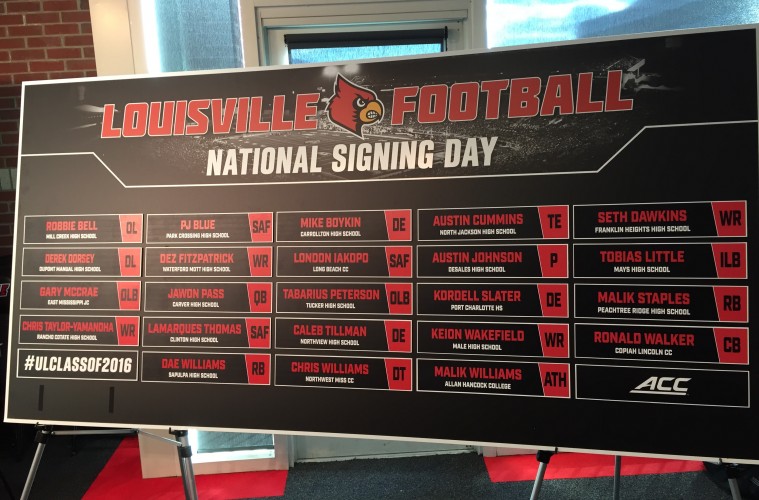 University of Louisville football head coach Bobby Petrino will present the 2017 Signing Day class at a National Signing Day Party on Wednesday(Feb. 1) at 6 p.m. in the Brown and Williamson Club, located on the third floor of Papa John’s Cardinal Stadium.

Fans will get an inside look at the entire signing class, which is expected to be among the nation’s top-ranked groups and the best in school history.

Petrino and his assistant coaches will provide comprehensive analysis on all signed members of the 2017 class with exclusive video highlights.

Admission to the Signing Day Party is free and open to the public. Doors will open at 5:30 p.m. for general admission seating.  Concession stands and a cash bar will be available during the event as well as fan activities and giveaways while supplies last.  Fans should enter the stadium at Gate 6 of Papa John’s Cardinal Stadium and parking is available at no charge.

The season ticket renewal process for the 2017 Louisville football season will begin in early February.  Current season ticket holders will receive an email copy of their invoice and can renew online by logging into their My Cardinals Account once available in the coming weeks. (https://oss.ticketmaster.com/html/home.htmI?team=uofl) Along with their season ticket invoice, details regarding the season opener at Lucas Oil Stadium vs. Purdue will be included for season ticket holders to request tickets.