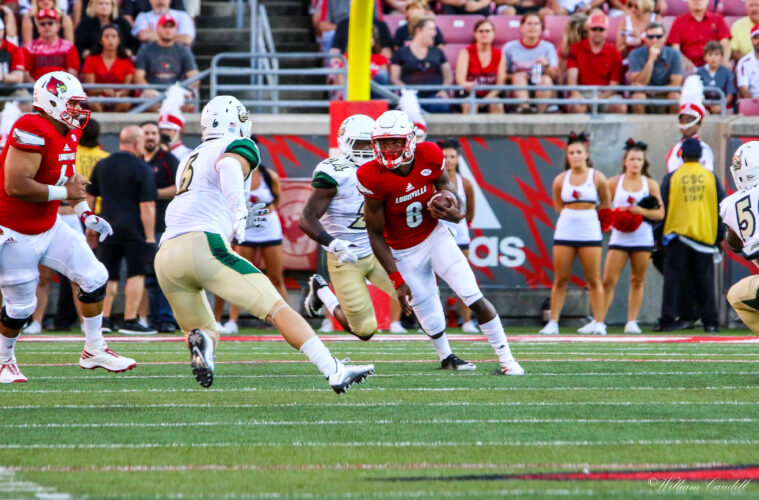 Bobby Petrino enters his third year in the second stint at Louisville with high expectations, mostly centered around a large group of returning players and one superstar in the making, Lamar Jackson. But something just feels different now. The buzz being generated from the Louisville football program is growing, rapidly, and on a national scale. So what, they crushed a terrible Charlotte team at home. Louisville did exactly what was expected. The difference is others didn’t do what was expected. As we sat in Papa Johns Cardinal Stadium the scoreboards flashed the Appalachian St./Tennessee score and most were taken aback as the only other game featuring a “top tier” opponent that night struggled. They were expected to compete for the SEC East! At least that is what the national pundits told us. On the flip side of the coin Lamar Jackson put up an extraordinary 8 touchdowns in one half of play as the Cards rolled the 49ers.

How does Lamar Jackson build off of the hype from a great end to the 2015 year and an impressive spring? Lighting up Charlotte’s defense to the tune of 56 points in the first half is how. Louisville was named a pre-season dark horse by some to be in the College Football Playoff and Lamar Jackson a pre-season dark horse for the Heisman. Us Louisville fans knew what we had and the potential in Lamar Jackson and virtually everyone nationally recognizes what Bobby Petrino can do with a talented offense. What the Charlotte game provided was an essence of validity. All those saying “Watch out for Louisville” or “Keep an eye on Lamar Jackson” just collectively stated “I told you so”.

Am I saying that Louisville is the best team in college football? Absolutely not, they managed to beat a Charlotte team that really isn’t good, at all, and despite these gaudy numbers UofL still has a lot to prove and to improve on. My point is this: With the nation watching Louisville out of the corners of their eyes they saw a flash and with few teams at the top of the polls really displaying dominance, eyes have begun to turn toward the Cards.

On September 17th Louisville will take the field against an ACC foe the Cards have yet to defeat in the first two years in the ACC. UofL will be fired up for this game, to say the least, and with a young opposing quarterback Louisville’s aggressive defense will be salivating to confuse and attack the inexperienced Francois. Win this game and spotlights begin to turn towards Louisville.

From beginning the 2015 season 1-4 to having national college football experts start labeling the Cards as ‘dangerous’ and an ‘elite’ team in 2016 isn’t an easy task. What it takes is a perfect storm: hype, history, and taking care of business.

It just so happens Louisville has Lamar Jackson, Bobby Petrino, and a start to the season with defeating Charlotte 70-14.