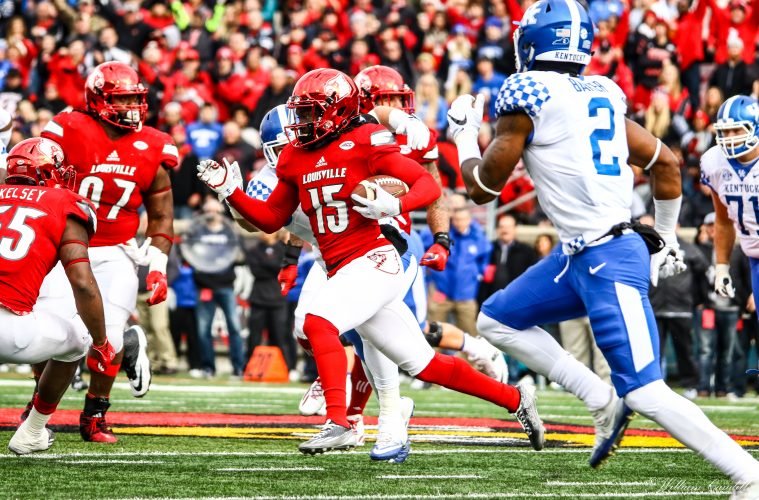 We are getting closer to National Signing Day so recruiting is going to really start picking up over the next 2 months or so. I wanted to give a quick update of some things going on and some things to watch. For more recruiting updates make sure you are following me on Twitter @cpersonTCZ.

** I will reiterate that the staff is really focused on recruiting the offensive and defensive lines and that can be seen by the recent activity around people like Jordon Scott, Kadeem Telfort, Ronald Rudd, Chauncey Rivers, Guy Thomas, Toryque Bateman, Aaron Odom etc. So, don’t worry, reinforcements are on their way.

** 3* JUCO OL Ronald Rudd had an official visit to Louisville this past weekend as well as an in-home visit last night with Coach Klenakis. It sounds like Rudd, a UCLA commit, really enjoyed his visit this past weekend and I don’t think Coach K would have made the trip if he felt Louisville didn’t have a shot to flip him. I am keeping my eye on this one very closely. Rudd will enroll early so the timeframe is probably fairly short.

** Speaking of keeping an eye on, 4* safety target CJ Avery will announce where he will attend college on Wednesday, December 14th. For a while I thought it would be almost impossible to pull Avery out of Mississippi but with the amount of work the Louisville staff has put in to recruit him as well as the good things I keep hearing, I think Louisville has a very realistic possibility. Like Rudd, Avery will enroll early. We will be watching next Wednesday, for sure!

** There was talk about 4* and #1 JUCO WR Brandon Martin as well as 3* WR Leroy Henley for some time and while both are incredibly talented prospects, I just don’t think there is going to be room in this class for them.

** Regarding running backs, it appears it may be AJ Davis or nobody with Colin Wilson already in the fold. Davis is an absolute game-changer so I think if they are able to take him they will, although Louisville will have some fierce competition.

** Louisville gave a preferred walk-on offer to Jeffersonville, IN’s Dayna Overton today. Overton has visited Louisville several times and loves the school. While he is not quite ready to finalize a decision, I think Louisville is in a great spot to get him considering the mutual level of interest.

** DT Ben Hutch was a huge get for Louisville, both literally and figuratively. The Cards needed someone to help try and replace a dominant departing senior, DeAngelo Brown. While there was mention of him possibly playing offensive line, Hutch was recruited for and is expected to play defense. According to sources familiar, Hutch has incredible upside and could be looked at to contribute as a freshman.

** I tweeted earlier today about the Willie Taggart hire at Oregon possibly impacting the Louisville recruiting class. In talking to a source close to the situation, it was said that Jabreel Stephens had/has a very close relationship with Coach Taggart while he was at USF but Stephens really wanted to go out of state. Now that Taggart is at Oregon it will be interesting to see if he targets or is able to flip Stephens. I will keep you updated as we learn more information.

** Nothing major on the Brian Edwards front. I still feel Louisville is in a great position for the 4* DB from Florida. Last night Louisville coaches had an in-home visit with Edwards which focused mainly around answering his mom’s questions. It sounds like the visit went really well and both he and his mom are excited for their official to Louisville January 14th.

** Louisville lost a commitment Tuesday night in OT Gerrik Vollmer. I thought that Vollmer had quite the upside and looked great on film, but if I had to guess I would say the staff is going for offensive lineman who are instant impact type guys. I didn’t like to see him go but unfortunately that is recruiting.