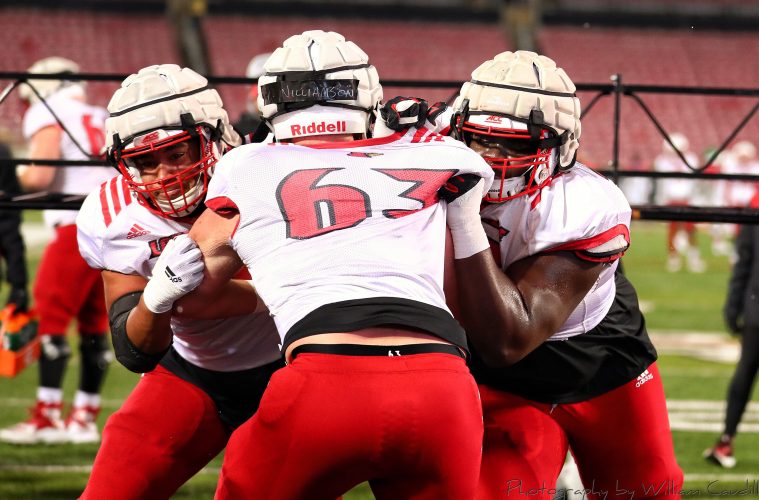 It hasn’t been a normal spring practice for University of Louisville head football coach Scott Satterfield.

Hired on Dec. 4, Satterfield had to assemble a staff, sign a recruiting class during the early signing period, and move his family from a place he called home for over 25 years.

“It’s definitely been a whirlwind,” Satterfield said following his first spring practice with the Cardinals. “But, it’s been great. I’m extremely thrilled to be here and coach this football team. The guys came to practice every day and worked hard, bought into what we were doing, and continued to get better.”

While spring practice at Louisville typically wouldn’t begin until mid-March, the Cardinals concluded their 15th practice of the spring during a cold night at Cardinal Stadium .

The Cardinals put in a two-hour final practice of the spring in the first open practice to the fans during the Satterfield era.

“We got a lot accomplished,” Satterfield said. “I think where the guys have come from here from the first practice to this 15th practice has come a long way.

“It’s been a joy to coach these guys over the last month. I think we obviously got a lot better. We still have a long way to go, but where we have come from I am really proud of the guys. And tonight, it was a practice for us but it was an opportunity for people to come out and see the team.”

After a 2-10 season, the Cardinals are a work-in-progress, but the players have a new mentality, especially on the defensive side of the football, which was a major disappointment a year ago.

“The biggest improvement for us is attitude and effort,” linebacker C.J. Avery said. “We are just focusing on getting to the football with violent intentions, and not worry about making mistakes.”

With a new attitude and energy, the first-year head coach stated that the coaches got a lot out of spring ball in a short period of time.

“It’s a lot of great film to coach off of,” Satterfield said. “We played a lot of guys in places we normally wouldn’t tonight because we’re just trying to look at certain guys in scenarios to see how they are going to react and then we’ll coach through that.

“But overall, I am just very pleased at how the spring went.”

Spring break begins next Monday for the players, but many of the players started their break as soon as the final whistle sounded. After returning from their time off, the Cardinals will hit the weight room, which received a major facelift on Friday, hard between now and the end of the semester.

“These guys have pushed hard over the last couple of months,” he said. “When they get back for us we’re going to be in the wright room really training over the next seven weeks and when I say training, a lot of different things are involved with that – lifting of the weights, running and agility work. And we’re still going to be involved with our guys in that period because we have a lot of teaching to do.

“The great thing is these guys their attitudes have been awesome in coming in and wanting to learn.”

Satterfield noted how happy he was with the way the defense played with the defense and how the guys adjusted and started flying around in the last few weeks. On offense, junior quarterback Jawon Pass thought the offense showed improvements, starting with himself.

“Overall, we had a good spring,” Pass said. “I thought everyone got better. Personally, I felt I improved and the coaching staff got the best out of me this spring.”

With only 15 practices allowed, it’s difficult for Satterfield to install the entire offense, and he stated that he kept it pretty simple.”

“Really, we just got the meat and potatoes of the offense in,” Satterfield said. “Just the fundamental stuff that we want to do, but there are so many other things that we want to do other than what we showed tonight. But you have to build on it. You just can’t put it all in right now.”

The Cardinals will return to the practice field on Aug. 4 when camp begins to kick off the 2019 season.