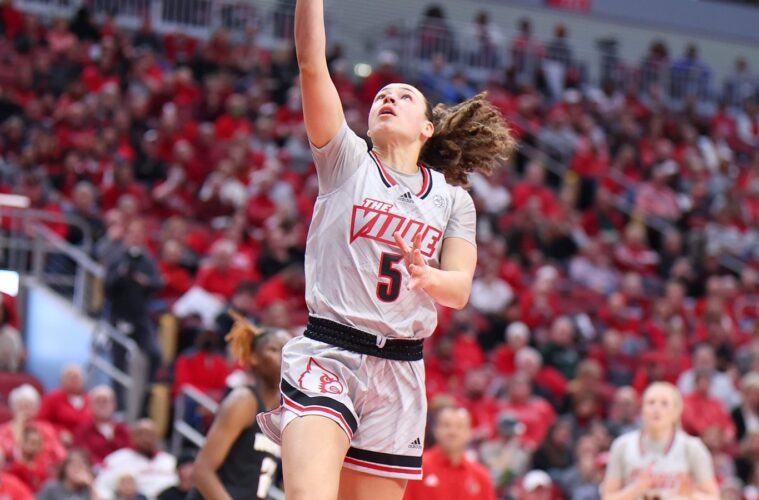 Louisville Falls To NC State In A Winnable Fight, 63-51

Louisville was off to an atrocious start through the first quarter. Prior to Chrislyn Carr hitting back-to-back three-pointers, the Cards were shooting just 11%. It didn’t help that NC State missed hardly anything. Hailey Van Lith didn’t see her first basket go in until halfway through the second quarter. Prior to that, she was 0-4 with 2 turnovers. Louisville finally started to see a small spark when Morgan Jones hit back-to-back baskets and cut the NC State lead to just 3 with 4:25 left to play in the second quarter. With less than one minute to play, Mykasa Robinson showed her true grit with a steal and an easy lay-up to give Louisville the lead. She would make a free-throw before the end of the quarter to push the Cards lead to 33-31 going into the halftime break.

Louisville lost their narrow lead in the third quarter and it kind of felt downhill from there. The Cards were outscored by NCState 32-18 in the second half and went 1-16 in the fourth quarter. The worst part was that they weren’t getting bad looks, they just couldn’t get a shot to fall. Missed layups were an obvious issue as the Cards were 9-20, but turnovers were less of an issue today than they were in the past. Louisville tallied 4 first half turnovers and 8 second half turnovers for a total of 12, which is a significant cut back on their average of about 16 per game.

Chrislyn Carr and Morgan Jones led the team in scoring today with 16 and 13 points, respectively. Hailey Van Lith was the only other player in double-digits with 11 points. Olivia Cochran led the team in rebounds with 11 and as a team, the Cards had only 6 assists for the game.

Louisville will travel to Winston-Salem this Thursday, January 26th, to play Wake Forest in a 6pm tip-off. You can catch that game on 93.9 The Ville as well as on ACCN.