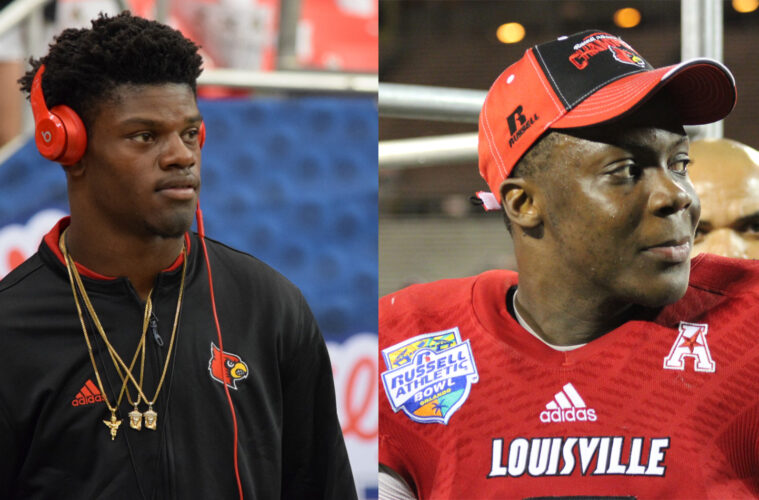 Lamar Jackson & Teddy Bridgewater: An Examination of the Freshman Year

Teddy Bridgewater & Lamar Jackson are both from the Miami area who came to Louisville as Quarterbacks, threw an Interception on their first collegiate pass and finished their 1st regular season as a Cardinal at 7-5. They also both beat Kentucky coming off the bench and excited the fanbase with their flair.

But they are very much different.  Lamar is more brash than Teddy and Jackson’s running ability is vastly better than Bridgewater’s. On the other hand Teddy came from Miami Northwestern with a much more polished throwing ability having thrown to Amari Cooper, Eli Rogers, and Corvin Lamb.  Lamar Jackson didn’t have that type of receiver out of high school.

Additionally once Teddy won the job over Will Stein he never gave it back.  In 2015 Lamar Jackson was in and out of favor due to style, play, and injury throughout the season giving way to Kyle Bolin for games and Reggie Bonnafon in certain situations.

Teddy Bridgewater will always be in the hearts of Louisville fans as one of the best Quarterbacks and players in school history and he’s proving his worth now in the NFL.  The difference between Teddy Bridgewater from his freshman year to his sophomore year was VAST.  Teddy took the Spring and the Summer of 2012 and really took MAJOR strides towards being the player that we know today.  Can Lamar Jackson make those same strides?  That remains to be seen, but for now let’s compare how Lamar Jackson performed statistically to Teddy Bridgewater as a freshman?

Teddy completed a higher % of passes and had a higher QB Rating as a freshman, but Lamar’s Yards Per Attempt just edged out Bridgewater. Clearly Teddy was the better passer as a freshman.

As we starting looking at the differences in the two players this is where Lamar stands out.  Teddy certainly had the edge as a passer, but Lamar’s running dimension really is much more dynamic than Teddy’s.

It’s probably surprising to a lot of folks that Lamar Jackson gained more Yards of Total Offense despite playing 23 fewer plays as a freshman.  Lamar will build on this during the bowl game, but it really is Jackson’s ability to run that made him more dangerous as a freshman.  The question now is can Lamar make the same leap forward from his freshman to sophomore year that Bridgewater did and maintain his ability to run?  If he can then Lamar Jackson has the opportunity to take a similar place on the mantle of Louisville Football as Teddy Bridgewater….but he must get MUCH better from Year 1 to Year 2.

Really quick before we get to the situational passing chart some notable things to point out:

-On 1st Down Teddy hit a higher % but Lamar’s Rating and Yard Per Attempt is much higher and Lamar converted more 1st downs, Lamar was a better passing QB on 1st down than Bridgewater as a freshman.

-On 2nd Down Teddy has the edge as a passer by a pretty wide margin.

– Pick your QB on 3rd down.  Teddy threw way too many INTs on 3rd down as a freshman, they had a similar QBR but Lamar converted well above Teddy on 3rd down.  You can see below the breakdown of different variations of 3rd down as well.  Both players were very good on 3rd & Short and 3rd & Medium with Lamar having an edge, while Teddy’s stats are probably favored in 3rd & Long except for 3 INTs, and in 3rd & Really Long it’s a pick ’em again because of Teddy’s INTs.

Teddy’s numbers aren’t going to really shine in the rushing department.  It’s just not the kind of QB that he was.  But in order to understand the entire picture, we’ve got to show it to you.

Now that we’ve got Passing & Rushing broken out…it’s time to put them together.  The charts below show how Teddy & Lamar compared when either throwing or running in different situations.  It does not account for any handoffs, checks, penalties, etc.  Some quick notes:

-On 1st Down Lamar Jackson is easily your player.

-On 2nd down it’s a split but Teddy has 3 more TDs while Lamar gets more Yards Per Play and converts a higher % to 1st downs.

-3rd down is like splitting hairs between Bridgewater & Lamar as freshman. Lamar was much better at converting 3rd & Really Long.

There will never be another Teddy Bridgewater.  It’s just not going to happen.  But there are a lot of reasons out there to be excited about Lamar Jackson.  Lamar does it in a different way than Teddy but if he can make the same jump as a sophomore in production that Teddy did then Louisville fans and Bobby Petrino really may have something special to look forward to in 2016.

Lamar Jackson needs to spend the Spring under center taking snaps and working on building a rapport with his running backs.  Doing this will only help him in the passing game as we’ve seen his ability with ball skills in the read option and if he can translate that into play-action…..Sky is the limit.