Three years ago and the first year of the Charlie Strong era the Louisville Starting Wide Receivers sounded like this: Josh Chichester, Doug Beaumont, and Josh Bellamy.

To the start the 2010 season the trio had a combined for a total of 4 touchdowns and when they ended the season, they combined for 9. When Louisville Junior WR Devante Parker went down with a right shoulder injury Saturday against Temple, the Louisville native already had 6 touchdowns for 2013.

Want an even crazier stat? During Parker’s on-going career (2.5 years so far) at Louisville, he’s amassed more touchdowns than the entire Louisville 2010 Wide Receiver core did.

My goodness……the times have changed haven’t they?

Maybe there are a few Card fans that still have doubts about Charlie Strong at Louisville?

Maybe those fans will never be happy?

Maybe those fans still look at the team that lost to Syracuse and Connecticut last year to make their case?

Sometimes fans need other indicators of success than wins or losses. I’m here to provide those for you. Let’s take a look at the latest example: Star Louisville Wide Receiver DeVante Parker goes down with an injury Saturday which may or may not cause “Spiderman” to miss the game the following week…….a game that happens to be the biggest of season for the Cardinals.

Widespread panic right? Maybe for the 2010 Cardinals. This crew doesn’t miss a beat.

“We have enough receivers where we can put guys in place and they gotta’ go play,” Head Coach Charlie Strong explained. “What has happened is that we’re so balanced on offense and we’re able to run the football.”

There was a time that an injury like this would doom Louisville. No more.

There was a time that this injury could worry not just the fans but also the players. Now, the Louisville Cardinals are more amped than ever.

The days  of worrying about one player going down are simply over.

“All of those guys are playing well at Wide Receiver,” Strong said. “Whether it’s the slot guy in [Damian] Copeland or you look at Eli Rogers whose made a big catch there. And then Robert Clark, and the TE Gerald Christian. You’ll miss him [Devante Parker]. He’s a really outstanding player. But, it’s time for other guys to step up.”

Charlie Strong’s mantra of ‘next guy up’ shows exactly how good things are going for the University of Louisville Football program now.

Take any three of the Louisville Wide Receiver starters from the 2010 Cardinals and it would mean dire consequences. It’s not the same with this Cardinal team. The recruiting, the depth, the overall upward trajectory of the program are a few reasons why.

Devante Parker is an incredible athlete and a wide receiver poised to destroy the Louisville Football record books is  a big loss, but no longer a killer.

The biggest difference between the Elite Programs, and the rest of College Football is quite possibly the depth that they can provide. Nick Saban can lose a starting running back, but guess what? The guy directly behind him is a 5-star highly-touted recruit that’s been chomping at the bit to get a spot on the field. While Louisville may not be on the same level talent-wise as the ‘Fighting Sabans’, this is one instance where they are lots alike. 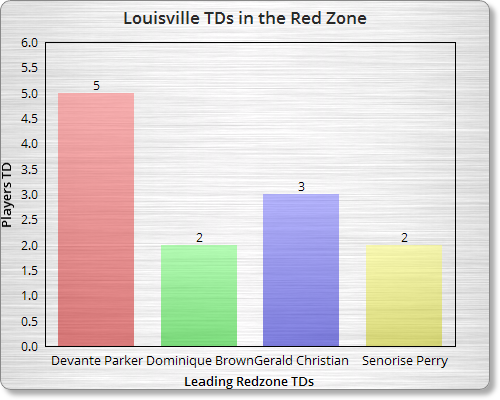 If Parker can’t go Thursday against the Scarlet Knights, he’ll clearly be missed in the redzone. Throwing a ‘jump ball’ to Parker when anywhere close to the goaline is the Cardinals ‘go to play’. As indicated by the chart above, Parker’s has owned defenders inside the 20. Even this chart is a bit misleading, 2 of Gerald Christian’s redzone TDs were against FCS opponent Eastern Kentucky. This chart also doesn’t show how Parker has been targeted 10 times in the redzone; which more than doubles any amount of targets the other receivers have seen.

It became apparent how much Parker was needed after his departure against Temple last weekend. Three times the Cardinals reached the redzone, three times they settled for three. Two of those times it was a direct result of failing the ‘jump ball’ attempt to other receivers. It’s quite clear that if Parker can’t go Thursday – or even if he’s not full strength – the Cardinals will have to find other ways to put the ball in the in-zone; I’m looking at you Dominique Brown.