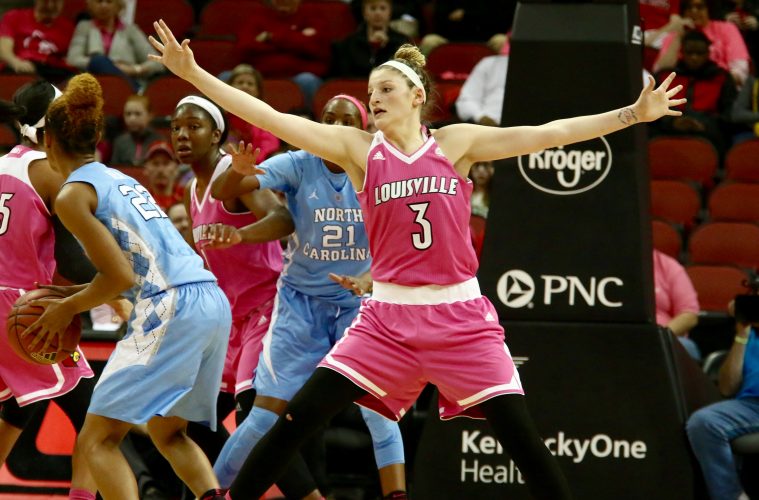 The No. 14 Louisville women’s basketball team plays its final regular season home game on Thursday, when it faces Virginia on ‘Senior Night’ in the KFC Yum! Center at 7 p.m.

Fans are encouraged to be in their seats for the start of ceremony at 6:40 p.m. ET, when the Cardinals celebrate the careers of Briahanna Jackson, Taylor Johnson, and Cortnee Walton.

Louisville (23-6, 10-4 ACC) is coming off its third-consecutive victory, logging an 87-57 win against North Carolina on Sunday. The Cardinals held a 42-16 advantage in paint points and outrebounded the Tar Heels 52-32. Louisville’s offense exploded in the fourth quarter, with a season-best 33 points.

Asia Durr played 28 minutes and scored 28 points on 10-of-16 shooting, including 4 of 8 from 3-point range. Myisha Hines-Allen registered 19 points and 12 rebounds for her 12th double-double of the season, and Mariya Moore contributed 13 points, six rebounds, six assists, and three steals.

With her last outing, Durr improved her season scoring average to a team-leading 18.3 points per game. She has connected on 89 3-pointers, sixth best nationally, and boasts 49 assists and 37 steals. Moore is second in scoring at 13.0 points, while leading the program with 132 assists. Hines-Allen rounds out the top three scorers with 12.9 points to go with a team-high 9.0 rebounds.

Virginia (18-9, 7-7) has won three-consecutive games, including a victory at home against Florida State. The Cavaliers last defeated Virginia Tech 63-55 on Sunday, earning a sweep of the Hokies. Virginia, which held a 34-18 advantage in the paint, outscored Virginia Tech 19-8 in the opening period. The Cavaliers also converted 14 offensive rebounds into 13 second-chance points and held the Hokies to just 32.8 percent shooting.

Breyana Mason scored a team-high 13 points in the win, while J’Kyra Brown and Dominique Toussaint each added 11 points. Jocelyn Willoughby contributed 10 points, five rebounds, and two steals. Sidney Cook finished with 15 points and 11 rebounds for Virginia Tech in the loss.

This season, Lauren Moses is pacing the Cavaliers in scoring at 10.2 points. Toussaint is the only other player averaging double figures (10.0). Willoughby boasts team highs of 6.2 rebounds and 46 steals, and Mason has a team-leading 78 assists.