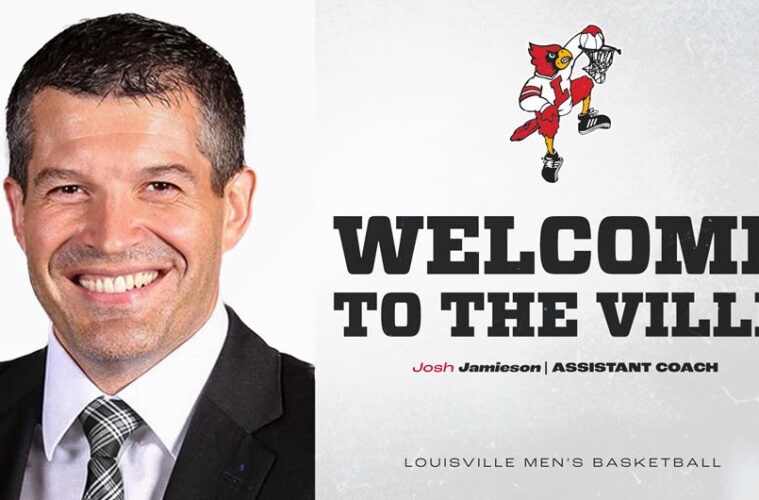 “I’m so happy and excited that Josh is joining our staff,” said Payne.  “His experience in helping run a program and his basketball knowledge will be invaluable to me and our entire staff.  Josh’s work ethic and passion for the job and young people will be essential to building a championship culture here at UofL. He truly is of the secret gems of college basketball who now gets to come out of the shadows.”

Jamieson served as Executive Director for Oregon men’s basketball last season and was Director of Operations for the previous 14 years with the Ducks.  Over his last 15 years at Oregon, the Ducks averaged nearly 23 victories per season and won 20 games each of the last 12 years, including a school record 33 games in the 2016-17 season when Oregon reached the NCAA Final Four for the first time in 78 years.  Oregon had just eleven 20-win seasons in its history prior to the current run.

Oregon participated in postseason tournaments on 11 occasions in Jamieson’s last 15 years with the program, including reaching seven of the last nine NCAA Tournaments.  The Ducks won four of the last seven Pac-12 regular season titles and advanced to the NCAA Sweet Sixteen on five occasions in that stretch.  Payne was an assistant coach at Oregon during Jamieson’s first two years as Director of Operations with the Ducks.

“I am both extremely excited and deeply honored to be joining Coach Payne’s staff at Louisville,” said Jamieson.  “I have been blessed to work with Coach Payne and I share his unbreakable commitment to developing young men in a way that allows them to reach their true potential. The opportunity to join the Louisville family is very special to me and my family. “

Jamieson’s responsibilities over the last 15 years at Oregon have included scheduling, coordinating the
team’s travel, budgeting, academic support and equipment oversight. He also served as the Director of Oregon Basketball Camps, while managing the program’s “Always Us” alumni team entry into the annual The Basketball Tournament.

“Josh finds a way to build relationships with players and motivates them to be the best they can be,” said Dillon Brooks, a guard/forward with the NBA Memphis Grizzlies who earned 2017 Pac-12 Player of the Year honors at Oregon.  “He didn’t personally recruit me to come to Oregon, but we just automatically connected and he’s been like an older brother to me.  I feel like he’s one of the best at mentoring kids to be the best they can be in basketball, school and within their lives.  He has a knack of really motivating guys.”

“Josh is one of the closest people in my life, right outside of my parents,” said Payton Pritchard, a guard for the NBA Boston Celtics and the 2020 Pac-12 Player of the Year at Oregon.  “I wouldn’t be in the position I am today without him.  Having him as a person caring for me off the court as much as on the court to is what I think really made me excel in college.  He’s one of the biggest grinders dedicated to helping others that I’ve ever seen.  He’s definitely one of the hardest workers and caring people in my life.  We talk probably every day.”

“I’ve never met anyone who works as hard as Josh does,” said Luke Ridnour, a guard who played 12 seasons in the NBA after being named the 2003 Pac-10 Player of the Year at Oregon.  “His passion and love for people and basketball will help make Louisville great. Personally, Josh has helped me along my journey in college and through the NBA and is someone who I lean on in life. Louisville got a great one.”

Prior to his most recent stint with the Ducks, Jamieson operated for three seasons as a graduate manager with the Ducks from 2000-03 when Oregon made back-to-back NCAA tournament appearances, advanced to the Elite Eight in 2002 and won both regular season and Pac-10 tournament titles.

For 10 years, Jamieson directed the FOCUS Basketball Camp, which was staged each summer in Medford, Ore.

Jamieson graduated from Southern Oregon in 2000 and earned his Master’s of Business Administration degree from the University of Oregon in 2003.

A native of Medford, Ore., Josh is married to his wife Amy.