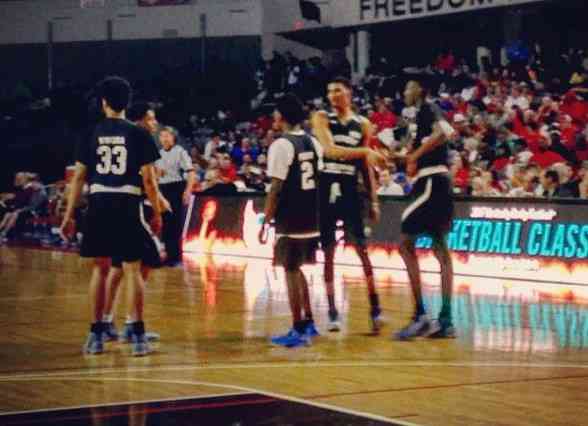 A game without defense… this is what nightmares are made of for Coach Pitino and his future Louisville prospects.  Let me paint the picture for you… 10 minute quarters, no shot clock, 6 fouls per player, no zone defense, no press and no official replay.  Yes, it seems to still be the year 2017.

Louisville guys, Darius Perry, Lance Thomas, Jordan Nwora and Malik Williams all started for team Thunder.  They played about 11 minutes in the first half and 11 in the second. Despite the typical ‘warm-up’ period for each team before tip-off, it seemed that the future Cards took a little bit more time to get loose on the court and find a rhythm in their game in their first appearance in front of the home crowd.  You don’t learn TOO much about the individuals’ game in these all-star games but more about the guys, personally.  They get a chance to meet the Louisville media and learn what it’s like with 12 cameras in their face at once. A new experience for high school players to adjust to.  And I thought the guys handled it well.  They answered the typical ‘how do you feel in this moment/are you excited about coming to the ‘Ville’ question we had for them and with a smile on their face.  The two most vocal players were Malik and Lance, they might have been the biggest, too.

You can see those interviews here… https://thecrunchzone.com/video-kdf-classic-post-game-with-future-cards/

But for those who want the numbers, here you go.

At half, the finals of the 3-point shooting and dunk contest were held.  Darius Perry participated in the dunk contest with the assist from DONOVAN MITCHELL. Forgive the PA announcer’s mistake of calling him ‘Devante’ Mitchell. );  Dunks were not going in on this night. Tired legs, I do believe… none the less.

Take what you will from these numbers but what I took away was an excited class of future Cards to get on campus and get to work to bring another national title to the University of Louisville.  And I think Donovan Mitchell looks forward to playing alongside this class of Cards. (;