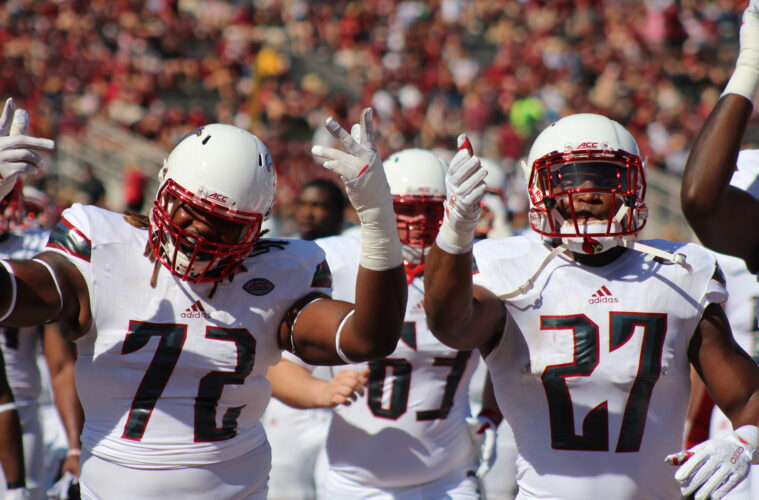 On Saturday the Cards have a HUGE opportunity by hosting the #2 team in the country on its home field.  UofL is capable of getting the Win, but they will have to play more effectively than they did in Weeks 1 & 2 in order to do so.

In big games like this one team typically tries to set the tone early and establish dominance.  Sometimes this can happen after the play, between the whistles… or even before kickoff.  Football is a mental game and many believe that Georgia won the 2014 Belk Bowl when the Cards came out of the tunnel and punked the Cards before the coin flip.  The officials let it happen (which is another issue) but Louisville can’t allow that activity to happen on its home field….. or any field.

Bobby Petrino likes to score on the opening possession.  That will be hugely important if the Cards can win the 1st possession offensively & defensively.  Louisville has to handle it’s business from the moment it gets off the bus.  Every part of the game will be important and we all know that Florida State won’t quit until the final minute.

Don’t Get Caught Up in the Hype

It’s just football.  The Cardinal Football team can not worry about the national implications, red helmets, College Game Day, or even that they are playing Florida State.  The Cards just need to play UofL Football.  If they focus on the task at hand and prepare during the week then we’ll have a ball game.  If either team gets worked up over everything else going on outside the lines it’s a huge advantage for the other team.

Tighten Up On Defense

Louisville’s Defense is an elite unit.  But this will be the 1st opportunity to really show it.  The Cardinal #1 D had a few break downs vs. Charlotte and played WAY TOO MANY PLAYS vs. Syracuse.  Florida State isn’t going to go at the Orange’s pace & the Louisville Offense isn’t going to score as easily as it did last Friday.  So the Cardinal Defense should be able to catch its breath, line up, get the play and focus on stopping the Noles.

Jimbo Fisher is a MASTER on offense and we all know about what Dalvin Cook has done to the Cards the last two years.  Louisville MUST make the plays they are in position to make…. a problem that has led to their demise the last two seasons.

Currently the Cards are -3 on the season and Florida State is +6.  That is a large disparity in turnover margin just 2 weeks in.  Florida State gets turnovers and the Cards have carried over a nasty habit from 2015 that was a big reason for its 5 losses last year.  If UofL wants to achieve its goals on the gridiron in 2016 they MUST STOP TURNING THE BALL OVER.  So far none of the turnovers have hurt Louisville but it’s just a matter of time……especially since Florida State.

Building off of the turnover category Louisville has had some dropped passes some missed assignments, some blown coverages and the Cards have still won convincingly in both of its games.  The margin for error is now gone.  Louisville can’t beat Florida State on Saturday with 10 dropped passes like it had vs. Syracuse or the fumbles that occurred after long catches.  UofL’s secondary has been caught looking in the backfield a few times this season and there have been a handful of missed tackles.  THAT. MUST. STOP.

Louisville has led the 2014 & 2015 match-ups at the half.  We may never know how exactly UofL managed to lose the 2014 game but last season it was a handful series of plays in the 3rd quarter where the wheels just fell off.  Louisville can not get a lead at halftime and suffer the same demise that it has the past two seasons and what FSU did to Ole Miss in Week 1.  Florida State is extremely talented and they will NOT quit.  Louisville needs to finish the game if they have the opportunity to do so.