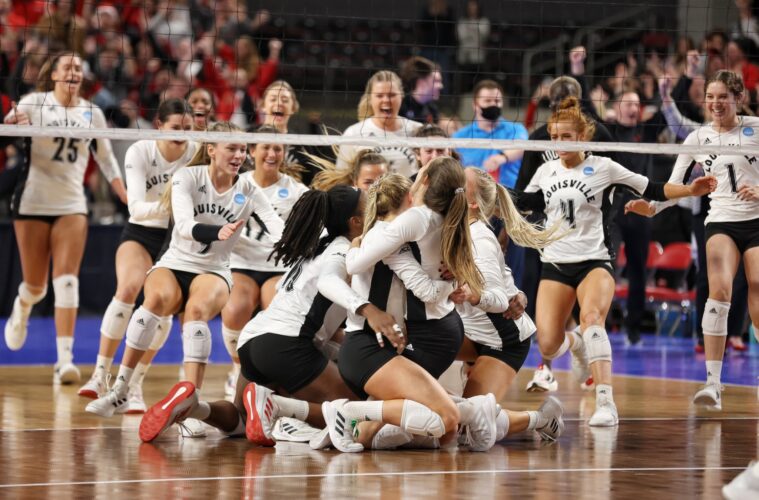 Claire Chaussee racked up 18 kills and hit .348 to lead No. 1 University of Louisville volleyball past No. 8 seeded Georgia Tech 3-1 in the NCAA Regional Final on Saturday night in front of 5,917 fans at Freedom Hall.

“I’m just insanely proud of this team,” Louisville head coach Dani Busboom Kelly said of her squad’s performance. “People don’t realize how hard it is to make it to the Final Four, especially when you have all the pressure and you’re supposed to make it there, that’s even tougher in my opinion.”

Louisville remains undefeated on the season, moving to 32-0 and advancing to the first Final Four in program history. As a team, the Cardinals had 55 kills and hit .217 with four aces, 65 digs and 17 blocks. Rounding out the Cards top hitters, Anna DeBeer was second on the team with 14 kills, adding a team-high 21 digs with Anna Stevenson recording 13 kills on 23 swings to hit a team-high .391 while leading the team with three solo blocks. Tori Dilfer directed the Cardinals’ offense, tallying 49 assists with a team-leading two aces. Elena Scott was second on the team with 19 digs.

Georgia Tech got off to a quick start, taking a 4-1 lead early. The Cards answered quickly, sparked by a big swing from Aiko Jones, ripping off six straight points to jump out in front 7-4. The Yellow Jackets fought to get back within one at 8-7, but the Cardinals continued to play aggressive volleyball, scoring another four consecutive points to go up 12-7 and force Georgia Tech to call its first timeout of the set. The teams traded points back-and-forth following the timeout with neither team able to seize the momentum until Amaya Tillman and Anna DeBeer combined for a big block to put Louisville up 17-10 and force the Yellow Jackets to use their second and final timeout of the set. The Georgia Tech timeout paid off as the Yellow Jackets took points in bunches to close the Cardinal lead to four at 19-15. From there, UofL went on a 4-0 run, highlighted by a cross-court kill from Claire Chaussee to win a long volley, to go up 23-15 before finally closing out the first set 25-18.

Louisville carried its momentum into the second set, using a three-point run to take an early 4-1 lead. The set went back-and-forth from there with the Yellow Jackets scratching away at the Cardinal lead, getting all the way back within one at 6-5. UofL turned in another 3-0 run to extend its lead to 9-5 but Georgia Tech battled again to cut the lead back to one at 10-9. The Cards continued to control the set, scoring five of the next seven points to push their lead to four at 15-11 heading into the media timeout. The teams continued to trade points following the break with the Cardinals holding on to their lead, up 20-15 late in the action. Georgia Tech started a late rally, scoring three straight points to get back withing two at 20-18 as Louisville called its first timeout of the set. The Yellow Jackets continued their run out of the timeout, scoring another three points to take their first lead of the set 21-20 as the Cardinals used their final timeout. UofL took the first point after the break to even the score 21-21, but Georgia Tech would put together a final run of four-straight points to take the second set 25-21 and even the match 1-1.

The Yellow Jackets jumped out in front early, using a 3-0 run to take a 4-1 lead. Louisville stayed strong and battled, stringing together six straight points behind Elena Scott’s service to take a 7-4 lead. Georgia Tech took four of the next five points to even the score 8-8 before the Cardinals pushed their lead back to two at 11-9. From there, UofL put together four straight points to extend its lead to 15-10 entering the media timeout. The teams traded points following the break until the Yellow Jackets turned in a 3-0 scoring run to cut into Louisville’s lead as the Cards called their first timeout, up 17-14. A kill from Anna DeBeer ended the Georgia Tech run after the timeout, but three out of the next four points for the Yellow Jackets put them back within two at 19-17. UofL took four of the next six points as the Cardinals continued to control the set, forcing Georgia Tech to use its first timeout of the set down 23-19 late. The Yellow Jackets came out of the timeout on the attack, scoring back-to-back points to get within two at 23-21 as Louisville called its final timeout of the set. Claire Chaussee landed a big kill out of the break and the Cards took the final two points they needed to win the set 25-21 and take a 2-1 advantage.

Georgia Tech once again got off to a quick start, taking an early 6-2 lead. Louisville went not stay down long, railing off six unanswered points, led by Anna Stevenson with two kills and a block, to take an 8-6 lead. The teams traded points from there as Louisville maintained its lead 12-9. The tightly contested set continued with neither team able to take an advantage, but a sharp kill from Anna DeBeer sent UofL into the media timeout with a 15-12 lead. A quick kill from Anna Stevenson out of the timeout pushed the Cards’ lead to four at 16-12 and forced Georgia Tech to call its first timeout of the set. The Cardinals continued their aggressive attack, going to Claire Chaussee for two straight kills after the break to extend their four-point scoring run and take an 18-12 lead as they forced the Yellow Jackets to call their second and final timeout of the set. Georgia Tech took advantage of the timeout, scoring four of the first five points out of the break to get within three at 19-16 as Louisville called its first timeout of the set. UofL took three of the first four points after the timeout to push its lead to 22-17 before eventually taking the set 25-20.