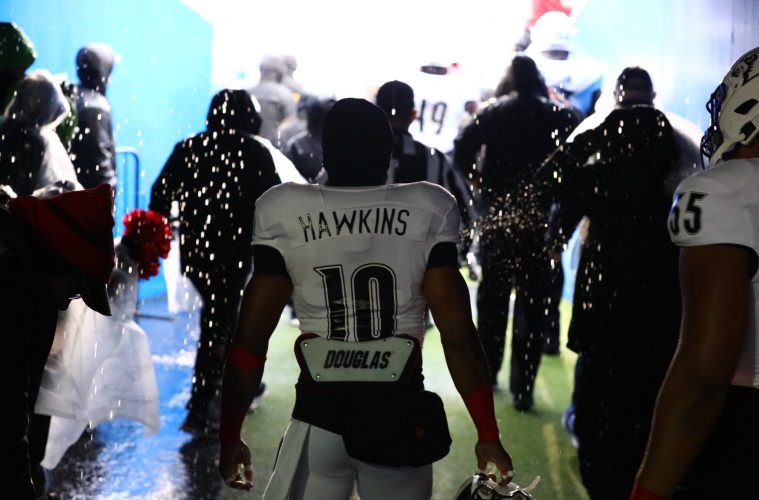 Bowl eligibility was not a question for either team as the 7-4 Cardinals traveled to Lexington to face the 6-5 Wildcats. In fact, very little was in question. Louisville was bringing a high-powered offense to Kroger Field to face a stiff Kentucky defense. Meanwhile, the Louisville defense left much to be desired against Lynn Bowden Jr. and a nearly unstoppable blue onslaught. The only real unknown was the degree to which each element would be manifested.

The answer came in dominating, if not embarrassing fashion for the Cardinals as the Wildcats ran buck wild to a 45-13 victory and the Governor’s Cup.

A miserably wet and cold day at Kroger Field was well anticipated but the hardy BBN made a good showing along with a large contingent from Card Nation. Those clad in red were given reason for joy early on as the Cards marched down the field and capped the drive with a 33 yard touchdown pass to Tutu Atwell. In a case of foreshadowing the PAT from Chalifoux sailed wide to leave the Cards with six on the scoreboard.

Still, the answer to the original question seemed to be that the hard-nosed Louisville offense had come to play. Turnabout being fairplay it quickly became clear that the Cardinals defense was not ready for action. The Cats marched down on consecutive drives and scored two of their six rushing touchdowns from short yardage in the red zone.

Meanwhile the Cardinals offense stagnated. Two punts and an interception were joined by a turnover on downs after a Mason King punt fake to Troutman failed to gain the necessary yardage. At the time it felt as if desperation was creeping out of the Scott Satterfield playbook and things looked increasingly grim for Louisville.

The Louisville defense showed signs of life, however, and held the Cats to a field goal, a punt, and a turnover on downs as the half drew to a close. The turnover came off of a high questionable decision from Mark Stoops. With under a minute to play UK went for it on fourth and short and the Cardinals defense stood fast. Scott Satterfield had seemingly been content to go to the locker room and reset with his first half timeouts intact. But the turnover presented an opportunity and Javian Hawkins struck like a hammer on a 56 yard TD run (part of 146 total) to breathe life back into Louisville’s chances.

But that, as they say, was that. Despite numerous instances of halftime adjustments breathing life into the Cardinals it was not to be the case on this damp day. The Cats came streaking out of the locker room with 28 unanswered points on four rushing touchdowns to turn hope into shame as the scoreboard read 45-13 at the final whistle.

Three of those second half rushing TDs were courtesy of Lynn Bowden Jr. who had four on the day. The Louisville Cardinals rushed for 209 yards. Lynn Bowden Jr. rushed for 284. The stats don’t get any better from there. All told, the Cats would put 517 yards in the rushing column by the end of the game. The Cardinals knew it was coming and still the UK run attack slipped through gaps like greased lightning. It will definitely be an exercise to go back and count all Cardinals’ missed tackles.

To add insult to injury, the Cats had just four yards passing on two attempts. The second attempt was a flea flicker midway through the fourth quarter with UK up 25 that sailed through the receiver’s hands. Sadly, the pass attempt seemed like a small mercy against a defense that had failed to stop the run by any means. The flea flicker rankled many on the Louisville sideline and in the stands but Mark Stoops has demonstrated anything but a recalcitrance to play the rivalry.

Whatever hope did remain was dashed with the exit of Micale Cunningham. Reports came out that a stomach illness sidelined the lead QB and so Evan Conley slid in under center to finish things out. It did not go well, suffice to say. The Wildcats defense had six sacks and held the Cards to 4.5 yards per play while the UK offense was running rampant. Chunk plays led the way as Big Blue busted out 13 rushes for 10 yards or more including a 70 yarder that established UK’s longest run of the season. In the end the Cats were able to do their business in just 42 plays compared to 70 for the Cardinals.

Both teams now sit at 7-5 and await bowl bids. For the Cardinals the sting of defeat is lessened somewhat by the quick turnaround under Scott Satterfield and staff. For Card Nation, no doubt, that comes as little solace in the short term. The defensive weakness was well known going into the 2019 Governor’s Cup but to see the deficiencies made so plainly obvious against the bitterest of in-state rivals certainly takes some of the luster off Satterfield’s first season.

The Cards are bowling. But what had been jubilation is now a muted satisfaction after an absolute manhandling by them Cats.