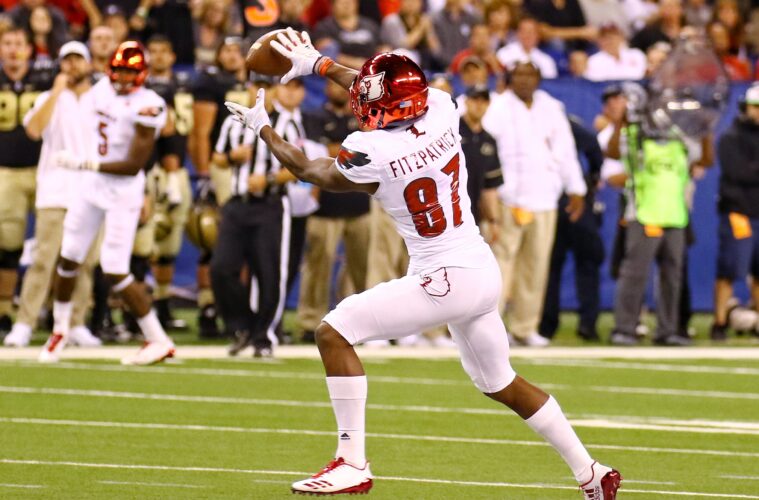 University of Louisville wide receiver Dez Fitzpatrick can recall, when he was six years old, being in the backyard with his father Greg working on routes and learning how to get open in tight coverage.

The attention to detail and hard work paid off for the younger Fitzpatrick in the Cardinals’ first game – a 35-28 win over Purdue on Saturday at Lucas Oil Stadium.

Inserted into a larger role in the second half, Fitzpatrick ignited the offense with four catches for 95 yards, including the go-ahead touchdown with 9:01 left in the fourth quarter to give the Cardinals a 32-28 lead.

“I thought he did a really nice job,” head coach Bobby Petrino said on Monday. “He also did a good job of blocking out there and playing hard. The thing that was good to see was the first catch down the middle. Lamar and Dez both saw the coverage; they knew what was going to happen. It was perfectly thrown and caught.

“On the touchdown pass, they were both exactly on the same page. That’s something that we worked on throughout the week. He had to beat the corner and the safety to get the ball in there, and Dez had to quick-tuck it, which he did.”

Not only was the touchdown reception a big play in the game, but he extended that drive a few plays earlier when he caught a 39-yard pass down the seam on 3rd and 6.

“My dad had me out there running routes when I was young, working on routes and body control,” Fitzpatrick said. “A lot of the credit goes to him for working with me, but setting up defensive backs, you have to control them. You have to have football IQ to do that in a big college game when the play is running.”

While those two receptions were big moments in the game, Fitzpatrick thought the first reception was his hardest catch. Trailing 7-0 in the first quarter, Fitzpatrick caught a 15-yard pass from Heisman Trophy winning quarterback Lamar Jackson that was definitely something that calmed Fitzpatrick’s nerves.

“It was definitely a relief,” Fitzpatrick said. “When the ball was coming, I thought I was not dropping this ball. When the ball came, I just focused really hard. Lamar was rolling to his left; I saw the ball coming, and I got big eyes; and made sure I caught it and got down for the first down.”

Wide receivers coach Lonnie Galloway thought the rookie played well, but still hasn’t reached his entire potential, which is understandable for a receiver playing in his first collegiate game.

“I thought Dez came in and gave us a spark,” Galloway said. “He made four great catches, clutch catches, in big-time moments when we needed him. I tell Dez all the time he needs to show us in practice. He’s been doing that. He needs to clean up some things in his routes, and he should have had three touchdowns in the game.”

Fitzpatrick, a highly touted recruited from Farmington Hills, Mich., sat out last year as a redshirt, which was hard for a player who had expectations to get on the field. However, the transition isn’t easy because of the complexities in the offense and the college game.

Galloway saw a lot of potential in Fitzpatrick last season, but he saw a big change that had nothing to do with route running and catching the ball.

“Knowing what to do is the biggest change I’ve seen in him,” Galloway said. “Coming in as a freshman, there is a lot put upon them. There are a lot of details and technique stuff that changes in the offense that he has gotten better at and knowing what to do.”

Coming out of the spring, Fitzpatrick impressed the coaching staff with a solid set of practices and stood out with a big performance in the spring game, catching nine passes for 176 yards and two scores.

“It went as planned,” Fitzpatrick said. “I said to myself during my redshirt year that I would get bigger and stronger. When I did come out of my redshirt year, I had to prove to my coaches that I could play.”

Fitzpatrick certainly proved he belonged, and will get another chance when the Cardinals travel to North Carolina on Saturday for a noon kickoff versus the Tar Heels.