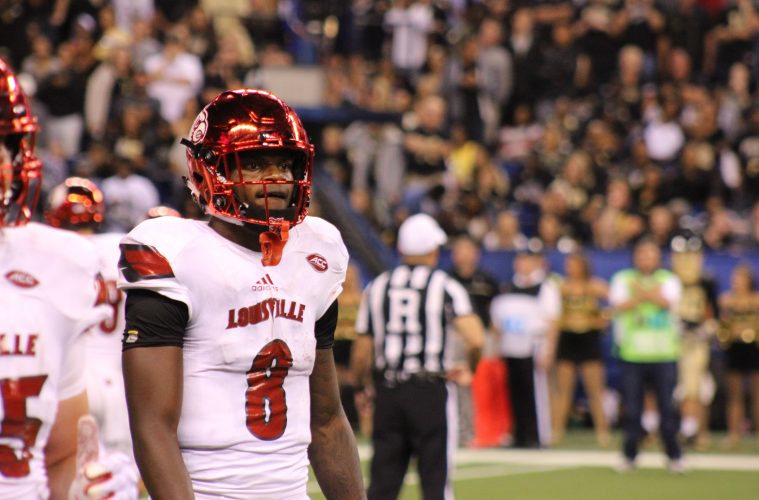 The University of Louisville Athletics Department announces details around Saturday’s retirement of Lamar Jackson’s No. 8 jersey number for Saturday’s Noon game versus Syracuse at Cardinal Stadium.

The former Heisman Trophy winner will be in attendance as the Cardinals retire their second jersey in school history during a halftime ceremony at midfield. The No. 8 will be permanently mounted on the East side of Cardinal Stadium alongside the No. 16 of another great quarterback in Johnny Unitas.

“This is going to be a special day for Louisville Football, and something we have been looking forward to for month,” Vice-President/Director of Athletics Vince Tyra said. “Once the NFL schedule was released, we were able to overlay that scheduling calculus with our own home games –resulting in a bit of serendipity –that we will honor Lamar as we take on Syracuse. Then, being able to surprise him with the news—and have our fans share in that moment was so special. His genuine gratitude was so true to who he is as a person and has truly touched us all “ says Vince Tyra, Vice President/Director of Athletics.

Additional in-game content reflective of Jackson’s on-field play and off-field community impact will be woven throughout the game.

As announced in July, Saturday is also Military Appreciation Day and Louisville looks forward to honoring our service heroes as well.

Louisville painted Jackson’s No. 8 on the field to mark the occasion, with additional celebratory installations to be revealed leading up to Saturday’s game.

Fans can enjoy additional opportunities to celebrate Lamar at The Alley before the game including photos with fan cutouts with some of Lamar Jackson’s most iconic moments in his Louisville career, as well as temporary No. 8 tattoos to mark the occasion.

The first 20,000 fans in the gates will receive a black No.8 rally towel, presented by Planet Fitness, to commemorate the occasion, and all souvenir beverage cups will have a special design available for purchase at the concession stands.

UofL season ticket holders can look forward to an exclusive opportunity to be communicated via email later this week. Additionally, The Ville’ans will work with adidas campus ambassadors for student-specific activations in-game.

Additional gear can be purchased on the day of the game at the Alley Shop and at Cardinal Authentic Merchandise stands inside the stadium.

The game was previously designated as a “Blackout Game” in July to correspond with the team’s uniform selection. However, once the dates worked out to retire Jackson’s No. 8, fans are encouraged to wear anything to celebrate him and our military heroes for this special occasion.