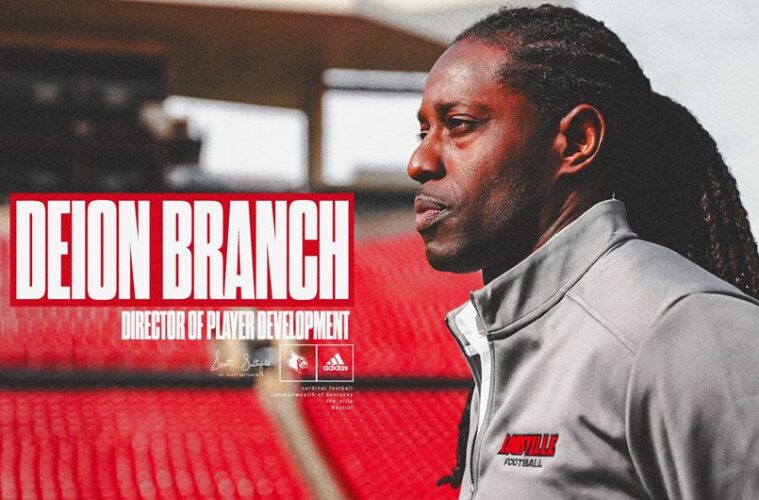 Deion Branch Named as the Director of Player Development

“To have one of the greatest wide receivers to ever play at Louisville and a former Super Bowl Most Valuable Player join our staff, is a great addition to our football program,” Satterfield said. “He is a recognizable name here at Louisville – one that our players can look up too.  We are excited to welcome back Deion to his alma mater.”

Branch, who’s No. 9 jersey is one of UofL’s Honored Jerseys, played for the Cardinals from 2000-01 and made a lasting impact on the program.

In those two seasons, Branch’s numbers rank up there with some of the finest wide receivers in school history. He totaled 143 passes for 2,204 yards and 18 touchdowns. He stands seventh all-time in receiving yards with 2,204, ninth with 143 receptions and tied for fourth with 18 touchdowns, and helped the Cardinals earn a pair of league titles.

The previous season, Branch earned first-team all-league honors for the second-straight year after catching 71 passes for 1,016 yards and nine scores. He caught eight passes for 194 yards (sixth-most in school history) and a score versus Cincinnati.

After helping the Cardinals win two C-USA Championships, Branch was selected in the second round of the 2002 NFL Draft by the New England Patriots.

While with the Patriots, Branch was named the Most Valuable Player of Super Bowl XXXIX, after tying former San Francisco 49ers wide receiver Jerry Rice and former Cincinnati Bengals tight end Dan Ross for the Super Bowl reception record with 11 catches for 133 yards. He was the first receiver to win the award since 1989 when Jerry Rice had his 11-catch game.