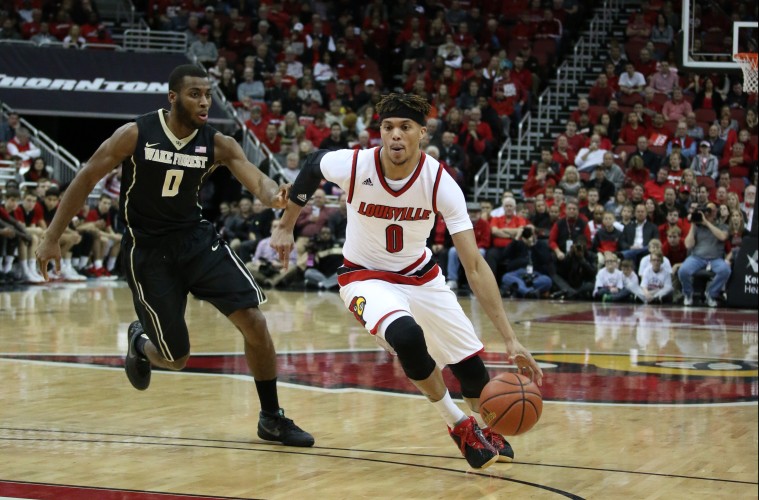 University of Louisville guard/forward Damion Lee is among ten watch list finalists for the 2016 Julius Erving Small Forward of the Year Award, announced today by the Naismith Memorial Basketball Hall of Fame.  Named after Hall of Famer and 11-time NBA All-Star Julius Erving, the annual honor in its second year recognizes the top small forwards in Division I men’s college basketball. A national committee comprised of top college basketball personnel determined the watch list of 20 candidates in October, which has now been narrowed to just ten.

Lee posted his seventh 20-point game of the season against North Carolina last Saturday with 24 points, five rebounds and 4-of-7 shooting on three-pointers.  The 6-6 Lee who hails from Baltimore leads the Cardinals in scoring and is ninth in the ACC, averaging 17.0 points and 1.5 steals (sixth in the ACC) while connecting on 47.4 percent of his shots from the field.  He passed the 1,900 mark for career scoring against North Carolina. Lee is playing his final collegiate season at UofL after transferring from Drexel, where he was the nation’s No. 4 scorer last year (21.4 ppg).

“As a small forward, Julius Erving excelled at both the collegiate and professional level for nearly thirty years,” said John L. Doleva, President and CEO of the Basketball Hall of Fame.  ”Dr. J is one of the most gifted athletes to ever play the game of basketball and it only seems right that this award would bear his name.”

Julius Erving attended the University of Massachusetts and averaged 26.3 points and 20.2 rebounds per game, making him one of only six NCAA men’s basketball players to average more than 20 points and 20 rebounds per game. After two seasons, Erving made the jump to the American Basketball Association and was the league’s most recognizable player when it merged with the National Basketball Association in 1976. During his professional career, Erving won three championships, four most valuable player awards and three scoring titles. In 1996, Erving was named a member of the NBA’s 50th Anniversary All-Time Team and in 1993 he was inducted into the Naismith Memorial Basketball Hall of Fame.

In March, five finalists will be presented to Mr. Erving and the Hall of Fame’s selection committee for the 2016 Julius Erving Small Forward of the Year Award.