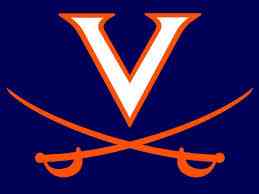 Mike London’s fighting Cavaliers of Virginia shut down UCLA and helped dash Brett Hundley’s Heisman chance before it even had a chance to get going. The Hoos forced two turnovers and overwhelmed the Bruins – defensively at least – and if wasn’t for Virginia’s own offense giving the Bruins three scores, they’d have probably won the game. Virginia actually has plenty of talent if we calculate the program’s recruiting prowess.

Now think of it in another way. UCLA has seemingly no business to be ranked in the Top 15 of the Country and their underwhelming performance against Memphis last Saturday is another example of that. UCLA isn’t Louisville. Jim Mora isn’t Bobby Petrino either.

Before Virginia’s win over the mighty Richmond Spiders this weekend, they had lost ten straight. UVA lost its last final four games of 2013 by a combined margin of 153-56. Yes, each year is different but teams rarely overcome such disparities in one season. Virginia is better but calling them ‘good’ would be a stretch as of now. When I see Virginia, I see a team a pretty good defense that’s held back by a woeful offense. I see a team that will present challenges to Louisville but I also see a team that Louisville should beat. Even on the road. Even on the moon. Though the moon may actually have more attendance than UVA’s last home game. 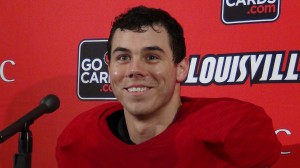 Will Gardner Photo By Mark Blankenbaker

At Monday’s weekly press conference, Bobby Petrino didn’t speak for a long time but what he did say was important. He talked about Virgina’s defense being impressive, he said they would be challenged. He’s right. Virgina will test the thing that scared Louisville fans about Will Gardner’s opening game the most – his ball security. He had two fumbles, both times in critical spots of the field in Louisville’s opening game against Miami. Last weekend, the Cavaliers forced seven – yes, seven – turnovers against Richmond. Four were fumbles, two of those fumbles we’re from the Quarterback. After the Miami game, Bobby Petrino said they’d immediately get to work with Will Gardner. They’d teach him to get the ball closer to his body. He’d also noted that not taking a hit in nearly three years may have also contributed to the turnovers. Virginia will show what improvements have been made.

There’s also the other issue that Louisville’s road trip to Virginia poses: Simply that it’s on the road. It’s not Papa Johns Cardinal Stadium, it’s a foreign place that no player on the Louisville Football roster has played a game of football. It’ll be a new experience for Quarterback Will Gardner, who has never started a collegiate football game on the road. He’ll have to control his emotions, he’ll have to remain poised. It’s a 12:30 start and discovering that Charlottesville isn’t known for its strong home field advantage, the game should serve more as a warm-up for what’s to come but could still be a tough learning lesson for the Cardinals.

If Clemson, Notre Dame and Florida State are the three major tests on the Louisville Football schedule then Virginia is an introductory quiz. Louisville is 2-0 and the Cards are good but we simply can’t say how good yet. If College Football was black and white, one could say that if Louisville struggles against Virgina, then we should reconsider are evaluations of this team. Sadly it isn’t that simple. But sure, Louisville’s performance on Saturday could very well serve as precursor for whats to come.

What Virgina can doubtebly teach Cardinal fans is how much ‘Bobby Ball’ has been instilled at Louisville. When Petrino faced highly thought of defenses in the past, his teams have still managed to move the ball well. The story has rarely been about an opponent stopping his offense in a loss, it’s simply that the opposing offense was more efficient.  Is that the case with that team? Has UofL transformed to the Petrino way this early?

Yes Louisville will be challenged on Saturday afternoon, yes the defense they face will force Will Gardner to continue to show growth and development.  However it’s not one of the those test that you’ve stressed and studied all year for, it’s more like a quiz and it’s one the Cardinals should pass.