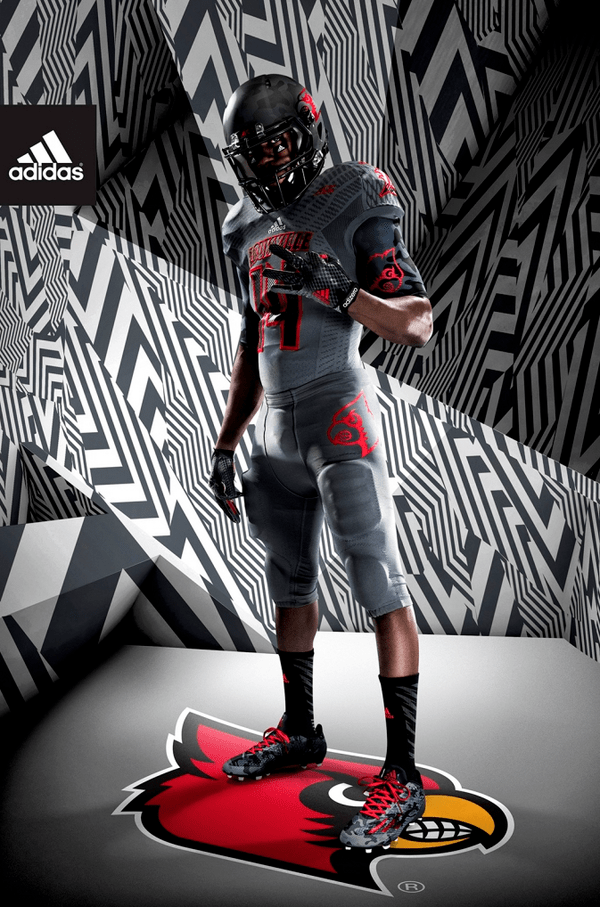 “If you look good, you play good and I’ll think they’ll help us recruit”

Simple, and pointed but precisely true. Louisville unveiled its second alternate uniform for the season yesterday. A grey schemed, futuristic themed jersey (see above). Louisville will unveil this uniform combination when Louisville plays Florida State in perhaps the biggest game ever in Papa John’s Cardinal Stadium.

Charlie Strong doing about 25% of what Bobby Petrino does? That sounds accurate.

Bobby Petrino can make many unique formations. He can score dozens of points. He can make your defense look silly. But as trivial as this sounds, this may be the best decision he’s made since returning to Louisville – pushing the whole fancy uniform agenda, that is.

Before, Petrino made his return, Charlie Strong didn’t believe in the whole alternate uniform thing. In fact, if he had it his way Louisville probably would have worn the same uniforms each game. That message is wrong, it’s boring and for a school like Louisville it’s an agenda that shouldn’t be pushed.

The message should be as follows: be flashy, be fresh, be adventurous and be creative.

James Quick is a good person to ask about this subject. The former five star wide receiver prospect and current Louisville star knows all too well about the lures colleges will use to attract potential recruits. He was asked about the new uniforms and if cool, unique uniforms had any effect on a decision a recruit may make when picking a school. His response?

“If you see a new uniform as a recruit then it’s gonna take the pitch from here to here,” Quick explained. “From low to medium, from medium to high. Because jerseys for a younger guy matter because they wanna go out there and look good so they can play good.”

Ask Oregon about this, the virtual proprietor of alternate uniforms understand this logic perfectly.

Seemingly each game, the Ducks from Eugene unveil a new uniform. The school makes sure everyone knows what those new uniforms look like and more importantly who will be wearing them.

A few days before they play, they’ll post the uniform to Twitter. They debuted the ‘Black Mach’ speed jersey this weekend. That post resulted in roughly 2,000 retweets and articles from Bleacher Report and College Spun. Each week they repeat that cycle, and each week national outlets post articles about those new uniforms. Who reads those articles, who sees those new uniforms may not always matter. However, what does matter is that Oregon is constantly in the headlines with those new uniforms. You had better believe it’s difficult for potential prospects to not always hear about that.

It should be noted that this logic doesn’t apply to those like Alabama. I would struggle severely to point out the last time The Tide dawned another uniform other than then their traditional style. That approach works for Alabama, what other recruiting boost do they need other than ‘We’re Alabama’?

That’s simply not the case for Louisville.

When Louisville announced the new uniforms on Monday evening eventually over the schools Twitter account, reactions from the fan base where mixed but they we’re bountiful. Some people hated them, some people loved them. Those who hated them, led with the charge of Louisville needing to depart from Adidas. Which is strange considering that’s the very brand that appears to be putting Louisville at the forefront of their product. It also seemed that the younger generation of twitter liked them, the older generation not so much.

But anyway. That’s not really the point here, the point is people we’re talking about them. Plenty of people and that’s half the reasoning for doing such things. Mission accomplished.

For Louisville, something like rolling out new uniforms each or every other game is a great way to boost popularity. When they face Florida State the night before Halloween, it’ll be another national showcase for the Cardinals. Recruits will be watching, and sure they’ll be watching their performance and how the Cardinals play, but they’ll also be looking at what they look like and they’ll be telling others too.