Cold Shooting Ladies Heat Up Late Pull Away From Pitt 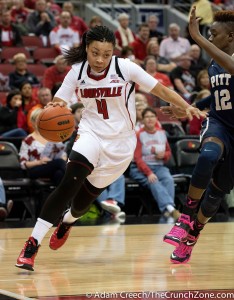 In what Coach Jeff Walz described as a slugfest, his Lady Cards proved to be the tougher team.  Battling Pittsburgh’s tough defense, the Cards turned the ball over 14 times and shot 30.9% on the game from the field.  It wasn’t all bad news for the Lady Cards however, as they limited Pittsburgh to 21% field goal shooting and forced 17 turnovers of their own.

What the game lacked in offensive sizzle, it made up for in bruises and physical play.  In the first half, while Jude Schimmel advanced the ball up the court, her defender, Brianna Kiesel was greeted with a hard screen that would have made Otis George proud.  Kiesel fell to the court, and for a moment, the Lady Cards enjoyed a 5-4 power play advantage.  Not to be outdone, Jude found herself the recipient of an equally hard screen later in the game.

The largest advantage for the Lady Cards came from the charity stripe where they outscored Pittsburgh 14-5.  In the postgame, Coach Walz detailed his strategy around keeping the Panthers off the line.  “We knew we couldn’t come down on them on a challenged shot.”  “Kiesel hit 12 or 14 free throws in her last game so we needed to challenge her without fouling.”

While dropping the game was dissapointing in and of itself, the biggest loss may still yet to be felt for the Lady Panthers.  With 10:40 left to play in the game, Brianna Kiesel drove to the basket and was fouled by Emmoni Henderson.  Kiesel crashed awkwardly to the ground, appearing to land on her elbow.  Kiesel left the game, and would not return.  From that point forward, Louisville controlled the pace and their defense stepped up allowing only one basket during the last 7:26 of the game.

The last 7:26 was marked with a new defensive twist for the Lady Cards as they went exclusively to a 2-3 zone.  Coach Walz described the reason for the switch, “We certainly hope Kiesel is okay, but once she went out, we were able to go zone because they were down to only one other good three point shooter.”  That good shooter was Monica Wignot who came into the game hitting 41% of her three point tries on the season.  On Sunday, she would go only 1-10 from the floor, including 1-4 from the three point line.  Walz added, “We said coming into the game, someone other than 3 (Kiesel) and 24 (Wignot) would have to beat us.”