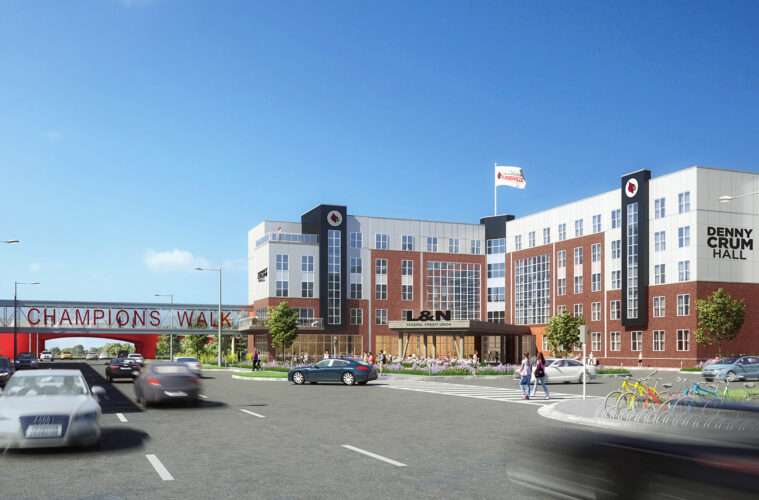 The University of Louisville staged a ceremonial groundbreaking on Tuesday for Denny Crum Hall made possible by L&N Federal Credit Union, a new residence hall being built on the UofL campus.

Named for the Cardinals’ former Hall of Fame men’s basketball coach, the facility will be located across Floyd Street from the Planet Fitness Kueber Center.  It will be built for occupancy by the fall 2022 semester and will house several Cardinal student-athletes, as well as other UofL students.

Crum participated in the ceremony on the day he celebrated his 84th birthday.

“This means a lot to me,” said Crum, the Cardinals’ winningest basketball coach who has been a part of the Louisville community for nearly 50 years. “I feel really good about this project.  It will be a great addition to the university.  Just driving up today, it’s astounding how much this campus has grown.  I love this university and have put my heart and soul into it.”

Crum served as UofL’s men’s basketball coach for 30 years (1971-2001), retiring following the 2000-01 season.  He directed Louisville to the 1980 and the 1986 NCAA Championships, ranking him as one of only 14 coaches in NCAA history to win two or more titles. Six times he guided the Cardinals into the NCAA Final Four, including four times in the decade of the ’80s. He was inducted into the Naismith Memorial Basketball Hall of Fame on May 9, 1994.

After his retirement, Crum continued to work as a special assistant to the UofL president for several years. The KFC Yum! Center court has been named in his honor.  Since 2001, The Denny Crum Scholarship Foundation and the Denny Crum Scholarship Fund at UofL have awarded over a million dollars benefiting over 425 students.  The San Fernando, Calif., native made Louisville his home and has lent countless hours of his time for charitable causes throughout the community for the past 49 years.

The $23.5 million, 128-bed residence hall that was announced on Oct. 28 is a partnership among UofL Athletics, UofL Campus Housing and a third-party developer consisting of Buffalo Construction, Inc. and Investment Property Advisors, who also developed Cardinal Towne, another campus housing project.   L&N Federal Credit Union has provided a $2.25 million gift to the Cardinal Athletic Fund to promote the legacy of UofL Athletics through naming the facility in Crum’s honor.

The dorm will house a mixture of student-athletes and non-student athletes. Men’s and women’s basketball and women’s lacrosse student-athletes – who each train in the adjoining facility — will live in the residence hall in which UofL Athletics will guarantee occupancy for 63 of the 128 beds to remain within the NCAA requirement of no more than 50% of the beds being occupied by student-athletes.