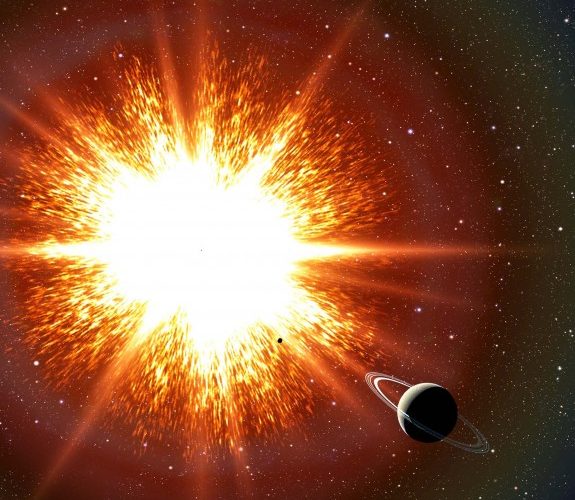 2016 Louisville Cardinal Football: Chaos is in the ‘Cards. 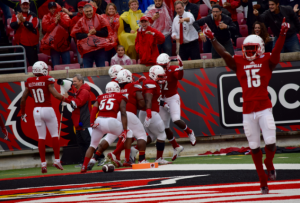 There may not be another team in the nation that has garnered more preseason hype than the Louisville Cardinals.  Most of the adulation stems from the return of 9 starters on a defense that finished 19th in the nation in total defense and 39th in scoring defense last season, and the reported progression of electrifying true-sophomore quarterback Lamar Jackson.  If the ‘Cards can live up to their advanced billing, few teams are positioned to wreak chaos like the 2016 Louisville squad.

Much of the discussion regarding 2016 ‘Cards centers around whether they can beat Clemson and FSU and win the ACC Atlantic.  It may be a bit premature to believe UL can do this, but it isn’t farfetched.  The more like scenario however, is UL splitting the Clemson/FSU games and wining out to finish 11-1.

While it’s a tall order, beating FSU or Clemson is not some sort of impossible task.  Last season Georgia Tech toppled FSU in Atlanta, upsets happen often in college football, especially when a number of conditions favor the underdog.  With that in mind, it’s not inconceivable to think a talented ‘Cards team can knock off FSU this year.

Favorable conditions suggesting UL can beat FSU are as follows:

2.      The smart money is on QB Deandre Francois to win the starting gig for FSU.  If he wins the job, the former 4-star IMG Academy (Florida) product will be playing in the third game of his career against an opportunistic defense known for forcing turnovers.

3.      If Francois fails to win the job, Sean Maguire will be at the helm for FSU. SMag is a pure pocket passer.  That’s me being nice.  Some may call him a statue.  Others will point out that he is fresh of a broken ankle suffered in FSU’s Peach Bowl debacle against Houston on New Year’s Eve.

4.      One of Louisville’s greatest strengths this season will be DeVonte Fields coming off the edge and DeAngelo Brown collapsing pockets.  Regardless of who is under center, the FSU line will have to be on its A-game and their wide receivers will have to become quickly in-synch with a new QB in Francois, or get open quickly with a quasi-ambulatory Maguire.   Louisville’s ball hawk secondary could be in for a big day.

5.      On offense, Louisville trots out three formidable weapons at the tight end position in Cole Hikituni, Micky Crumb, and Kieth Towbridge.  FSU’s linebackers are rather inexperienced outside of Ro’Derrick Hoskins, and FSU’s star position players such as Trey Marshall and LeVonta Taylor are undersized and don’t match up well against athletes of this size and speed.  I wouldn’t be shocked to see Charles Kelly designate all world sophomore safety Derwin James to cover one of these tight ends in two TE sets, which will take him out of pass rushing and spy duties against Lamar Jackson.  Last year in Tallahassee, Kelly’s deployment of James as a Jackson spy was one of the key reasons Lamar was held to 32 yards on 19 carries.

Considering these factors, an upset win over FSU may happen for Louisville, but on the flip side, FSU’s defense is built to stop running QB’s like Watson and Jackson with sideline to sideline players all over their 3-3-5/4-2-5 hybrid scheme.  Another negative for UL against FSU is that Dalvin Cook returns and the Heisman candidate is a ‘Card killer, amassing 270 yards rushing and four touchdowns, as well as eight receptions for 100 yards in two games.

As good as Louisville’s defense was statistically, they tended to lose focus in certain games and Josh Harvey Clemmons and Chucky Williams were liabilities last season.  This year, Williams will return at strong safety and Harvey-Clemons has been moved to weak inside linebacker.  I’m not a fan of moving senior players to new positions, but if Harvey-Clemons learns to take better angles, read the offensive line instead of the QB, develop a hardnosed attitude for shedding blocks and getting a hat on ball carriers, and Chucky Williams improves, this defense can be elite.  I may be knit-picking here, but a lot of the returning draft-eligible Louisville defenders returned for a reason and the loss of Rankins up from and team leader James Burgess at linebacker isn’t something to take for granted, especially considering the thumping the FSU offense put on the Cards’ defense last season.

The bottom line is this; the Cardinals’ defense will have to be hitting on all cylinders and the ‘Noles will have to be fatigued and unfocused on September 17th if UL is to pull of the upset.

But hey, since it’s preseason and hyperbole rules the day, let’s say UL does beat FSU, what about the rest of the picture?  Clemson returns almost everyone from its record breaking 2015 offense this season.  Louisville will play the Tigers in Death Valley, two weeks after FSU at Papa John’s, and coming off a road game in Huntington, West Virginia against a tough Marshall squad that won ten games last season.  Clemson averaged 38.5 points per game last season, including 45 points against UNC in the ACCCG, 37 against Oklahoma in the semi-final playoff game, and 40 against Alabama in the NCG.  In fact, Alabama would have finished with #1 in total defense last season, had Clemson not gained 550 total yards against the Tide in the NCAA title game.  I have Clemson rolling to a double-digit victory over Louisville because this season, Cole Stoudt ain’t running down that hill.   I will admit however, that I’m prone to err.  I bet FSU would beat Georgia Tech and cover last year. I also thought law school was a solid investment in my future, and when I was a young Marine I got married to get that BHA bump, so don’t let me influence what you and your bookie talk about in private.

Anyway, outside of FSU and Clemson, the rest of Louisville’s ACC schedule isn’t very daunting and they should win all of those games.  If you put a gun to my head and asked me to pick UL to beat one of FSU or Clemson, I think they have a better shot to knock off FSU, but I don’t see them beating either squad. But let’s operate on the premise that the ‘Cards knock off FSU, lose to Clemson and run the rest of the table, including Houston in TDECU Stadium on a Thursday night in November.

Let’s assume FSU beats Clemson, Clemson beats Louisville, and Louisville beats FSU, and all three teams finish 11-1.  Everyone drink.  In this scenario, the playoff rankings committee will hold the ACC Atlantic crown in its flimsy grasp and clumsily drop it on the head of one of those three teams.

So who has the best case?

With the strength of FSU’s schedule, a one loss Seminole’s team will likely get the nod.  Clemson’s toughest games in order, are FSU on the road, Louisville at home, and Pitt at home. Louisville’s toughest games in order are Clemson on the road, FSU at home, and Houston on the road. One has to believe if UL’s only loss is to Clemson, their strength of schedule may overcome a close head-to-head loss in Death Valley, and give them the nod over the Tigers in the rankings with FSU going to Charlotte.  In that event, both FSU and Louisville (or maybe all three, including Clemson) could represent the ACC in the playoffs.

This is a beautiful chaos scenario that would shake up the entire college football playoff system, with two (and possibly three) ACC Atlantic teams in the CFB Playoffs. Can you imagine the national sports media meltdown if the playoffs consisted of the SEC champ, the ACC Champ, and two ACC at-large squads?  When Donald Trump is on the precipice of obtaining nuclear launch codes, anything is conceivable.

Coming Next: Why the “UL must beat Clemson and FSU” debate is short- sighted.