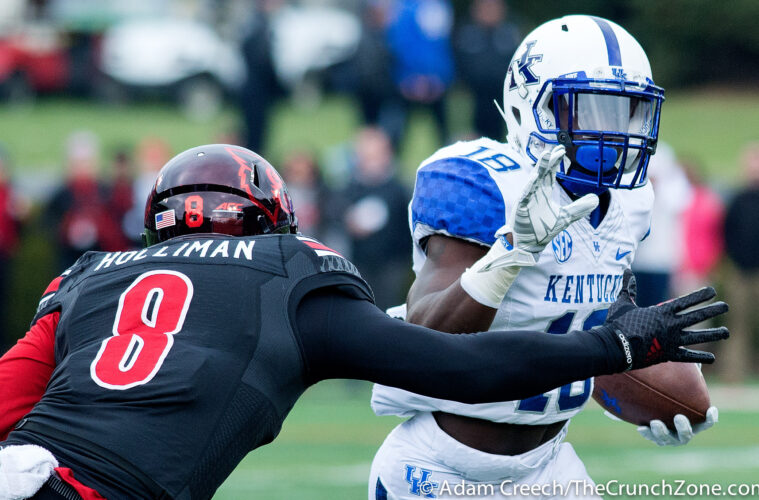 One primary focus of the 2017 recruiting class for the Louisville football team was to strengthen the defensive secondary. Earlier on in the process the Cardinals locked up a slew of talented defensive backs including Rodney Owens, TreSean Smith, Anthony Johnson, Lyn Strange, Tre Norwood, and Kaheem Roach but one particular target remained in the coaches sights, Russ Yeast.

Yeast, who decommitted from UK on June 16th of this year, has visited Louisville multiple times and established a very good relationship with both the coaches and commits. Despite these multiple visits Alabama and Auburn offers loomed large, that was, until Yeast pulled the trigger on October 24th and committed to Louisville.

The 5’11” 185lbs athlete from Greenwood, IN has enjoyed a spectacular senior year, along with his team Center Grove, who plays for the Indiana state championship Friday when they take on Carmel (9-4).

While his offensive statistics are impressive, his defensive skills are what the Louisville coaches are mainly after.

“I don’t think running back is really in the question.” Yeast said regarding the position he expects to play in college, “If anything I play offense it would be more receiver, not running back. I’ve been playing running back just because the style of offense the team plays is running back heavy and we don’t throw the ball much.”

“I come in on defense in situations. I play on third downs and passing situations on defense. I don’t have much film because when I come in the game nobody really throws the ball at me.” stated Yeast who added that he actually prefers defense but is willing to play anything that gets him on the field the fastest.

So what has he improved most this year?

This speed has helped make Yeast a highly sought after commit with offers from the likes of Auburn, Alabama, Nebraska, and Ole Miss. While he does have speed, Russ Yeast also has a plethora of other skills that make him such a special prospect.

During his recruiting process, coaches Keith Heyward and Lonnie Galloway developed a close relationship with the star athlete and the work Louisville put in on the recruiting trail ended up being the reason Yeast chose the Cardinals.

As one can imagine, a decommit from one rival school and a commitment to another could be an eventful experience for multiple reasons including coaches, friends, fans, etc. not to mention his dad, Craig Yeast, was a star wide receiver for the Wildcats. For Russ, though, the change from blue to red really wasn’t that big of a deal.

“It really wasn’t that difficult for me because I wasn’t really thinking about other people and what they might think about my decision.  I was worried about what was going to be best for me. A lot of the guys I had really good relationships with that were committed to Kentucky, they decommitted as well.”

Along with the coaches, the Louisville commits also made an impression on Yeast and even though they weren’t the reason UofL was his top school, they definitely helped finalize the deal.

“It was definitely fun talking to them for a while. Tre (TreSean Smith) put me in the Louisville commit group chat so they were always on me pretty much every single one of them.” Yeast said. “We all had a really good relationship. I really think that they were the reason that got me to commit.”

Now that Russ Yeast has officially joined the class with the help of fellow commits, will he also join in the recruiting?

Along with his relationship with the coaches and commits, academics also played a significant part in the decision for the 3-star athlete and his plan of majoring in Exercise Science and becoming a physical therapist.

“Obviously they made me a top priority and I have a good relationship with the coaches. So I had all those things checked off the list. And then I needed to go visit and spend a lot of time in academics, because me and my mom needed to make sure that academically they were going to have exactly what I wanted.” Yeast stated, “Once we got that squared away and had all that checked off, I pretty much checked all the boxes off. I went home and had a discussion with my mom and dad and basically felt like it was the best place for me.”

The 2017 football season could be the final year for both starting cornerbacks, Shaq Wiggins (final year) and Jaire Alexander (possible NFL draft early entrant). To help alleviate their departure, Louisville has made it a focus of this year’s recruiting class to reload the secondary with talent capable of making a run at the national title. With a lock-down cornerback like Russ Yeast in the fold, Louisville’s defense is one step closer in helping to achieve that goal.