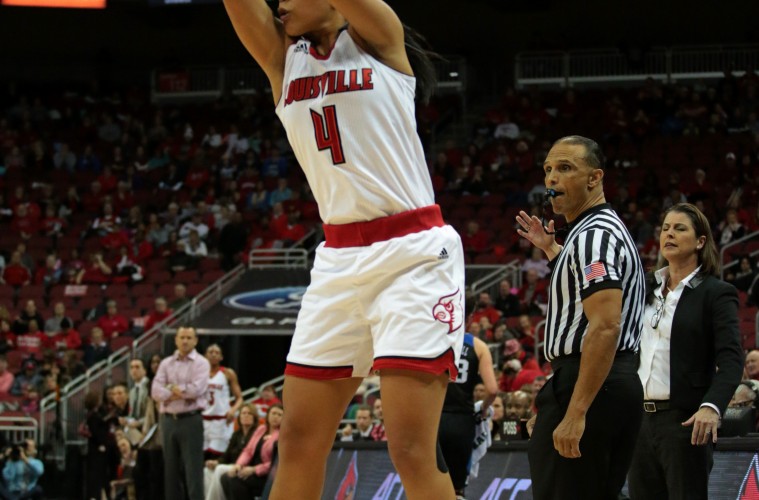 Sometimes it’s better to be lucky than good.  Yesterday Jeff Walz’s squad needed ability and good fortune to come away from Holliday Gymnasium in Raleigh, N.C. with the win over the N.C. State Wolfpack (13-6, 4-2).  It was the 23rd ranked Cardinal’s 14th win of the season, their 11th in a row, and it keeps them with a perfect 6-0 record in the ACC. This win, however, did not come easily.

From the beginning it appeared that Louisville was going to breeze to another wire to wire snoozer in conference play.  Opening the game with a 17-7 lead, NC State was forced to call timeouts to try and stop the run.  Louisville still led 20-13 after a Mariya Moore free throw with 2:54 to play in the first, but it would prove to be the last points for the Cards in the quarter, and NC State actually took the lead 22-20 going into the second frame.

If the first quarter rally surprised the Cards, the second quarter performance by the Wolfpack likely scared the hell out of them.  A three point barrage, some timely defense, and the Pack’s lead ballooned to 50-36 at the half.  While the Cards’ defense had been their calling card during the ten game win streak, it appeared that it would be their undoing in Raleigh, as NC State shot 52.3% from the floor, and 66.7% (10-15) from the three point line for the game.

All was not lost however, as Mariya Moore led the Cards to the come from behind win.  Moore poured in 31 points in the victory, a career high, and dished out 7 assists to go along with 3 rebounds.  None of Moore’s points were larger than the last two.  With 3.0 seconds left to play in the game and the score tied at 90, Moore strolled to the line and calmly sank a pair of free throws to secure the win.  They were her 3rd and 4th free throws in a row in the last 17 seconds of game action, and they capped a five point rally in the game’s final 23 seconds to secure the win.

Next up for Louisville is a game at Syracuse next Monday at 7:00.  The game will be available on ESPN3, and locally on the radio at 790 WKRD.