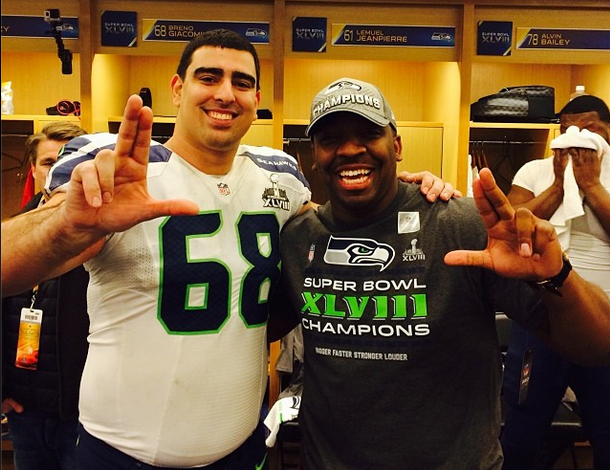 Breno Giacomini starts at Right Tackle for the Seattle Seahawks, Champion of Super Bowl XLVIII, protecting Russell Wilson and paving the way for 341 yards of offense in a 43-8 victory.  Breno came to UofL as a part of the 2004 Class (Bobby Petrino’s 2nd recruiting haul) from Malden High School in Massachusetts as a 6-7, 242 lbs Defensive Lineman.  Giacomini didn’t last long at DE and was quickly moved to Tight End where he played until he grew into an Offensive Tackle. Last night Breno played at 6-7, 318 lbs.

Greg Scruggs had a promising rookie year in 2012 and was expected to contribute to the 2013 before suffering an ACL injury in his right knee that required surgery last May.  Scruggs is famous for being recruited to play High School football out of the band where he played quad drums, until his senior year when he finally was convinced to play football.  Greg was a part of the 2008 class by Steve Kragthorpe (2nd class) out of St. Xavier H.S. in Cincinnati, OH.