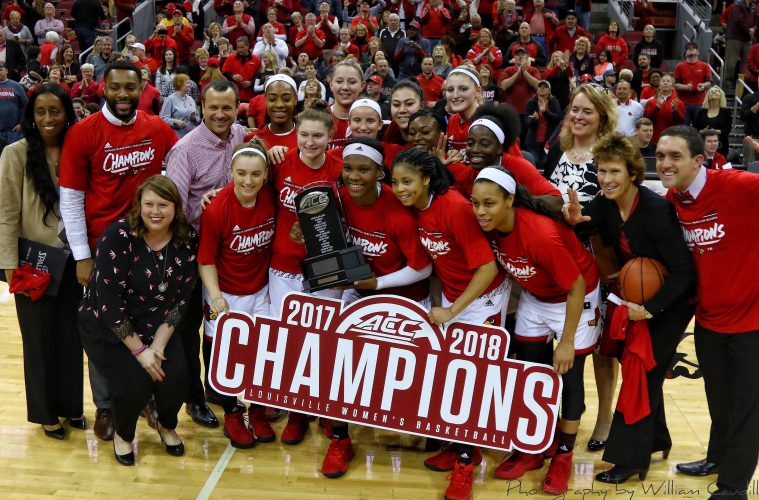 It marks the second time in three years that a UofL player has won the honor as Myisha Hines-Allen took home ACC Player of the Year as a sophomore in 2015-16. It marks Walz’s first Coach of the Year award.

She has 584 total points this year, which ranks 10th in school history, her 98 3-pointers are tied for third all-time and her 44.5 3-pt percentage ranks second all-time.

The junior from Douglasville, Ga., has 1,618 career points, which ranks ninth in school history and with six 3-pointers vs. Pitt on Sunday, she passed Sara Nord for third place all-time in made threes.

Walz has led the Cardinals to a program-best 29-2 start and the school’s first ACC title despite returning just two starters from a team that went 29-8 and reached the Sweet 16 a year ago. UofL won its first 20 games this season, which set a program record for consecutive wins to start the year and the longest winning streak in school history.

Following its 100-67 win over then-No. 2 Notre Dame, Louisville moved up to No. 2 in the Associated Press poll, its highest ranking ever.

Already the winningest coach in Louisville women’s basketball history, with a record of 292-95, he is just eight wins shy of the 300-win milestone. He has directed Louisville to a pair of national runner-up finishes (2009, 2013), three Elite Eight appearances (2009, 2013, 2014), seven trips to the Sweet 16 and nine NCAA Tournament appearances.

Louisville opens the ACC Tournament on Friday at 2 p.m. ET against the winner of  No. 8 Syracuse and No. 9 Virginia Tech.