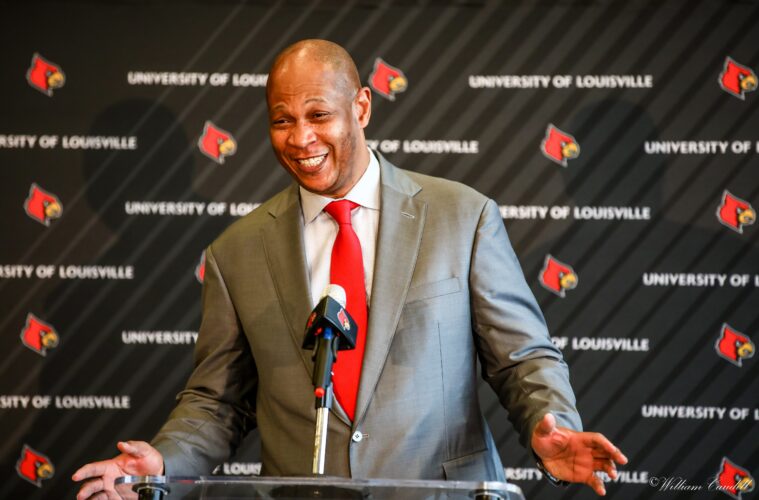 The Cardinals will host seven non-conference tilts at home, along with two exhibitions and 10 league contests in head coach Kenny Payne’s first season at the helm. The schedule includes three games against in-state competition – home contests against Bellarmine and Western Kentucky, as well as a visit to Kentucky.

“We are excited about the challenge of our schedule,” Payne said. “To play at least 15 games against programs that were in the postseason last year is truly a difficult schedule to say the least, to go along with ACC play which we know is one of the best conferences in college basketball. We will get tested on who we are and the culture we are trying to establish. Win or Learn.”

Eight of the Cardinals’ 13 non-conference opponents won 18 or more games last season. Louisville’s strength of schedule has been among the top 18 toughest in the nation by the RPI or NET in 11 of the past 16 years.

Including the Cardinals’ 20-game ACC schedule, at least 15 of the Cardinals’ 31 games will be played against teams that participated in postseason competition last season, including at least 10 from the 2022 NCAA Tournament field (NCAA Tournament: Duke, Kentucky, North Carolina twice, Notre Dame, Miami twice, Virginia Tech; NIT: Virginia twice, Wake Forest, Wright State; The Basketball Classic: Appalachian State). Six of the eight teams in the Maui Jim Maui Invitational participated in the 2022 NCAA Tournament, including at least the first two opponents UofL will face in the event.

Numerous UofL opponents are ranked among the ESPN way-too-early Top 25, including non-conference foes No. 4 Kentucky and Maui Invitational participants No. 7 Creighton, No. 9 Arkansas, No. 16 Arizona, No. 23 San Diego State and No. 24 Texas Tech. Three ACC teams are also included in those rankings in No. 1 North Carolina, No. 5 Duke and No. 18 Virginia.

Including a pair of exhibition games against NCAA Division II opponents, the Cardinals’ first five games will be played at home in the KFC Yum! Center. UofL will face its first outside competition in an exhibition game on Oct. 30 against Lenoir-Rhyne University, a team coached by UofL’s No. 16 all-time scorer Everick Sullivan (1,583 points from 1988-92). Chaminade University of Honolulu, which the Cardinals have previously faced on four occasions on visits to Hawai’i, will provide the opposition in UofL’s second home exhibition game on Nov. 3.

The Cardinals officially open their 2022-23 season in the KFC Yum! Center on Nov. 9 against Bellarmine, a team located about four miles from the arena and coached by former UofL assistant Scott Davenport. It will match the third-earliest season opener in UofL history. The Cardinals will follow with home games against postseason tournament participants Wright State on Nov. 12 and Appalachian State on Nov. 15.

Louisville will face Arkansas in the first round of the Maui Jim Maui Invitational on Nov. 21 at the Lahaina Civic Center in Maui, Hawai’i in the second game of the tournament. The eight-team, three-day event will also feature Texas Tech against Creighton on Nov. 21 in Game 1, Ohio State against San Diego State in Game 3, and Cincinnati against Arizona in Game 4. The winners from the Louisville-Arkansas matchup will face the winner of the Texas Tech-Creighton contest on Nov. 22, while the losers of those two games will play each other. The Cardinals’ opponents for Nov. 23 will be determined by their advancement. Ticket packages to join the Cardinals are available at GoCards.com/Maui.  The seven possible opponents UofL could play averaged nearly 25 victories last season and six are ranked in the nation’s preseason Top 25.

Louisville returns home to play Maryland in the ACC-Big Ten Challenge on Nov. 29 against a team coached by former UofL assistant coach Kevin Willard.  The Cardinals will have three more home non-conference games in the KFC Yum! Center in the month of December against Western Kentucky on Dec. 14, Florida A&M on Dec. 17 and Lipscomb on Dec. 20.

UofL will visit intrastate rival Kentucky in Lexington on New Year’s Eve (Dec. 31). While the Cardinals and Wildcats were scheduled to play their rivalry game in Louisville in 2022, COVID-related issues forced last year’s matchup in Lexington to be canceled and the schools agreed to move the planned schedule a year forward and play this year’s contest in Lexington.

Louisville will play three ACC matchups in the month of December, starting Dec. 4 at home against Miami. The Cardinals will also travel to Florida State on Dec. 10 and NC State on Dec. 22.

After concluding the non-conference schedule at Kentucky, UofL resumes ACC play with four of the next five at home, including games against Syracuse (Jan. 3), Wake Forest (Jan. 7), North Carolina (Jan. 14) and Pittsburgh (Jan. 18) sandwiched around a trip to Clemson on Jan. 11.

In total, 12 of Louisville’s first 19 regular season games will be played at home.

Visits to Boston College (Jan. 25) and Notre Dame (Jan. 28) round out the month, followed by home games against Georgia Tech (Feb. 1) and Florida State (Feb. 4). The Cardinals next travel to Pittsburgh (Feb. 7) and Miami (Feb. 11), then welcome Virginia and Clemson on Feb. 15 and 18, respectively.

Louisville plays three of its last four on the road, including trips to Duke (Feb. 20), Georgia Tech (Feb. 25) and Virginia (March 4). The final home game of the regular season comes Feb. 28 against Virginia Tech.

The ACC Men’s Basketball Tournament will be staged at the Greensboro (N.C.) Coliseum on March 7-11.

Times and television assignments will be released at a later date.

Louisville will be guided in 2022-23 by Payne, a veteran college and NBA coach with 17 years of coaching experience and a former Cardinal Basketball great and national champion (1,083 career points from 1985-89). He was named the Cardinals’ new coach on March 18 after two years as an assistant coach with the NBA New York Knicks.

The Cardinals have posted 73 winning seasons over the last 77 years. Louisville is one of only six schools to be ranked in the AP Top 25 poll at least in 18 of the past 19 seasons (since 2002-03, excluding preseason polls) and the Cardinals have finished among the nation’s Top 25 teams in eight of the last 12 years.

Fans will have an initial chance to see the Cardinals in the preseason next month with Louisville Live at Louisville Slugger Field on Oct. 21, followed by the Red and White Scrimmage on Oct. 23 at the KFC Yum! Center. Ticket information will follow at a later date.