What goes up, must come down.. they say. Happy New Year to all, welcome to 2017. Following a much needed win for the rivalry vs Kentucky.. the Cards took an extra couple days off as they continue to fall to ‘Cardinal kryptonite‘ the Virginia Cavaliers.. but hey, lets send 2016 off with  a bang in a border battle vs Indiana.

Now that I’ve seen flash of brilliance from star power for Louisville, who’s going to take them deep into 2017? (who will start each game?) 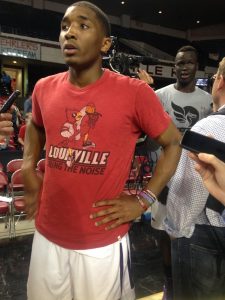 Mitchell is averaging 12.4 points per game and 5.1 rebounds.  He’s flashy and he’s fashioned. 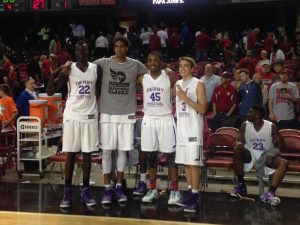 Here’s the clip following Donovan Mitchell’s unanimous win of MVP for the Derby Classic back in 2015 from slamonline.com

Undoubtedly the immediate crowd favorite, Donovan Mitchell showed out in front of his future fans at Freedom Hall.‎ After killing it in the dunk contest at the Night of Future Stars, ‎he continued in the Derby game itself. Leading all scorers with 21 points, you got to see what Mitchell was all about. He was a beast in transition, fearless attacking the rack, and locked down on either guard spot on D. While Donovan didn’t shoot it too well (1-6 from three), you could still see why he’s going to be loved in Louisville.

‎The MVP for the victorious purple squad lived up to his billing as one of the best big men in the country. Like he did early in his high school days, Bryant showed off his ability to stretch the D with his 3 three pointers. He showed off his new arsenal on the blocks too, along with toughness that you don’t usually see in all-star games. The IU faithful came out to see their most highly touted recruit and through his 19 points, he did not disappoint.

to our favorite Cards vs Irish moment…

2-1 in this 4 game stretch vs ranked opponents …

Notre Dame’s only losses this season are to #1Villanova and #15Purdue.  Notre Dame needed overtime to beat Pittsburgh by 1 point this past Saturday in their ACC opener.  Can Notre Dame keep up with high-paced Louisville or are the Irish already fatigued?

The last time we beat notre dame was 2-3 with the title team and that one loss was that 5OT game.  Notre Dame hasn’t lost to Louisville at home in 23 years. Interestingly enough, U of L hasn’t lost its conference road opener in each of the past 9 seasons.