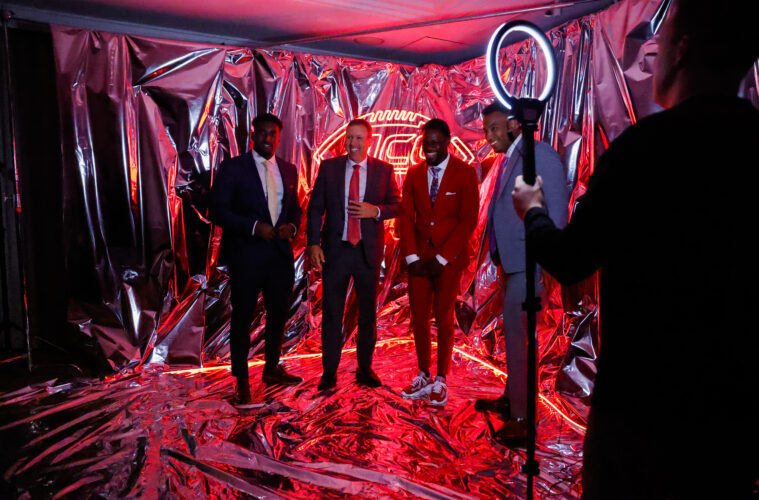 The 2022 Louisville Football Media Guide was released last week in conjunction with the ACC Kickoff in Charlotte. Within the media guide was its annual first look Depth Chart. As is usually the case the 1st depth chart can change dramatically from when those books are printed to when Louisville actually takes the field for its opener on September 3rd vs. Syracuse.

Freshman and Transfers have the most upward potential and we’ll note a few individuals to keep an eye on as Fall Camp carries on.

Malik Cunningham is the unquestioned leader of this group heading into the 2022 season. Louisville is desperate to find a capable back up. Evan Conley played injured last year, Brock Domann was very green. A year later and healthier and perhaps the Cards have a better answer than they did in 2021 when Malik had to come off the field.

Who we are watching: Freshman Khalib Johnson joined Louisville as an early enrollee in January but was limited with an injury during the Spring. Khalib has a lot of size and is a proven winner. Don’t be surprised if he moves up the board during Fall Camp or as the season progresses.

Louisville’s backfield is absolutely loaded. Jalen Mitchell returns as the leader of the position with 722 yards (4.66ypc) from a year ago. Mitchell is a very smart and powerful runner and an absolute chore to tackle.

General consensus in 2021 was that Trevion Cooley needed more carries. Just 1 touchdown in 86 carries, but did run for 5.01 ypc and amassed 431 yards a year ago. Cooley has nice vision and he has the burst the Cards need to break out for long gains. Wouldn’t surprise me at all to see Cooley increase his workload in 2022.

Jawhar Jordan came on after injury and really hit the hole on his few carries in 2021. Jordan did have a Kick Return for a TD in the bowl game. I think he’s a 3rd down back type but if the Cards need a change of pace Jawhar can certainly provide that.

The true wildcard for Louisville this season is Tiyon Evans. Evans is supremely talented. Tiyon transferred to Louisville from Tennessee after coming from Hutchinson CC (JUCO) as the nation’s #1 junior-college running back. Evans had 525 yards (6.48 ypc) on 81 carries and had 6 TDs for the Vols before an injury ended his 2021 season. Can Evans stay healthy and on the field? If he can, this offense has the ability to catapult a player like Evans high up an NFL Draft board.

Who We Are Watching: Freshman Maurice Turner signed with UofL in the 2022 class won a pair of autographed cleats from the NFL’s Tyreek Hill after running step for step with “The Cheetah”. He’s fast. I’d look for Turner on Special Teams in 2022 and maybe in the rotation depending on his Fall Camp.

Trevor Reid was fantastic at Left Tackle last season as a reshuffling of the offensive line moved Reid and Adonis Boone to Guard. Reid is supremely athletic and long and helped keep Malik Cunningham more protected in 2021 than any of his previous seasons.

But not far behind him is Michael Gonzalez who played both left and right tackle a year ago as a true freshman. Gonzalez is a starter looking for a spot.

Who We Are Watching: Max Cabana signed with Louisville in the 2022 class and early enrolled in January. Cabana has good size and comes from a rare Louisville recruiting territory of Massachusetts. Cabana is originally Canadian and also speaks French.

Caleb Chandler was 1st Team ALL-ACC in 2021 and returns to college football in 2022 as one of the best offensive guards in the country. Caleb has slimmed down a touch for his final ride before the NFL and we’ll see just how far up the draft boards he can climb this season.

Luke Kandra is chomping at the bit the get more snaps. Kandra always draws rave reviews from his coaches and teammates and his contribution to Louisville Football is inevitable….. but when!? We are probably close to seeing the Cincinnati Elder on the field on a regular basis for the Cards. He’ll be an impact player once that happens.

Bryan Hudson came in from Virginia Tech and was an immediate impact on the offensive line. Cole Bentley was a mainstay at Center for the Cards the past several years, but having a guy like Hudson already onboard makes this transition much easier than it typical would be in the middle.

Austin Collins gained 13 lbs year over year and Louisville fans may remember his epic performance in the 2020 Wake Forest game where he played Center for the first time in his life as the Cards had several ‘COVID-outs) that day.

Who We Are Watching: Sam Secrest is a Freshman Center who signed in the 2022 class out of Indianapolis.

Adonis Boone caught his stride at Guard last season as Trevor Reid took over at Left Tackle. It was a genius move by then-Offensive Line coach Jack Bicknell. Guard seemed much more natural to Adonis.

Joshua Black started the 2020 game versus Wake Forest as the Cards had a ton of “Covid-outs” and is clearly capable. Black has grown into his frame as a redshirt-Sophomore now. Can also play Center if necessary.

Who We Are Watching: Izaiah Reed signed with UofL for the 2022 class this December and held offers from Ole Miss, Boston College, and Colorado to name a few. Izaiah’s recruiting rankings varied wildly with On3 ranking him as high as the #156 player overall in the 2022 class.

Renato Brown just keeps performing for Louisville Football. He’s been in the regular rotation since 2020 and he’s started 21 of 24 games since that time. He’s consistent and he’s probably going to start making some NFL noise in the 2022 season.

Kobe Baynes has worked to crack the rotation for several years now, so it’s nice to see him in the 2-deep here. Baynes came to the Cards out of Jacksonville with offers from Arkansas, Florida State, Ole Miss, Michigan and Miami.

Who We Are Watching: Makhete Gueye is a native of Senegal who just moved to the United States in 2019. He played at Venice HS in Bradenton, FL and at 6’7, 270 is a raw talent. What’s interesting about Makhete is how physical he is for a new football player. Very intriguing prospect.

Who We Are Watching: Chris Bell comes to Louisville with great size at 6’2, 220 lbs from Greenville Christian School in Mississippi. Bell put up catches against top level Cornerback talent in high school, but still managed to fly under the radar. Bell is physical and can high point a football. Keep an eye on Bell as the Cards come out of Fall Camp.

Ahmari Huggins-Bruce made an impact as a true freshman last season catching 29 passes for 444 yards and 4 TDs (should have been 5). AHB drew Harry Douglas comparisons with his similar build and ability to get open. In fact, Harry didn’t have AHB numbers until his sophomore year. We’ll see if Ahmari can build on his great freshman season in 2022.

Braden Smith took a nasty injury against Florida State that took two stages of surgery during his recovery. Braden is fully cleared to play but we’ll have to see how he does during Fall Camp. He’s a veteran and a former QB that Satterfield likes to use for trickery at times.

Who We Are Watching: Devaughn Mortimer was a signing day flip from Florida State to Louisville in the 2022 class. From Ft. Lauderdale’s Dillard HS, Mortimer is a 4-star recruit with elite level speed. Devaughn may be a factor in the punt/kick return game for the Cards early. Chose UofL over Florida State, Penn State, Texas A&M, etc.

Dee Wiggins has played a lot of Football. He tallied 3 catches for 85 yards and 2 TDs against Louisville in 2019. Dee played in 4 games last year before entering the portal in order to maintain his eligibility.

Josh Johnson is the elder statesman of the group. He’s been at Louisville since 2017 and tore his ACL in 2019. Josh is a solid wide receiver with good hands. He’ll factor.

Who We Are Watching: Chance Morrow at 6’6 200 lbs from Charlotte, NC is an intriguing prospect. Morrow held offers from Oklahoma, Ohio State, Miami, etc. We’ll see if the freshman can crack the rotation early. He’s certainly a big target.

Louisville asks a lot of its tight ends. Dez Melton caught 3 passes last year for an impressive 80 yards. Francis Sherman is always in the mix on the field.

Who We Are Watching: I’d keep an eye out for Victor Mullen who has great size. Also new freshman Nate Kurisky had a bunch of high level offers that suggest he will factor at this spot at some point.

Marshon Ford is the unquestioned leader of this group. Ford led the Cards in receiving with 49 catches and 550 yards in 2021. Marshon and Malik Cunningham’s chemistry is easy to recognize. Isaac Martin is a consistent performer and an elite blocker from this position. Personally, I’m a huge Duane Martin fan, tremendous athleticism and I always feel like he is sitting on something bigger.

Who We Are Watching: Christian Pedersen came to the Cards out of California and chose the Cards over Boise, Kansas, Virginia, etc. It will be worth watching to see if Pedersen can break through after a redshirt-Freshman season.