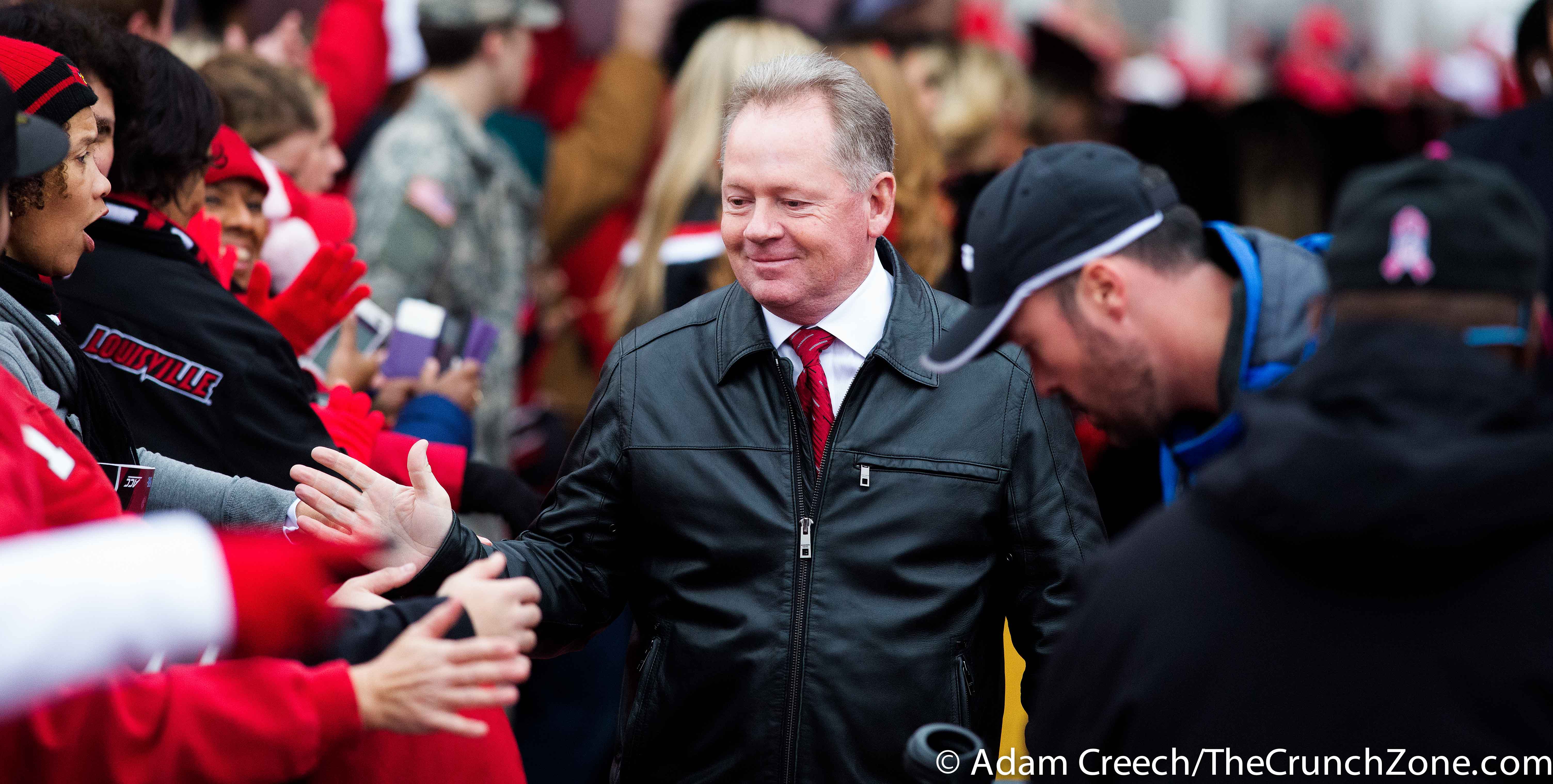 “Obviously we’re very disappointed in last Thursday night. We gave the players a couple days off – Friday and Saturday. Came back yesterday and watched the video. Made the corrections, made all the adjustments we felt like we needed to make, and then we put the game behind us and moved on to this game with Kentucky. We’re very excited about it. We’ve got a good group of seniors that we send out. Their last game here in Papa Johns Cardinal Stadium and everybody on the team – all the coaches, all the seniors – need to make a commitment to make sure we send them out with the win. They’ve done a lot for this program. They’ve put a lot into it. They made the adjustment. Very, very easy for me when I came in and took over the program, and then we’ve added some to it. So between the guys that were already here and the transfers that came in, it’s really helped us in doing what we are looking to do around here. Got a lot of respect for those guys and we want to make sure they go out with a victory. Kentucky is playing good football. They’re doing a good job defensively. They’re secondary is very impressive. They’re covering well. They’re offense has been running the ball really well. They’ve got two one thousand yard rushers, they’ve made a commitment to running the football, and we know going into the game that we’re going to need to stop the run and we’re going to need run the football to win the game. It should be a good matchup.”

“I mean, I think they came back because of the feelings they had for the family atmosphere, that they had on the team, and what they mean to each other. A couple of them could’ve definitely been drafted and came out and a couple of them would’ve had to go through the process and really figure it out, but they wanted to be here. They’ve done a great job of leading this team, and, like I said, we need to make sure they go out with a victory.”

“Well, they’re injured – they were injured – there’s no doubt about it. You go through that process on Friday and Saturday where you wonder what happened, how could this happen, and everybody doesn’t sleep well, but one of the things that sports teaches you is you have to learn how to move on and move forward and put things behind you. One of the things we use is a quote from Muhammad Ali that says, “Inside of the ring or out, ain’t nothing wrong with going down. It’s staying down that’s wrong.” We all understand we have to get off the ground. We got to get ready for a game. We’ve got to have a great attitude. Approach practice properly and approach our preparation properly, and come out and have one more time with our seniors in our home stadium.”

(On if you look at the video or throw it away)

“We already looked at it, yeah. We watched it and put it behind us.”

“There’s a lot more than just one thing, so. When you look at a video and you get beat, you always consider two things. Did you just get beat or did we beat ourselves? And certainly that game was a combination of the two. Give Houston a lot of credit, they’re a very good football team. They did a good job. We didn’t play like we normally do. We got a little bit out of our character, so it’s a combination of the two.”

(On if he was surprised by the offensive line’s struggles)

“Yeah, and the sacks are always a team deal. It’s always the entire offense, it’s not just the offensive line, so everybody’s got to take their responsibility and their part of it. And the penalties, we’ve just got to do a better job of focusing and playing in that type of atmosphere.”

(Bobby, what does it mean to you to have that trophy in the building, the Governor’s Cup? You have won it every time you’ve played this game)

“I mean it means a lot to our program and certainly to our seniors and the seniors that have been here. You know, I like rivalries and I like that we are playing Kentucky on rivalry weekend now. Like most places in the country, I think it helps high school football in the state, and it has become a big game for our state so we are very proud of it.”

(Do you feel like Lamar does need a big game to win the Heisman Trophy?)

“Yeah, our focus is completely on this game and wining this game and doing everything we need to do to be successful and win this football game. Like I said, send the seniors out with a win, and I think Lamar has been that way all year long. He hasn’t been concerned about that. He has been worried about his performance and how I can help my teammates and you have really got to take your hat off to him on how much he has handled it and how much of a great competitor he is, and he truly does care about his teammates.”

“Well, they now have a quarterback that can also run the ball and throw the ball deep and then they are running a lot of the wildcat game. So, they switch it up and I think that the installation of the quarterback has really helped because he has a strong arm and he can throw the deep ball. Once you lose a few people up then you run the ball better, but they also run it a lot, like I said, out of the wildcat more than anybody we’ve played. They’ve made that commitment to that formation.”
(Bobby, how do you look at rivalries and how they affect people in the state and bragging rights?)

“We probably don’t get into that all much. We take a lot of pride winning the game, and I think it is good. I enjoy it. I think our players enjoy it, and it is nice to play them here at home. I think our fans will be excited to come out and support us and get ready to go and help us you know make sure it is loud for third down for our defense, and I think it is a fun game.”

(Since you’ve been back, have fans come up to you and say they would really like you to beat Kentucky?)

“Yeah, ever since the first time I have been here it has been unique place for me because you actually have people in your neighborhood that are Kentucky fans. Which when I first got here I thought, “Man this is really weird,” and it upset me and I’d get mad. You know, tell my kids to go egg their windows. You know, whatever. Actually, I didn’t tell them that, but I wanted too, but then you realize well this is the biggest city in the state of Kentucky and you’ve got both Louisville fans and Kentucky fans here. I remember the first governor’s cup golf tournament I went to and there was a guy I knew really well, that I always felt supported me, wearing a blue sweater and I thought, “man, what the heck!” It shocked me. Then you kind of understand that it is a little different rivalry than when I was in Auburn and Auburn-Alabama completely hated each other. It is really not that way here. You do business with each other, but in saying that, you want to have the pride of wining the game. Everybody wants the pride to walk around the whole year and say, “we won this game.”

(Do you worry about motivation after the disappointment in Houston?)

“No, not at all. We went out and worked last night. We practiced last night. Guys were good. They were focused, putting in great effort. You know what I think we’ll see for sure in practice this week is a group that, you know, practice extremely hard, and extremely focused and is prepared to play really well.”

(You mentioned the seniors, Keith Kelsey in particular, who’s been a leader even before you got here, kind of take us through how he helped you process.)

“Yeah, Keith’s been my guy since I’ve been here that’s been leader of the defense, quarterback of the defense. I still remember after his first spring, talking to him in my office, you know he was a little small, wasn’t really as big as you needed him to be, and we talked about that. He stayed here for the month of May, worked every day in the weight room with the guys in the month of May, and got bigger and stronger and faster, and you could see there was something special about this guy’s mental makeup and his commitment to being a great football player, and then from that point on, he’s had three really, really good seasons for us. You know, he has as much to do in that locker room as anybody because everybody respects him.”

(Given the protection issues in the first half against Houston, what was done to be more effective in the second half?)

“I mean we just tried to settle down a little bit, and focus and concentrate and do what we know how to do, and I think some of it was we were trying too hard and got a little bit out of our character. There’s certainly that aspect of it too.”

(Following the game you talked about special teams, miscues, what that was and you were good for most of the year on special teams.)

“Yeah, you know I think that’s going to play a lot into this game. We’re going to have to do a great job on special teams. We’re going to have to get great returns. You know one of the things we’re missing right now is getting our punt return game back, and getting some yardage out of it and big plays out of it. We’re not getting the opportunities out of it. We’re not holding up. We need to catch the ball and return it. We’ve had a couple where we’ve fair-caught the ball and we’ve had room in front of us to go make yards, so we’re going to work hard at that this week. You know we got beat on a fake punt, and that was something we should have been more disciplined with our eyes and understood what was going on, and not get beat on a fake punt.”

(Bobby, before you took over at Western Kentucky, Kentucky was going through their job search, did they ever reach out to you, did you ever imagine…)

(Bobby, how would you describe your relationship with Lamar’s mom, especially concerning her privacy?)

“Yeah, she definitely wants her privacy. And I would certainly like for everyone here to respect that. You know, I have a great relationship with her. It’s one of the funniest home visits I’ve ever had. She was a lady who was and is extremely proud of her son, extremely proud of how she’s helped him develop, and not only physically but mentally, and she wants to have her privacy throughout this entire issue. She’s been consistent with that, with anybody that’s reached out and talked to her, that she just wants to watch her son play and have everyone respect that for her.”