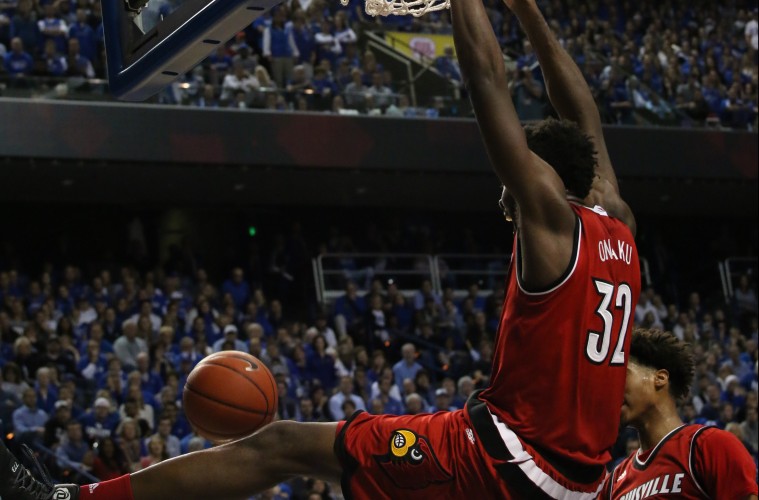 Fan Frustration Aside, This is a Great Louisville Basketball Team

Saturday’s 75-73 loss to the University of Kentucky goes into the annals of this series as one of many games that has broken my heart.  Just like the  Cedric Jenkins tip in from 1987, or the Patrick Sparks walk in 2004, Damion Lee’s missed three to win the game is another chapter in my personal book – “Macho Grande; the UK Losses I’ll Never Get Over.”

Missed Opportunities – If there was a year to get Cal and his team, this was it.  I watched the Wildcats play repeatedly this season.  Saturday’s team was not what had been on display.  For starters, they couldn’t shoot straight; until yesterday.  They didn’t share the ball as well; until yesterday.  They just generally looked like a UK team that was highly beatable, until yesterday.  Yet, once again, Cards fans are left with an empty feeling in their gut over what was there for the taking, but ever so elusive.

Louisville Changed – While Kentucky’s game was what we thought it would be (three point shooting aside), Louisville’s was different.  For large portions of the game, individual players hunted shots, focused on getting fouls called (that they didn’t get), and generally looking like a different version of the U of L team we have all known throughout this early season.  This Louisville team had made a living off of passing up a good shot for a great one.  That did not happen on Saturday in Rupp Arena.  Certainly the level of competition had something to do with Louisville’s change, but the change was noticeable nonetheless.

Encouraging Signs – There were plenty of encouraging signs from the game if you are a U of L fan.  For starters, Damion Lee and Trey Lewis are money.  Their steadying hand in big games is invaluable now, and will prove to be even more so as the season goes on.  Donovan Mitchell is a stud.  Enjoy him while you have him Cards fans, Donovan Mitchell is next level good, and it will not take four years for him to make it there.  I’d pay premium seat money just to go watch the kid jump.  Chinanu Onuaku is so improved it’s scary.  Had he been able to stay on the floor, his presence would have made a difference.  In the second half, Onuaku got every rebound that was in his zip code, and once his paws got on it, no one could take it away.  He has to learn how to avoid fouling.

Discouraging Signs – There were discouraging things as well in Saturday’s game.  Ray Spalding was lost out there for much of the game.  Inbounding turnovers, blown defensive assignments, and missed opportunities from the floor as well as the free throw line plagued his game.  He is super talented, and a home-grown kid.  He probably wanted this game too much and his nervousness showed.  Along with Spalding’s struggles was fellow Louisville native Quentin Snider.  The Ballard product, and ever efficient sophomore point guard, came into the game averaging nearly ten points per contest, yet failed to score against the rivals.  Perhaps more importantly, his one assist indicates just how much this squad struggled to share the ball.  (Eight assists for the game as a team.)

Defensive Lapses – Defensive lapses were critical.  In any close game fans, coaches and players will be able to look back at defensive lapses and ponder what could have been.  Uncontested three point shots, a blown assignment in the second half that led to a wide open dunk down low by UK, and a failure to have a hand in the face of Tyler Ulis when he stepped across half court were all issues that plagued this Louisville team in this highly winnable game.  More importantly, early in the second half Alex Poythress routinely cut to the high post of the zone defense, put the ball on the floor, and had his way with our bigs.  The adjustment was slow in coming.  Eventually, the Cards figured it out, but the spurt had happened.  In a two point game Louisville could have done without that spurt.

Officiating – I will not allow myself to blame officiating for the loss of almost any game.  (Looking at you Patrick Sparks.)  The bottom line is both teams had to endure some tough calls.  Matz Stockman was absolutely clobbered going hard to the basket in the first half, but Louisville nearly knocked a UK player into next week going for a loose ball with a no call.  So, the stripes were bad all the way through.  I thought that there were more tick tack fouls called on Louisville than Kentucky, and I thought UK players fouled Damion Lee a lot more than was called, but I am more than a little biased.  In the end, you can see why home court moves the betting line nationally by an average of three points.  At Rupp, I would suggest you could double that number.  Again, in a two point loss that’s a big deal.

Pitino Post Game –  There was more discussion about Rick Pitino, and his post game actions, than there was about any other element of this game.  It’s the lead story related to this game on ESPN.com, and I watched yesterday as more than one national correspondent weighed in on their thoughts about his skipping the post game press conference.  Look, if you are surprised that Rick wasn’t talking to the media after yesterday’s game, you haven’t been paying attention.  Folks who cover Louisville will tell you that Ralph Willard is very close to inking his own radio show deal after all his exposure to the media this year.

As for whether or not Pitino gave the fans the finger, of course he didn’t.  I only wish that he would have.  You can imagine the berating he took on the sidelines yesterday.  I was not there, and have read nothing specific, but Rupp is a rough place to play when the scandal isn’t hanging over your team’s head.  With that added to the mix, I can only imagine.  It looked to me like it was an “L” Rick threw up to the fans.  He says he didn’t give them the finger, and I believe him.  For the record and with all due respect, I give the finger to all UK fans I know.

Outlook – For Louisville, the sky is the limit with this team.  They won the battle on the glass by 10, they shot a season low 42.9% from the floor, and they turned the ball over 15 times, and they were a missed three from winning.  Once the defensive assignments are shored up, and the post play develops a bit more, this will be a scary good team in March.

As for the shot that Damion Lee took at the end; let’s just say if you have a sack big enough to take that shot, in that game, on that floor, Santa Claus would be jealous.  I wish he would have made it.  It was not the best look available, and I was praying for overtime, but I will never begrudge a kid who stepped up the way Lee did.  It would have been the best ending to one of these games I had ever witnessed.  Instead, it goes into my book.  “Over Macho Grande?”  “No, I’m afraid I’ll never be over Macho Grande.”