Devante Parker to Miss 6 to 8 weeks 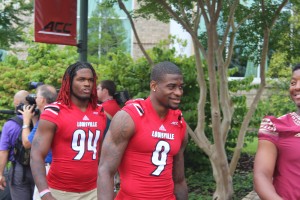 Head Coach Bobby Petrino announced today at a press conference that Senior WR Devante Parker will miss 6 to 8 weeks due to a broken bone in his 5th toe. He will operated on today. The surgery will be preformed by Doctor Bob Anderson. Anderson will be in the room when Parker has his medical evaluation at the NFL Combine.

“We’ll certainly miss him but we have to find a way to continue moving the ball,” Petrino explained.  “It’s unfortunate because he’s a great player but people will have to step up. I think we’re fortunate because we have experience at that position.”

“Our offense doesn’t really change that much. Will still have great guys that will step up,”  QB Will Gardner explained. “I don’t see our scheme changing much.I know our training staff will do a great job with him and they’ll get him back.”

It’s obviously devastating news for Devante Parker. Parker came back for his Senior year at Louisville when he could have left last season and possibly gone as high as the second round in NFL Draft. Considered a preseason All-American by many, he came back to improve his skill-set, draft stock and compete for a Championship. With that being said, there were many that thought Parker could potentially miss the entire season, it appears that will not happen.

The Depth Chart released today from Louisville replaced Devante Parker with Kai De La Cruz along with Eli Rogers, James Quick at the Wide Receiver positions respectively. You would also expect Michalee Harris and Matt Milton to get considerable playing time as well. De La Cruz shown promise in his Junior campaign catching 15 passes for 271 yards and three touchdowns after being hampered by injuries.

Mark Blankenbaker will have video of the Press Conference in full up today.

Residing in Louisville, KY (via Bardstown, KY). I write things about Louisville Sports. Sometimes you'll like them. Follow me @_ChrisHatfield Email me at chatfield60@gmail.com