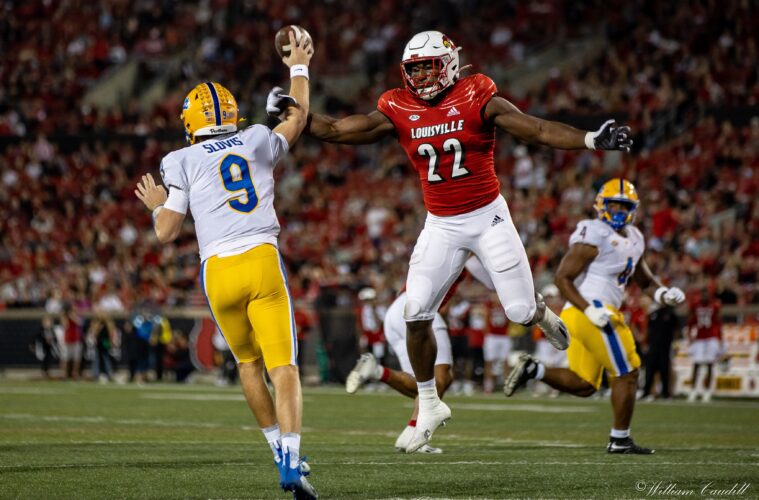 The University of Louisville football team saw 12 of its players claim All-Atlantic Coast Conference status as announced Tuesday by the conference office.

Chandler and Hudson started all 12 games on the offensive line as the Cardinals rushed for 193.4 yards per game. A preseason All-ACC selection, Chandler holds the school record with his 52 career starts. Hudson played a team high 852 snaps and earned the top grade at 92 percent.

Diaby made the biggest jump in production from 2021. Recording 1.5 sacks last year, Diaby finished his senior season with 33 tackles,  7.5 sacks and 11.5 tackles for loss. He was the Cards’ lone selection to the Reese’s Senior Bowl in January.

Turner was nearly automatic for the Cardinals, connecting on 19-of-21 field goal attempts. He connected on four field goals in Louisville’s 25-10 win over NC State on Nov. 19. The junior was second in the conference with an average of 1.58 field goals per game and third in field goal percentage of 90.5.

Clark earns All-ACC honors for the third-straight season after transferring from Liberty. The Richmond, Va., native recorded 51 tackles and an interception, returning it for a touchdown in a win over Pitt.

Brown started 12 games at offensive tackle, recording 53 knockdown blocks. He graded out better than 84 percent on the season as the Cards finished in the top 40 in rushing offense.

Plagued by injuries, Evans was third on the team with 525 yards rushing and six touchdowns in eight games. The transfer from Tennessee rushed for a season high 126 yards and score versus James Madison and added 106 yards in a win over No. 10 Wake Forest.

Ford was second on the team in receptions with 31 for 421 yards and two scores, while Gillotte recorded 22 tackles, 7.0 tackles for loss and 6.0 sacks.

Sanogo led the Cardinals in tackles with 86, registering double-digit tackles against James Madison (13) and Clemson (14).

Vassett averaged 44.6 yards a punt in the regular season, ranking third in the conference. The native of Melbourne, Australia, placed 17 punts inside the opposition’s 20-yard line and recorded nine punts of 50 or more yards.