Why Louisville Will Reach a Third Consecutive Final Four 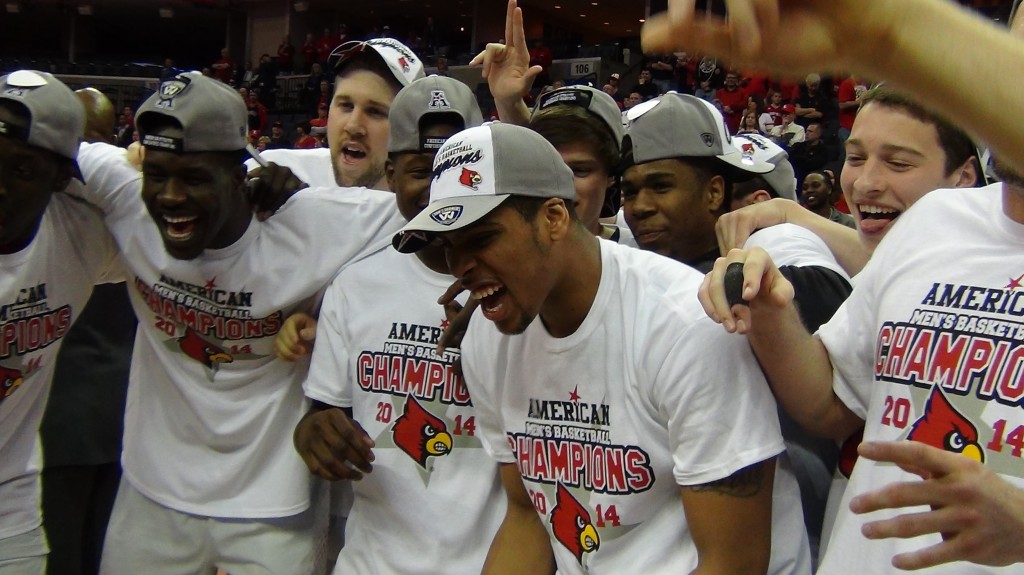 Sunday evening like most of you I was glued upon my TV watching the NCAA Tournament selections unfold.

Also like most of you, I found myself shocked with the seeding given to the Louisville Cardinals. A slap in the face — a four seed. Once I had allowed the shock and dismay to subside, I begun to study the bracket. As you might imagine, I remained fixated on the Midwest region. After a few moments of tinkering and thinking, I eventually came upon a grand conclusion: “Louisville is going to do this again. This actually is a pretty good draw.” Three days later I come to you with these same thoughts: Louisville is going to advance to a third consecutive Final Four and like last year, the fun may not stop there.

The first two rounds look kind for the Cardinals. Though a potential second round matchup with TJ Warren and NC State could provide a little resistance, Louisville should reach the Sweet Sixteen with expected ease. You know what Rick Pitino does in the Sweet 16? He wins. Unless you’ve lived under a rock for the past five years, you know the stat, Rick Pitino has never lost in the Sweet 16 – now a perfect 8-0. As we gleam about the possible re-occurrence of another ‘Dream Game’ featuring Louisville and Kentucky – a nightmare match-up for Louisville – the Shockers will protect their undefeated record and beat the Wildcats. While the Cardinals have been peaking, Kentucky has been tweaking. Sure UK has looked improved, but sorry Wildcats, two wins over NIT teams aren’t enough to make me believe you will spoil the perfection pursuit of Wichita State. The Senior leaden squad will use their “Jedi Mind Tricks” to fry the brains of the young Wildcats and Wichita State will again meet Louisville in the NCAA Tournament.

The Shockers may be 34-0, they may be better than the team that played the National Champs to the wire in Atlanta, but the lack of competition added with being placed with the bulls-eye upon their back will be Wichita’s undoing.

We’ve seen that before, ask Gonzaga how things went when they finally received the coveted number one seed.

The Wheat Shock also has another thing going against them — a stacked deck. It’s one thing to beat one blue-blood program like Kentucky as a mid-major, it’s entirely another to hold that to the next round and beat another blue-blood…especially when it’s you who have became the hunted. When the target is on your back, everyone’s approach to is different. It makes guys like Russ Smith and Montrezl Harrell even more motivated. That’s bad news for the Shockers. This matchup is where Montrezl Harrell becomes a household name – if he isn’t already – and dominates with 23 points and 12 rebounds en route to 77-69 victory. Rick Pitino shakes the hand of Greg Marshall, and Louisville fans send him Twitter messages telling him he’s welcomed to become the Cardinals coach once Pitino departs. Tim Henderson drops a couple threes for good measure, too.

In the Elite Eight the most likely scenario for Louisville would be facing Duke or Michigan. Both would be fun. With Duke you get Russ Smith vs Jabari Parker (!!!). Let me pause for a moment while we all collectively drool about that match-up//With Michigan you get the Wolverines looking to avenge a National Championship heartbreaker. While a lot of things have changed about that Michigan team, one thing hasn’t: Michigan fans still complaining that Trey Burke had a clean block on Peyton Siva. Like I said, either way is fun. I predict the Cardinals will meet Michigan, as the nostalgia tour of 2013 rolls on.

I actually like this match-up a lot for Louisville. Louisville has the advantage in a lot of places. The most glaring may be at Head Coach. There are few coaches who have had the type of success that Rick Pitino has had in the NCAA Tournament, Michigan Head Coach John Beilien is no exception. On average, Pitino has won in the NCAA Tournament 20% more of the time than Beilien. Head-to-Head, Pitino has only lost to Beilien once in eight tries, and two games in which Pitino teams came back from HUGE deficits.

With no Mitch McGary who has suffered a season ending injury, and no Trey Burke or Tim Hardaway Jr who were too good to stay another year in College Basketball; Michigan is a poor men’s version of the team that Louisville played in the title game last season. Speaking of last years Michigan team: Nik Staukas, a main contributor on this year’s Wolverine squad, had one of his worst games of the tournament in the National Championship being held to three points, just after a 22 point outburst against Florida. I don’t think Michigan can beat Louisville without a big game from Staukas, and I don’t think Russ Smith would allow that to occur. As you see, that’s what history would tell us too. Louisville’s guards would be the difference and Michigan wouldn’t present much down low that Montrezl Harrell couldn’t handle.

Given full disclosure that I have Louisville losing to Michigan State in the Title Game, my predictions stop in the Final Four because literally anything is possible, as we know. There are a variety of teams that Louisville could face that first night in Dallas ranging from Creighton, Wisconsin, Oklahoma State and Arizona. I do think Louisville would prefer the first two rather than the later. I know one thing about the Final Four if the Cardinals do indeed make it: It’s not a bad thing to bet on Rick Pitino.

If you don’t agree with me, consider the experts in Las Vegas that have Louisville favored against every possible opponent that they could meet in the NCAA Tournament. I know one thing about Vegas, those guys aren’t in the business of losing money, and I’ll get on the train to Dallas that will take the Cards to their 3rd consecutive Final Four.