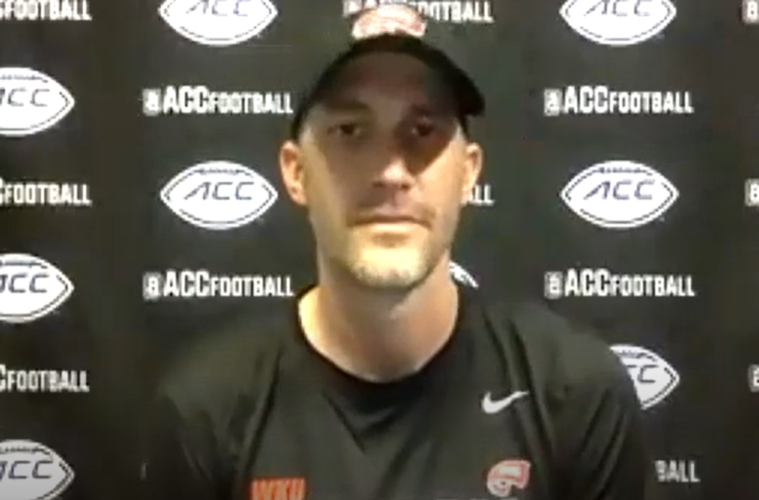 (On Louisville’s big plays in the first half, was their speed or coverage? What did you see?)

“It was a little bit of both. I think we, we had them backed up. We had them in some third and long scenarios and their players made plays. That’s what good players do, they got out there and make plays. They were able to make a couple of big plays on some third and longs, and obviously they hit some shots down the field. That was a goal for us to not give up those big plays, but they still found them. That was the story. Offensively, we didn’t do our part. We really didn’t get much going, here and there. We kind of found our way there at the end, but they (Louisville) pretty much dominated the game the whole time.”

(On Louisville’s ability to convert third downs on the defense, with so many players coming back how much of a concern is that?)

“We’ll see. Every game is a different story. Obviously, it wasn’t good tonight. They are a good football team, a talented team, but I felt that we were in some good positions to be able to stop them and we didn’t get it done. It’s tough also to play defense when you are out there a lot, our offense put our defense out there a lot… We need to make some plays on our own and let our defense get their wind back. A couple of times, they just got tired, and it is not their fault. That is why they call it a team game; we’ve got to help them out offensively.”

“He was okay. He was okay. He had a tough opponent that he had to go against and we all knew that, but I thought he kept his composure for the most part and all those kinds of things. He battled hard. Towards the end there, he got a little tired himself. He had run the ball and scrambled around. He’s got to get better. I don’t mean that in a bad way. Like I told the team, I said ‘hey we’ve all got to do a self-evaluation tonight, coaches, players and say what do we have to get better at. He’ll do that and I expect him to be better in game two than game one. I don’t think there was anything that he did that hurt us personally. I think the scenarios that we put ourselves in is what hurt us. It wasn’t the quarterback. It was the scenarios overall that we put ourselves in. And I’ve got to do a better job overall as an offensive coach. I’ve got to help him out better.”

“We wanted to be able to roll the backs a little bit, not have such a heavy load on Gaej (Walker) and we’d like it to be that way. Gaej is our guy, but we do want to get those other guys involved so we tried to do that. It was a little bit harder, just because we weren’t in a rhythm. We couldn’t really establish a good run game. So that was harder to try to get that rotation in there and get Gaej his touches and all those kind of things. Hopefully, you make the biggest jump from game one to game two and hopefully that’s what we’ll do on all facets and every series.”

(You guys were outgained by a little bit, had some missed opportunities but still in the middle of the fourth quarter you find yourself in the ballgame. What did you think about the fight that your team showed tonight to still put themselves in a position to make it a competitive game in the fourth quarter?)

“Well, we came into the locker room at half time and I didn’t have a long speech, I just said ‘I fully anticipate us to go out there and give ourselves a chance to get back in the game. I want to come out of this game, number one, winning the game but if we can’t come out winning the game then I want to know we played as hard as we could, did all the right things.’ I thought the effort was there, I thought the passion was there. I thought they gained some momentum. They started to make some plays; we did for a short period of time, have an opportunity to get ourselves back in the game. Good football teams find that way to win, and Louisville is a good football team. They were able to answer right back and pulled away from us again. That’s what we have to do next week, we have to do what they did tonight and have control over the game and play great on all three phases.”