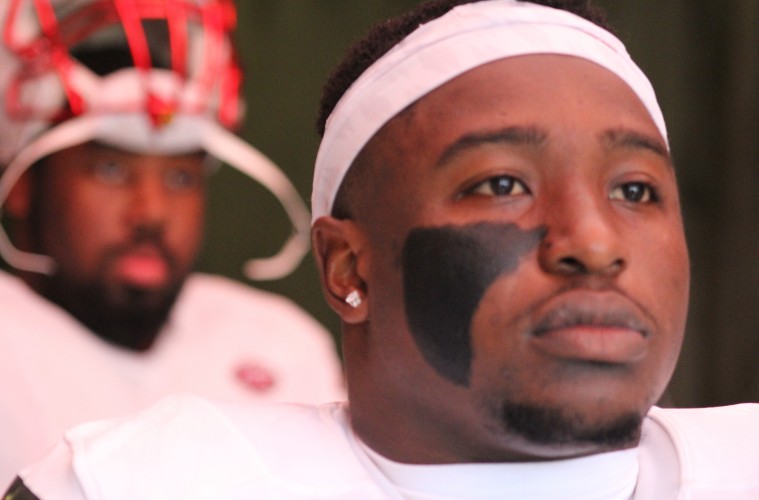 Here’s where things get interesting.  Louisville, in my opinion, had to augment its rushing attack based on Lamar Jackson’s presence last year.  Everything came out of the shotgun with Lamar on the field and when Louisville needed to ‘Run to Win’ in the 4th Quarter they actually had to change Quarterbacks to get under center and run the ball in a traditional way.  This inconsistency disrupted the involvement and rhythm of a position that probably relies on rhythm the most….the Running Backs.

This Spring there is a clear emphasis to get the Running Backs more involved in the offense, out of the shotgun, in pistol, or under center.  It’s difficult to say what the pecking order may be with this group but it’s easy to see thatBrandon Radcliff, Jeremy Smith, and LJ Scott will all be heavily involved.  Radcliff & Smith both appear to be a touch lighter while LJ may have added more strength to his upper body.  Malin Jones also has had some nice moments and appears to be more ready to make an impact than a year ago.  Trey Smith also opened Spring Practice at Linebacker and has since moved back to Running Back.

Reggie Bonnafon also is working at RB.  Bonnafon is all over the place during a Louisville Football practice.  He spends time with Running Backs, Wide Receivers, catching punts and occasionally throws a pass.  Reggie is dizzying to follow, but it’s clear he needs to be on the field. Last year UofL used Reggie mostly for outside runs out of the backfield.  Right now Reggie’s going to have a major role somewhere….and perhaps everywhere.  It’ll be fun to watch.

In the sessions we’ve been able to watch there is no tackling to the ground so evaluating Running Backs in an environment like that is nearly impossible.  LJ Scott, however, is clearly the best pass catcher out of the backfield. We’ve also seen wide receiver Traveon Samuel line up in the backfield in specialty packages that could confuse defenses in a variety of ways.

Louisville has a lot of experience at Running Back in 2016 and it looks like they aim to use them much more in 2016.  If this group gets the opportunity to produce and cashes in that would be a BIG net positive.

Post-Spring Thoughts on Running Backs:  Because UofL has so much experience at Running Back there is a clear void of youth within this group.  The coaches went out and got some Athletes that could eventually end up in the Cardinal backfield.  The good news is that it’s extremely unlikely that UofL will need any of those incoming backs to play in 2016……but there is no way Petrino can move into 2017, 2018 without having something in the pipeline so we’ll be anxious to see how Malik Staples, Malik Williams (potential WR also) and Dae Williams all look when they get to campus.