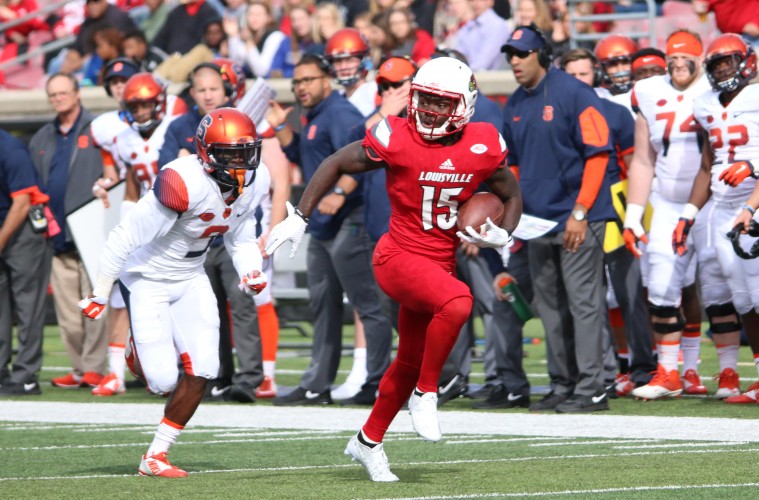 Starting at Safety one thing is as certain as anything we’ve seen this Fall……  DEE SMITH HAS TO PLAY.  Dee covers a great deal of space, shows great instincts and is disruptive in the passing game.  Of course, we need to see more of Dee’s tackling.

But the play of Smith may cause a shift in how Louisville’s secondary (and maybe the defense overall) is set up.  The Cards have a lot of really good safeties & corners in the secondary….it may have a void at outside linebacker.  As such, UofL has played some DIME in an attempt to get this talent on the field.  To utilize Dee Smith, don’t be surprised to see Chucky Williams move to Strong Safety .  Josh Harvey-Clemons of course will be at Star in the Nickel (as usual) and UofL will just slide Chucky & JHC over in BASE.  Chucky & JHC look as if they’ve picked up where they left off but Williams at SS would be a bit of a switch.  Doing this would provide Louisville with significant tackling in the defense it plays the most to go along with what looks to be an excellent deep cover guy.

At this point we also can’t count out or fail to mention Zykiesis Cannon who can also push for both safety spots.  Additionally Khane Pass has a lot of talent and after redshirting a season will be ready to find the field in various capacities.  The one player we can’t get a feel for is Terrence Ross who sat out 2015 with an ACL tear and has appeared in some of the practices we observed.  Ross has immense talent and was in favor in the latter half of the 2014 season with the Petrino & Grantham staff.  If Ross can come back, it would give the Cards another option at Strong Safety.

Josh Harvey-Clemons isn’t the only player we’ve seen at the STAR position.  Jaire Alexander has also spent some time there in an attempt to get him on the field more……and that’s kind of the idea with the DIME package.  If Louisville can get pressure it’s secondary can create extreme havoc.  Jaire has missed some time with injury this Spring so we will see if he’s available on Saturday but we at least learned that Alexander is an excellent option at Corner and seems to be available at STAR this year or in the future.

Shaq Wiggins & Trumaine Washington were excellent at Corner last year.  Washington was extremely disruptive in a variety of ways and had a string of causing turnovers for Touchdowns.  Wiggins proved that he can handle being on an island with some of the ACC’s best Wide Receivers.  We should expect that both Shaq and Trumaine both make leaps forward and play even better together.

Behind the Jaire, Shaq & Trumaine trio of corners is a very dynamic group.  Cornelius Sturghill is Louisville Football’s fastest player and Ronald Walker is an early enrollee JUCO (#2 overall CB in JUCO) and originally signed with Ole Miss out of high school.  Additionally the Cards have converted wide receiver Alphonso Carter from wide receiver in order to get his athleticism on the field.  Carter has been plagued by hamstring issues that occur when he runs straight ahead (when he runs routes) but isn’t as problematic when backpedaling in the secondary.  Devontre Parnell also continues to work at corner and has a lot of experience within the program.

Post-Spring Thoughts on the Secondary: Louisville has options……plenty of options….I mean THEY HAVE OPTIONS in the secondary.  Don’t be surprised to see the coaches do what they can to get the talent on the field and making accommodations for both Dee Smith & Jaire Alexander.  It will also be interesting to see how much highly rated prospects PJ Blue, Lamarques Thomas & London Iakopo factor given Louisville’s options already at Safety.  Also the Cards could stand to use another Corner to step up into the regular rotation so we’ll see if any outside of the trio can do that.