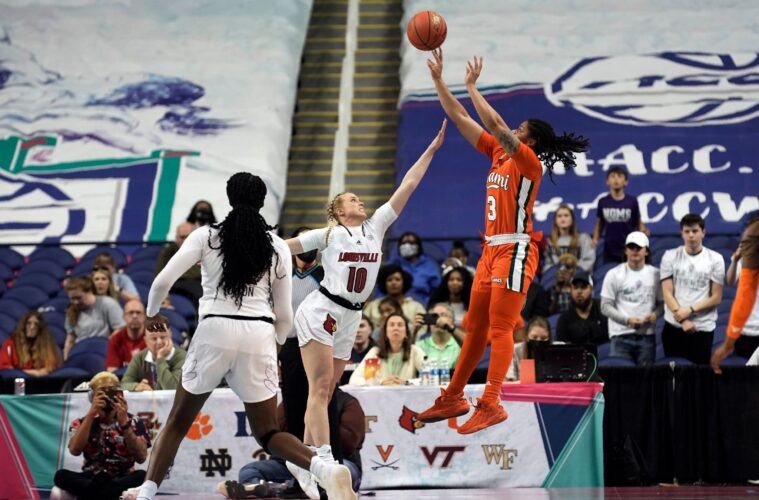 JEFF WALZ: First, just want to say congratulations to Katie, her team. They competed. They continued to compete. It’s what we told our kids. It’s a ballclub that will not quit no matter what the score is, and they just kept grinding and grinding.

I’ll take the blame for this. I tried to sub a little bit there at the end, trying to keep some fresh legs possibly thinking as you’re going through a tournament three games in hopefully three days, and we lost all of our rhythm offensively. And then we took some real poor shots, didn’t defend, didn’t guard. Everything that we needed to do to allow them to come back in the game, we did.

That’s unfortunate for us, and again, I’ll take the blame for it. I’m not going to put the blame on these kids. It’s my fault.

You’re trying to give some kids some minutes, and it’s just a tough situation to be in. And then when I put the other ones back in the game, we didn’t communicate. I mean, when we give up an and-one and then we give up a three, yeah, it was just nothing.

JEFF WALZ: Well, we were trying to get her coming off a ball screen and attack, and they did a really nice job on the hedge. And then we had an opportunity for a throwback, but you’ve got to get a shot up, and unfortunately for us we got stuck. Because if you get a shot up, then they’re not going to get an opportunity to get the ball back. There was only one second or 1.7 second differential between the game clock and the shot clock.

So our goal was to try to start attacking at about 8, 9, and then that gives you a chance to be able to attack off the bounce, but then make a pass if needed. And unfortunately for us, it would have been better off if they had stole it from us right there and then had to take a half-court shot.

But great execution by them. You’ve got to give Destiny Harden — what a ball game she had. The things that she did is exactly what we told our kids she would do. She posted us up on the low block towards the end of the. We just stood dead ass behind her. Then we said you’ve got to front her. You can’t do that. When we did front — you know, they turned it over several times throwing passes over the top, but it’s just a game — every possession matters.

It’s a tough lesson to learn, but it’s one that I hope we’re going to learn from and make some quick adjustments because you’ve got a good week and a half now to sit on this. And if this doesn’t sit in your gut and piss you off, I don’t know what to do for them.

But I also want to apologize for our fans. What an unbelievable group that we had come down here today for this tournament, and just appreciate them making that decision to come down and support us.

JEFF WALZ: Of course you do. Of course you do. What are you going to go hide under a rock? I mean, reality sucks, and I’m a big, big fan of it. Because if you’re going to go hide, you’re never going to go get any better. As a coach I learned a valuable lesson there today. I was trying to save some legs, trying to see if I could get everybody about — the most, about 30 minutes with some executions here or there. But unfortunately it didn’t work out, and then when I tried to put some people back in the game, they had been sitting for four or five minutes.

So yeah, it was a poor decision by me. There’s no question about it. But yeah, we’re going to watch it. I think you have to. Can’t hide from things.

Q. The last kind of five and a half minutes, you just couldn’t buy a basket. Was it something they were doing defensively or you guys kind of beating yourselves?

JEFF WALZ: Well, we had some really good looks. Ki’s three right there in front of the bench was halfway down and popped out. Chelsie had a really nice drive for a lay-up, and then we couldn’t get to the free-throw line, either. We needed to try to stop the bleeding by getting an opportunity to get to the line, and unfortunately we weren’t able to do that.

Q. For the first three quarters, your defense was all over the place. What were the positives you saw in that first part of the game and what changed down the stretch?

JEFF WALZ: Well, again, I’m taking — it’s my fault. I sucked. I had some bad combinations out there, and it kind of just threw everything off kilter. We didn’t communicate.

It’s one of the things I talk to all of our kids about is when you’re sitting on the bench, you really want to be engaged in watching. Okay, who’s making shots, who do I have to know, who’s out there, who’s hitting them. We went out there, and unfortunately it was like we hadn’t been watching the game at all. Knowing that you’ve got — 35 had just hit a three, Naomi. And it’s like guys, you can’t give her — and then we give her a wide open for a second one.

Again, it sucks, but it’s part of athletics. It’s part of life. You’ve got to either stick your head between your legs and go hide or stand up and take it. I say it all the time, it’s nice to sit here in front of the media when things go well and say how great it is, but this is part of it, too. You’ve got to be able to take the questions and admit when you screw up, and I screwed up. There’s no question about it.

Q. Jeff, eerily similar to NC State in January. When you look at that game and this game, I know you haven’t watched film, but did it seem similar for you?

JEFF WALZ: No, it’s the same outcome, but again, I had different combinations out in the game that I thought we’d be okay with just because we’ve done it before. But this is a bigger stage. It’s a bigger stage. We just did not respond well.

Q. Kianna, from a player’s perspective, are you guys going to linger on this loss and kind of dissect it or are you ready to just kind of focus on Selection Sunday and figure out what the next opponent is?

KIANNA SMITH: Well, Selection Sunday isn’t for another week or so, so all we can do is work on ourselves and get better and learn from this.

Q. As one of the leaders of this group, what do you tell the players so they’re not so down on themselves and you do learn from this the next week and a half?

KIANNA SMITH: I mean, obviously I wouldn’t say being down on ourselves is a bad thing because we have to be down — like that was awful. There’s no question about it. This is the second time that’s happened to us this year, and we have to learn from it and make changes. And the only way that you learn from something is reflecting on the game and reflecting on all your mistakes. That’s all we can do.

Q. You mentioned it’s the second time that’s happened. The turnovers today, I think even in the first half for you, Kianna, not just you, but what was it that Miami was doing that made turnovers so crazy for everybody?

KIANNA SMITH: I mean, I think personally, like it was — we got sped up, and we just didn’t play smart, driving into a couple people and playing a little bit too fast. Yeah.