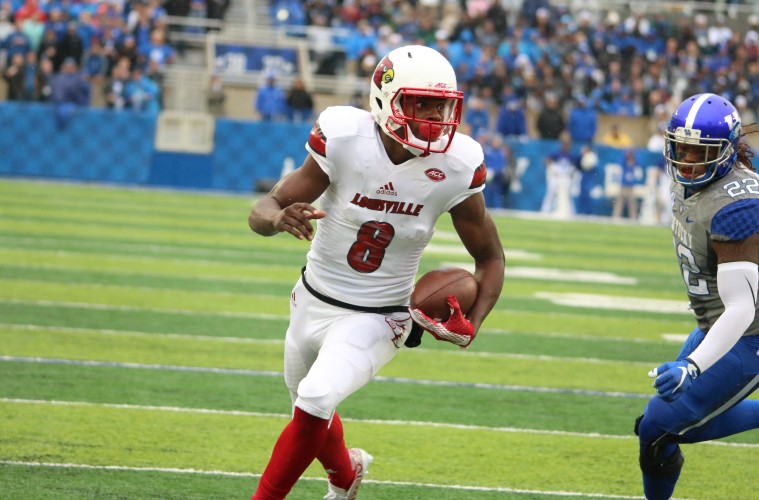 We’ve gone through and taken a look at how UofL has moved the ball through the air and on the ground.  But what about OVERALL?  What about scoring?  Below we take a look at how the Cards have faced moving the ball and putting points on the scoreboard against every FBS team UofL played in 2015.  We also take a look at how far the deviation was in each game & the % gained of their opponent’s average.  From there we should have a feel for how many total yards UofL should expect to gain and also how many total points the Cards should expect to score.

The Cardinal Offense played some outstanding defenses in 2015 and was able to gain at least 87% of the Average Allowed against each opponent.  Overall the Cards gained 31 yards OVER or 109% of its opponents average yards allowed. The best performance was against the best defense against Boston College when UofL gained 143% of what BC allowed for the season.

The Aggies are the 7th best defense Louisville will play this season and with Texas A&M allowing 367.2 yards per game we can expect that UofL will gain roughly 399-401 yards.

The A&M Defense did a fantastic job in many of its games of limiting opposing offenses.  Its best performance was of course against Vanderbilt when the Aggies allowed just 45% of what the Commodores gained during the season.

Louisville is the 6th best offense the Aggies will play in 2015 and with their usual performances UofL should gain 372-373 yards.

When it comes to scoring the Cards were much improved in the 2nd half of the season.  On the whole UofL scored about 3.4 points more than its opponents allowed on the year or 114.5%.

Texas A&M is the 5th best scoring defensive team Louisville will play in 2015 and with their 21.6 scoring allowed average combined with Louisville’s performance we can guess that the Cards will score about 23-25 points vs. the Aggies.

The Aggies did a great job of limiting scoring in 2015 with just 3 teams exceeding their average scoring performance vs. A&M.  Louisville is the 7th best scoring team A&M will face this year.

A&M on the year limited its opponents to 6.68 points under their average or just 76.54% of what teams typically scored. With the Cards scoring 28.8 points per game on the year we can expect UofL to score right at 22 points vs. the Aggies.