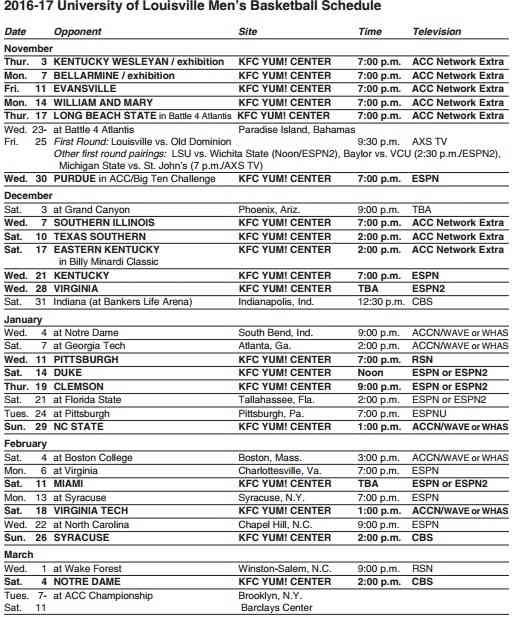 “Our schedule as planned is one of the toughest any team could encounter,” said UofL Coach Rick Pitino, whose team has played a schedule ranked among the top 16 toughest by the ratings percentage index (RPI) in seven of the last nine seasons. “The league travel is a bit unfair with a 9 p.m. home game on Thursday, followed by a 2 p.m. game at Florida State on Saturday. There’s also a road game on Saturday afternoon at Boston College, then next up traveling to Virginia on Monday.  That’s not mentioning our league opening game at home against Virginia sandwiched between Kentucky and Indiana, all followed with a game at Notre Dame.  But that’s the ACC.  The Battle 4 Atlantis, Purdue and at Grand Canyon — pass the Pepto Bismol.  Our saving grace is the attitude and work ethic of this team. We may be unproven and a bit inexperienced, but this group is talented and tenacious.  It should be a fun season!”

Including a pair of exhibition games against intrastate teams, eight of the Cardinals’ first 12 games will be played at home in the KFC Yum! Center, UofL’s spectacular 22,000-seat home arena.  The Cardinals will face their first outside competition in an exhibition game on Nov. 3in the KFC Yum! Center against Kentucky Wesleyan, followed by Bellarmine on Nov. 7.  Both were NCAA Division II Tournament participants last season.  UofL officially opens its season on Nov. 11 against Evansville, followed by a Nov. 14 home game against William and Mary.

The Cardinals will face Long Beach State at home on Nov. 17, the first of four games in the Battle 4 Atlantis.  Old Dominion will be the opposition on Nov. 23 in the first round of the event staged at the Atlantis resort in Paradise Island, Bahamas.  The Cardinals’ game will be the fourth of the day, tipping off at 9:30 p.m. in a game televised by AXS TV.  The other first-round matchups include Wichita State vs. LSU (noon, ESPN2), Baylor vs. VCU (2:30 p.m., ESPN2), and Michigan State vs. St. John’s (7 p.m., AXS TV).

The Cardinals return home to face Purdue in the ACC-Big Ten Challenge on Nov. 30 at 7 p.m. on ESPN.  Louisville will Grand Canyon in Phoenix, Ariz. in its first true road game of the year on Dec. 3.  The Cardinals will play their next four straight at home, beginning with Southern Illinois on Dec. 7, Texas Southern on Dec. 10, Eastern Kentucky on Dec. 17 and Kentucky on Dec. 21 (ESPN).

The Dec. 17 game against Eastern Kentucky is the 15th Annual Billy Minardi Classic, an event named in memory of Pitino’s brother-in-law who died in the Sept. 11, 2001 terrorist attacks on the World Trade Center.   Former UofL Director of Video Operations Dan McHale is the second-year head coach of EKU.

Louisville’s ACC schedule will include a challenging slate of 18 games, including two games each against Notre Dame, Pittsburgh, Syracuse and Virginia — all NCAA Tournament participants last season — as each league team will face 10 opponents once and four twice.  A Dec. 28home matchup with Virginia leads off the Cardinals’ ACC schedule.

Louisville will close out 2016 and play its final non-conference game against Indiana at Bankers Life Arena in Indianapolis, Ind. on Dec. 31in a CBS-televised game.

The ACC Tournament will be staged at the Barclays Center in Brooklyn, N.Y. on March 7-11.

Ten lettermen, including starters Quentin Snider and Jaylen Johnson, return for Louisville, which posted a 23-8 record during the 2015-16 season, finished fourth in the ACC and beat two Final Four participants in North Carolina and Syracuse. It was the 14th consecutive season UofL has won 20 or more games and the Cardinals were ranked 16th in the Final Associated Press national rankings.  UofL’s 146 victories over the last five years are the fifth-most in the nation in that stretch.  Louisville has received NCAA Public Recognition Awards each of the last four years for ranking among the top 10 percent nationally in men’s basketball in the Academic Progress Rate, which measures academic eligibility, retention and graduation for student-athletes.

The complete schedule is available is attached.

The Cardinals will compete in a pair of public Red-White intrasquad scrimmages in the KFC Yum! Center on Wednesday, Oct. 12 and Friday, Oct. 21, the latter of which is presented by Mark’s Feed Store.  Both games will start at 7 p.m.

Mark’s Feed Store will sponsor a coat drive for the Oct. 21 scrimmage, with fans encouraged to bring a new or gently used coat to donate.  Collection areas will be available at the arena entrances.

Tickets, priced at $10 each, will go on sale beginning at 10 a.m. on Tuesday, Sept. 13 at the UofL Ticket Office, located near Gate 2 of Papa John’s Cardinal Stadium at 2800 South Floyd Street. The ticket office is open weekdays from 9 a.m. until 5 p.m.  Tickets will also be on sale at that location at each of the Cardinals’ two home football games prior to the scrimmages.

A limited number of tickets are available for UofL students to each scrimmage at no charge. Student tickets — no more than two for each scrimmage — must be obtained with a valid student ID in advance beginning Tuesday, Sept. 14 at 10 a.m. at the UofL ticket office.